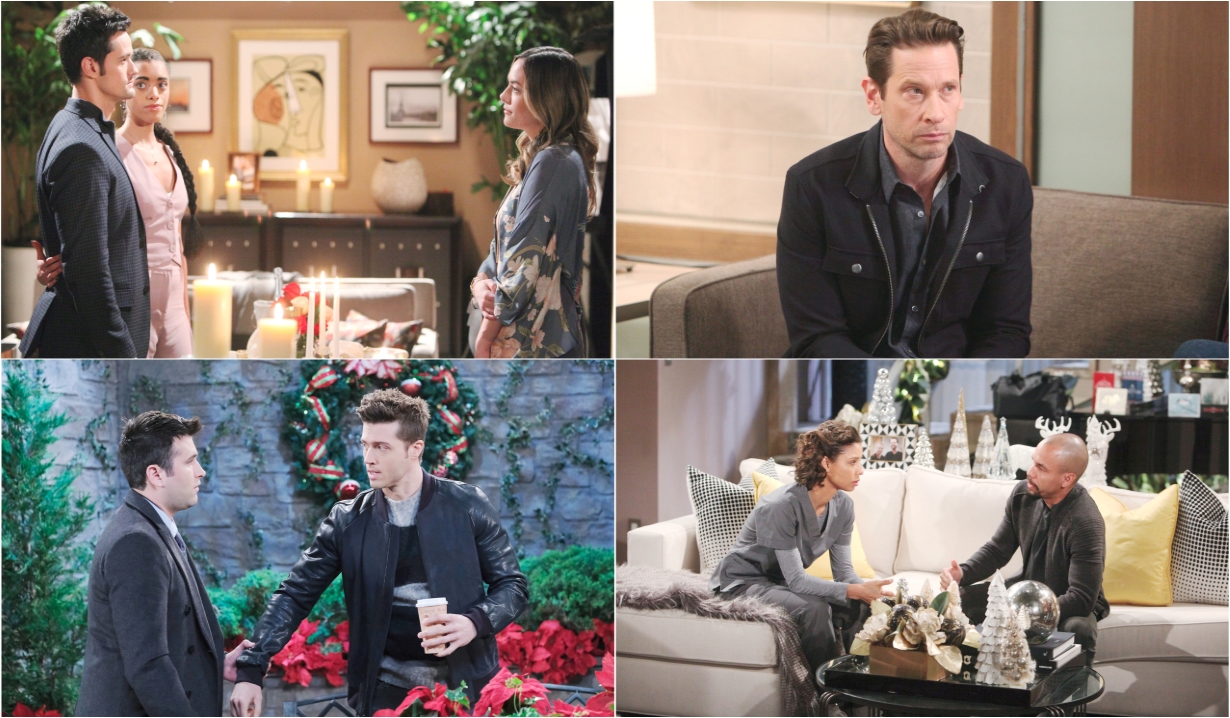 Soaps.com brings you a glimpse of what’s on the way with the latest spoilers for the week of December 16 – 20 for The Bold and the Beautiful, Days of our Lives, General Hospital, and The Young and the Restless, plus Days and GH spoilers from December 23 – 27.

Heartbroken Brooke wonders if there is a way forward for her and Ridge. That will depend on him taking the blinders off when it comes to Thomas. When Ridge comes to Brooke with an offer, will this be because he’s finally seen the light? Meanwhile, Steffy and Liam learn even more about Thomas’ unbalanced behavior when they bump into Zoe on their hunt for Vinny. They manage to convince Zoe to help them in their scheme to end Thomas’ reign of terror. Steffy offering Zoe a job at Forrester is a big part of this. But they will have to work fast since he has put a new scheme to win over Hope in motion. Hope is baffled when she sees Thomas making romantic gestures to Zoe. Check out Soaps.com’s The Bold and the Beautiful spoilers to learn what Liam is reluctant to do.

Wanting what’s best for Sonny, Will agrees to make a sacrifice in the hope that it will make him happy. Whether he’s happy or not, Sonny is still getting closer to Evan. Ciara’s attempt to get closer to the truth hits a wall when Xander gets in the way of her investigation. Victor is not happy to learn that she is snooping. Eve is overjoyed to learn that she’s been cleared of charges since there is no new evidence against her. Meanwhile, Lani and Kristen are determined to get what they believe they are entitled to. Gabi is shocked when Kristen places a call to her. Across Salem, Marlena is getting fed up and issues an ultimatum to John about his relationship with “Hope.” Princess Gina, however, is more concerned about Rafe since the detective manages to corner her in her secret spot. Roman realizes that Kate has a secret spot of her own and appears to be hiding someone in it, and Chad grills Kate about his father. Read the Days of our Lives spoilers to discover who drops in on Stefano.

Jax’s week is not going the way he was expecting, but how will his surprise compare to Nina’s? She stumbles on the truth and quickly storms off to confront her Aunt Liesl about it. Meanwhile, Valentin has something to smile about. This may be because Lulu has nothing to smile about. As she feels helpless, Chase may be feeling something similar when he turns to Finn with an admission. Meanwhile, Jordan isn’t in the mood to be forgiving, but Nelle doesn’t seem to care about the ways people are reacting to her. Although she manages to keep her cool, the same can’t be said of Julian, who blows his top. Across Port Charles, his sister has actually managed to regain control of her situation. Ava plots her next move while Franco’s move doesn’t turn out the way he was hoping and he’s left disappointed. Take a look at our General Hospital spoilers to find who has a disagreement.

The bond between Amanda and Billy grows as she tells him about being an orphan. Is this the same thing that Devon is learning as he digs into her past? Elena is not happy to learn that he has been digging into the life of another woman without telling her. Meanwhile, Nate and Abby try to put their conflicts behind them while the conflict between Nick and Chelsea comes to a head. After Nick makes a major sacrifice for her sake, how will she cope with the new reality she faces? Across Genoa City, Victor and Nikki try to change things for the Newman family following a conversation he has with Victoria. Over at Jabot, Kyle and Summer continue to work together as Jack’s presence becomes more profoundly felt at the company. After Jack spends some time bonding with Theo and Traci, Phyllis opens up to him about her problems as she plans to get revenge. Visit The Young and the Restless spoilers to learn who else is hiding a secret.