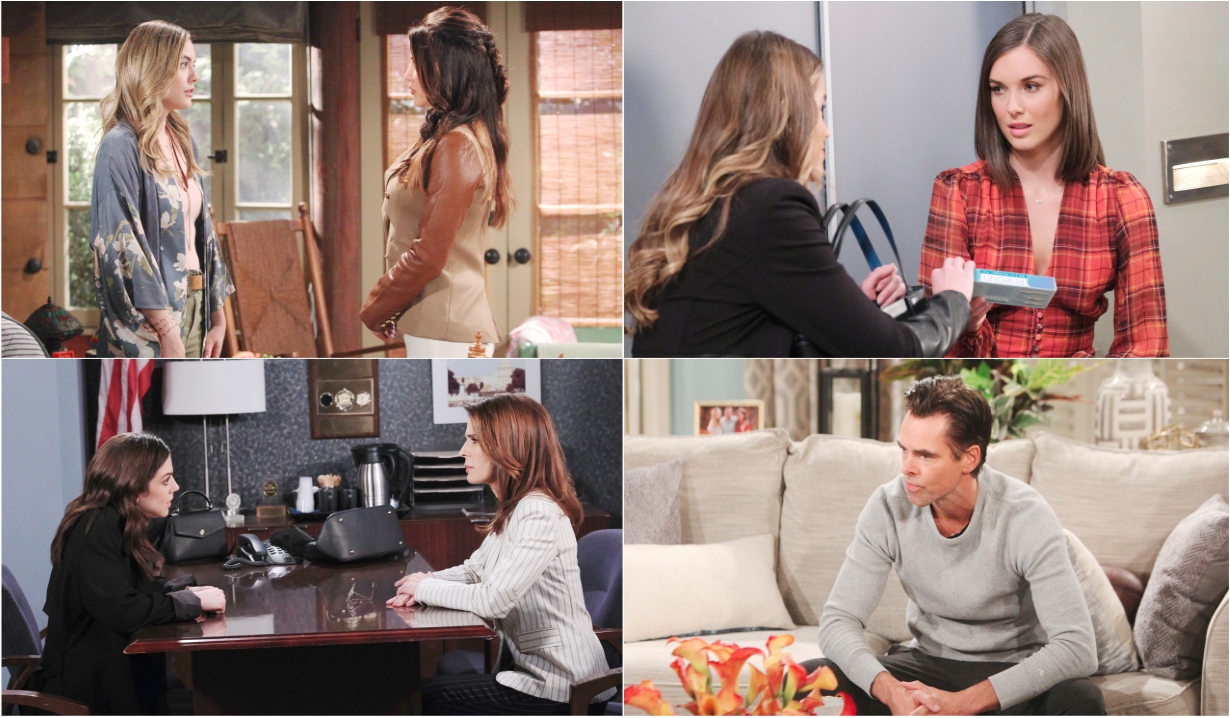 Soaps.com brings you a sneak peek at what’s in store with the latest spoilers for the week of December 9 – 13 for The Bold and the Beautiful, Days of our Lives, General Hospital, and The Young and the Restless, plus Days and GH spoilers from December 16 – 20.

Hope remains a point of tension between Steffy and Thomas. But regardless of what she says to her brother, Thomas remains adamant that he can keep Hope in his life. He tries to talk her into working with him in a fashion competition for Forrester. This only spurs Steffy into competitive mode and she becomes determined to square off against Hope. Liam starts to worry about the battle that is looming. These worries only build after what Zoe tells him about Thomas and Vinny. As Wyatt is prompted to admit that his apparently stable relationship with Sally is actually rather ‘complicated’, Shauna either complicates or clarifies something for Ridge. She lets him know that she loves him and Thomas throws his support behind her to keep his father away from Brooke. Check out Soaps.com’s The Bold and the Beautiful spoilers to learn what happens after Brooke and Ridge sign divorce papers.

Still reeling, JJ faces Kristen and tears into her for her part in Haley’s demise. Lani manages to get there in time to beg him not to destroy the DiMera. Things aren’t looking a lot better for her little half-brother. Gabi is doing everything in her power to have Chad booted from the DiMera mansion permanently. Meanwhile, Abby tries to get some answers out of “Hope” about what happened the night that Jenn was pushed to her almost death. This is enough to make “Hope” start wondering if Abby should be next in line for a shove. Across Salem, a secret of Kate’s comes out but that seems to be of less concern to her than when she hears that Sonny has been swapping spit with Evan. As Kate fumes, Nicole tries to give Eric something to cry on as he hears the news about Mickey. While Eric joins Sarah to make a hard choice about their daughter, Justin has a hard time when he has to face Will. Read the Days of our Lives spoilers to discover what Xander is suspicious about.

Liz has something to feel very grateful for, but she’s not sure she can really show it. The nurse also has some serious questions that need answering. Carly is feeling the same and is starting to get paranoid. To her surprise, Ava manages to capture her curiosity and keeps her distracted while Sonny continues refusing to face what’s happening in his life. Nina could be in for a major life change as she ponders getting involved with a new business partner. She might make up her mind fast after what happens next leaves her appalled. Meanwhile, even behind bars, Nelle continues to be a pain. She makes a decisive call while Willow goes into shock. Having Chase make a big discovery is only likely to complicate things. And Michael gets some help when he needs it while Anna could use a lot more help than she’s getting. As Anna deals with something disturbing, Ned is disturbed by the questions that come his way. Take a look at our General Hospital spoilers to find who is sabotaging Peter.

Kyle is smiling about things going his way again. But he might not be smiling for too long because things are changing at Jabot once more thanks to Jack. Some things never change though, and among those seem to be Billy’s bad habits. As Billy is drawn closer to Amanda, Devon is wishing that he could get closer to her and Victor just wishes that the woman would get out of Genoa City. When the mustache isn’t pondering how to do that, he works with Nikki to help protect Nick from the latest mess in his life. Meanwhile, Adam is busy manipulating Phyllis every way he knows how. Things don’t seem to be working out for her since her scheme to outwit Chance fails. Sharon is also failing at something, and Mariah warns Summer that she could be in for a world of hurt. Visit The Young and the Restless spoilers to learn who tries to make amends to Abby.

Soap Stars Ring in Holiday With...