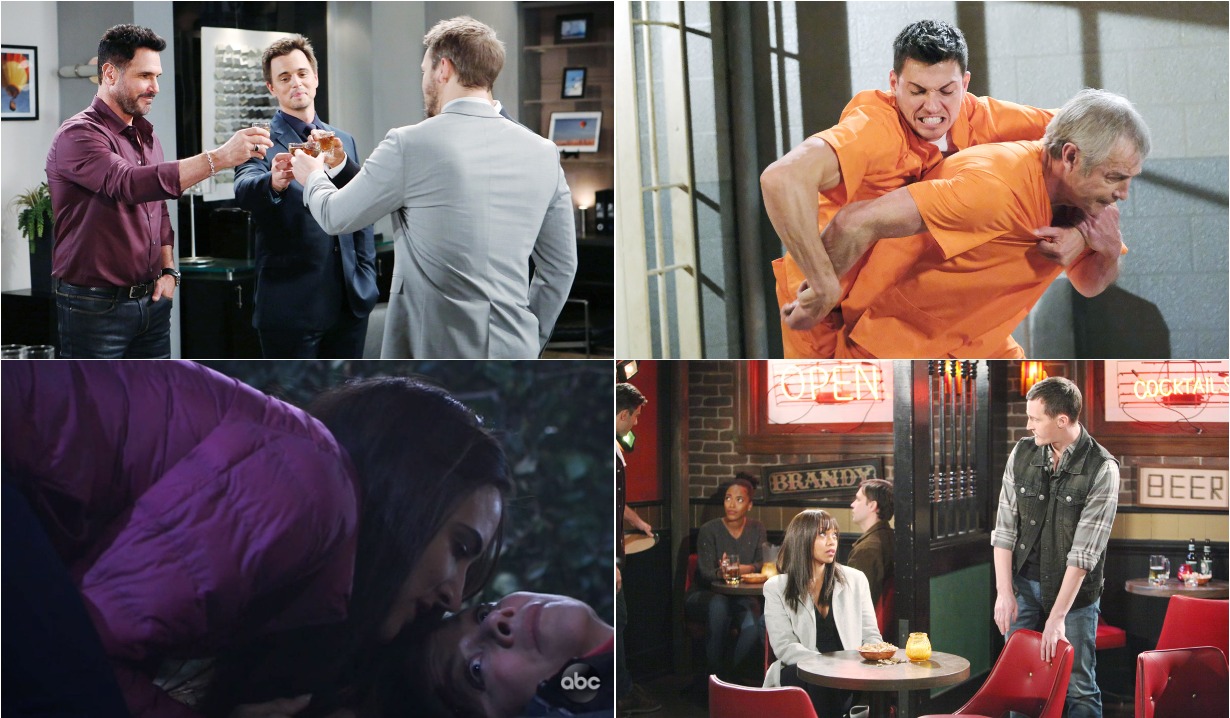 A kiss, a trip to Rome, an important project and a surprising move.

It’s the last month of the year and Soaps.com has highlights from the week of December 2 – 6 for Bold and the Beautiful, Days of our Lives, General Hospital and Young and the Restless, as well as soap opera teasers for what’s about to go down…

First on The Bold and the Beautiful, Shauna told Ridge that she loved him, and they shared more kisses. While Ridge presented Brooke with divorce papers, he didn’t want to go through with it and asked her if she could forgive Thomas. Liam didn’t approve of the time Hope had been spending with Thomas and Douglas, while Steffy realized Thomas was using Douglas to lure Hope back to working at Forrester. Coming up: Hope and Steffy go head to head in a fashion competition.

On Days of our Lives, in prison, Clyde tried to shank Will, but Ben saved him and ended up getting knifed in the side. Eric told Sarah that he would agree to joint custody of Mackenzie, but Xander could not be a part of her life. Later, Mackenzie was rushed to the hospital with a fever. Eli and JJ both headed to Rome to track down Kristen, who was hiding out in a convent with Lani as they both prepared to take their final vows and become nuns. Coming up: JJ holds Kristen at gunpoint.

More: Have fun with our Hallmark drinking game

Over on General Hospital, the Quartermaines had another disastrous Thanksgiving resulting in their normal pizza dinner. Brad and Lucas’ car crashed into Kendra’s car, killing her before she could run down Alexis. Brad had minor bumps and bruises, but Lucas suffered brain trauma and was put into a medically induced coma. Nikolas pretended to be a ghost and haunted Ava in order to learn where the portrait of Helena was, but Nina later suspected Nikolas was alive. Coming up: Laura sabotages Peter.

Lastly on The Young and the Restless, Chelsea moved in with Adam to help Connor deal with his issues, and nobody was onto the fact that Connor was manipulating the situation to get his parents back together. A storm blew into Genoa City, stranding several citizens in various locals across town, and left Billy struggling to figure out what to do with his life. Several guests at the Grand Phoenix ended up having their rooms robbed. After Abby fired Phyllis for using her security system to spy on her, Chance discovered that Abby was the thief. Coming up: Jack makes big changes at Jabot.