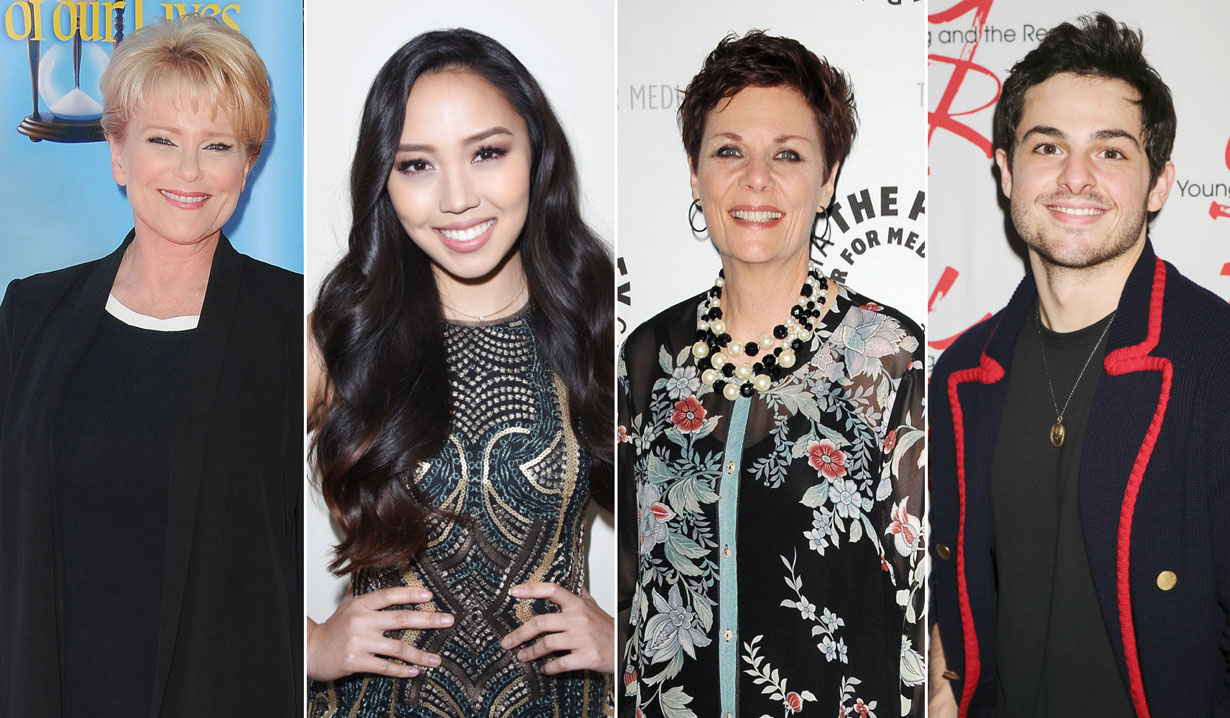 Soap opera returns and departures for November and the holidays.

November’s comings and goings on Soaps.com included contract changes on The Bold and the Beautiful, some huge character deaths on Days of our Lives, a big return on General Hospital, and several quick visits on The Young and the Restless.

On The Bold and the Beautiful, Denise Richards signed a new contract to continue playing Shauna Fulton, while Adain Bradley was moved to recurring status as Xander Avant and Alley Mills was also taken off contract as Pam Douglas. Dick Christie was back onscreen as Charlie Webber, and Katrina Bowden is taking time off to film a movie. Read Soaps.com’s The Bold and the Beautiful Comings and Goings to learn more about Bowden’s absence.

On Days of our Lives, the time jump claimed several lives, most notably Judi Evans’ character Adrienne Kiriakis. Thia Megia’s Haley Chen was also left dead, as was Jordan Ridgeway played by Chrishell Stause Hartley. Harper and Sydnee Udell were out as Arianna Horton, who was aged and briefly played by Kingston Foster before Sydney Brower takes over the role. Jay Kenneth Johnson is returning as Philip Kiriakis for the digital series The Last Blast Reunion and could appear on Days of our Lives. Deidre Hall began playing double duty when her doppelganger Hattie Adams reappeared. James Read was also back as Clyde Weston. Remington Hoffman, who played Li Shin in the digital series Chad & Abby in Paris, will join Days of our Lives next year. Tionne ‘T-BOZ’ Watkins is also set to return as Sheila Watkins. In a cast photo from the set, Emily O’Brien was spotted leading to speculation that she may be joining the show. A leaked photo teased Brandon Barash’s return, though as who remains to be seen as his character Stefan DiMera was killed and his heart donated to Julie Williams (Susan Seaforth Hayes). Finally, Stephen Nichols returned as Steve Johnson, but with Stefano DiMera’s memories implanted in him. Read Soaps.com’s Days of our Lives Comings and Goings to learn more about who O’Brien could be playing.

Anthony Montgomery was back as Andre Maddox on General Hospital, as was Vernee Watson as Stella Henry. Amanda Setton joined the ABC soap opera as a recast Brook Lynn Ashton, and her on-screen father Ned Quartermaine was back, played by Wally Kurth. Jessica Tuck was out as Cassandra Pierce, Tamara Braun exited as Kim Nero, followed by Rebecca Budig leaving Port Charles as Hayden Barnes. Risa Dorken will be back as Amy Driscoll. And Jane Elliot is bringing Tracy Quartermaine back. Read Soaps.com’s General Hospital Comings and Goings to learn more about Elliot’s return.

On the Young and the Restless, Donny Boaz took over the role of Phillip ‘Chance’ Chancellor IV. Jeffrey Vincent Parise departed as Simon Black. Tristan Rogers made a brief return as Colin Atkinson. Doug Davidson was also back as Paul Williams, as was Eileen Davidson as Ashley Abbott.  Daniel Goddard departed as Cane Ashby. Alyvia Alyn Lind will be returning as Faith Newman, and Zach Tinker is also coming back as Fenmore Baldwin for the holidays. And The Real Housewives of Beverly Hills’ Justin Sylvester will appear on the soap. Read the Young and the Restless Comings and Goings to view Goddard’s goodbye message to fans.