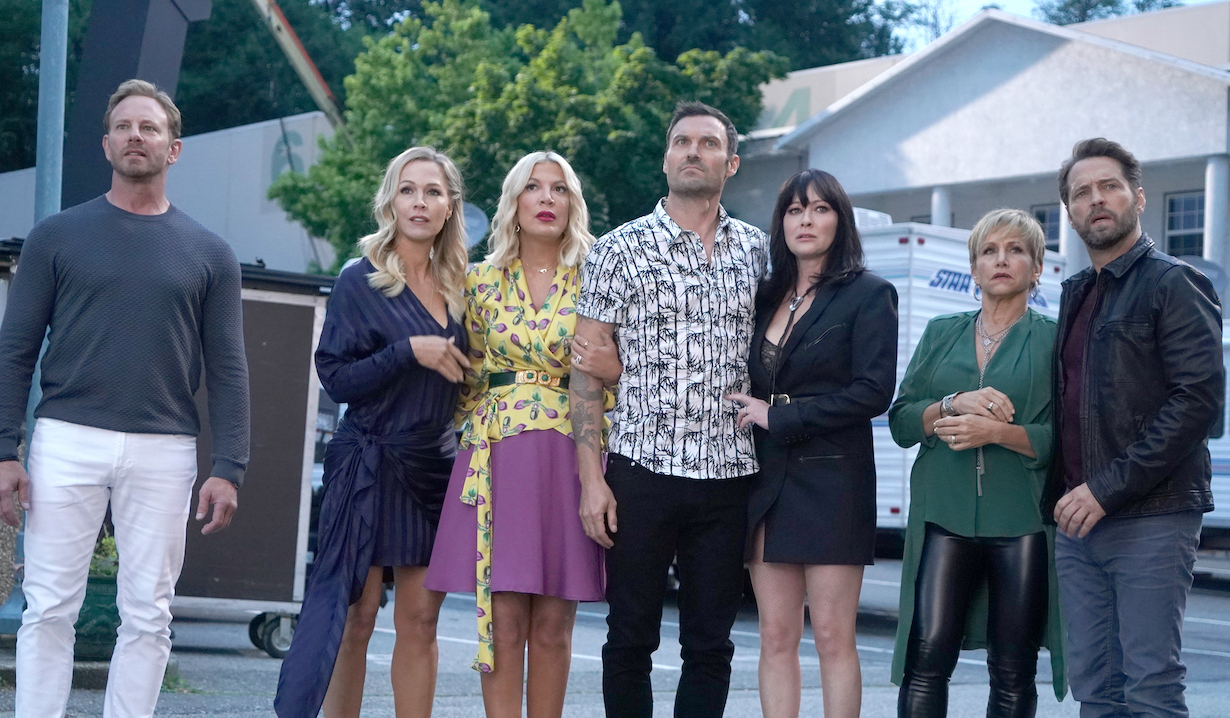 One mystery was predictably solved, while another intensified.

Soaps.com has the latest recap of BH90210, which continued to entertain this week. Though, strangely I had to keep reminding myself that Luke Perry would not be popping up. His absence is the only negative for me about this show, which obviously can’t be helped. Though, I would like a few more mentions of him especially now that Shannen Doherty is playing a more prominent role. Regardless, I’m loving this reboot, the heightened relationships on display and this week’s cliffhanger that deepened the stalker mystery. 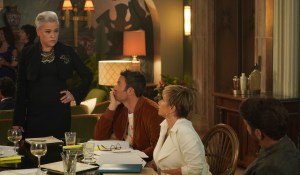 After Steve further insults the head writer Anna, the cast gathers for the first table read at the studio. Jennie and Jason remain snarky (which is still fun but has lost something in the absence of sexual tension) and Shannen’s not there since she hasn’t finalized her deal yet. After reading the script for the pilot, Brian isn’t sure if it’s supposed to be a comedy or a drama and also, as a lawyer, why is he shirtless? Jason calls it retro, Gabrielle calls it anticlimactic and Jennie says it makes her want to slit her wrists. (Never change Jennie!) Jennie’s daughter Kyler (who insisted on auditioning to prove herself, but wasn’t very good) runs out, mad she’s been reduced to little more than a featured extra. Ian jumps to Anna’s defense suggesting the script has potential, but no one takes him seriously considering he got a great monologue and an action sequence. Christine snaps they shoot in two days so they better get a script together they do like. 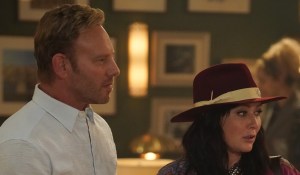 The cast meets at the exclusive club Jason belongs to with Anna to go over their notes, but she storms out when communication breaks down. Ian finds her and explains they just want the show to be good. When she threatens to quit, he gives her the keys to his car so she can sit somewhere quiet and collect her thoughts. Ian goes back to the group and films them fighting as well as making up. He sends the videos to Anna for inspiration. Shannen (who held out for twice what the rest of the group is making) finally shows up, but bolts upon hearing about the stalker, the terrible script and the threat of getting sued by the studio if they don’t produce something. 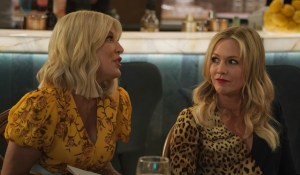 Jennie (who learned hot bodyguard Wyatt was being reassigned because there aren’t any more stalker threats, but then found a knife in her car’s tire) finds Kyler elsewhere in the club. She assures her daughter there will be bigger acting parts and that she’s a much better actress than she was at her age. Kyler thanks her and then confesses she is the one who slashed her tire because she saw how happy Jennie was with Wyatt around. Meanwhile, Tori explains to Brian that Nate isn’t comfortable with them having sex scenes, as Nate and Shay walk in. Tori takes it personally when Nate gushes to his wife about how amazing and unlike all other celebrities Shay is. Later, Brian finds Tori cutting fruit at the bar to de-stress. He once again talks her down by telling her how amazing she is. 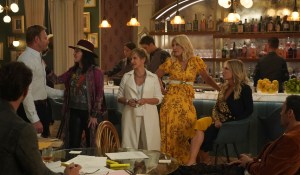 After the women convince a meditating Shannen to stick with the reboot, Anna returns to the club with her rewrite. They have another table read and everyone applauds her honoring the characters and the show’s history. As Jason busts out the champagne to toast the fact they have something to shoot the next day, Brian sees an upset Shay on the phone. She tells Brian she had an investigator look into the fact that someone leaked one of her songs. It turned out to be her stylist, but since she doesn’t trust Zach, she had him investigated too. She shows Brian a video the investigator found of Zach at the reunion’s Q&A as well as photos he took inside Zach’s creepy apartment. When Brian confronts Zach, he admits he’s Brian’s son. The most shocking thing about this reveal is how anticlimactic it is.

As Wyatt walks Jennie out to her car, he admits he knows Kyler is the tire slasher but he was happy for a reason to stick around. As they move in to kiss, he stops and says he can’t get involved with a client. Since she’s feeling pretty safe, she’ll call to have him reassigned. If he wants to stick around, it will be off the clock. Meanwhile, Gabrielle finds Christine in her office working late. Despite an awkward non-date and backing away from a near kiss earlier in the episode, Gabrielle walks over and plants one on her.

The threat is real 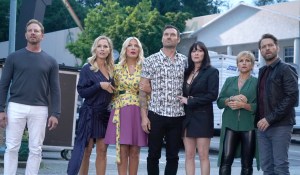 As the cast exits their trailers the next day, Anna tells Ian she’s glad she was wrong about him, Jennie reveals to Tori she has a date with Wyatt, Tori confesses to Jennie she’s having feelings for Brian again (which I’m torn about because they’re super cute, but I also like Brian and Shay), Shannen encourages Brian to bless his mess, and Gabby shares with Jason how well things went with Christine. When they all meet up to walk to set together, they see a door with the words, “Stop acting like I’m not even here” painted on it. The doors open, revealing the set is on fire.

I love the mystery of this! Who do you think the stalker is? Tiffani Thiessen? Hilary Swank? (Wouldn’t that be amazing?) Jamie Walters? Or, since Denise Richards has been cast on BH90210, could it be her? Give us your best theories below. 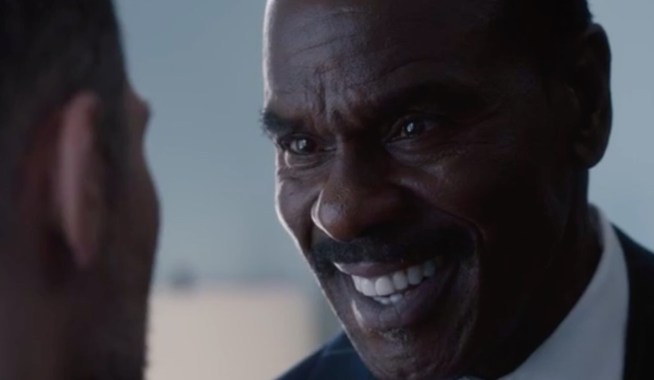 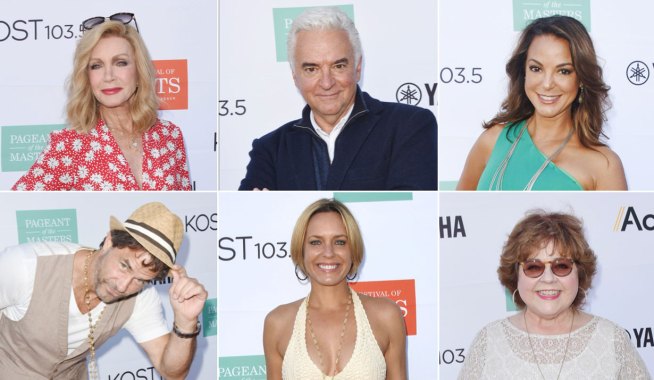