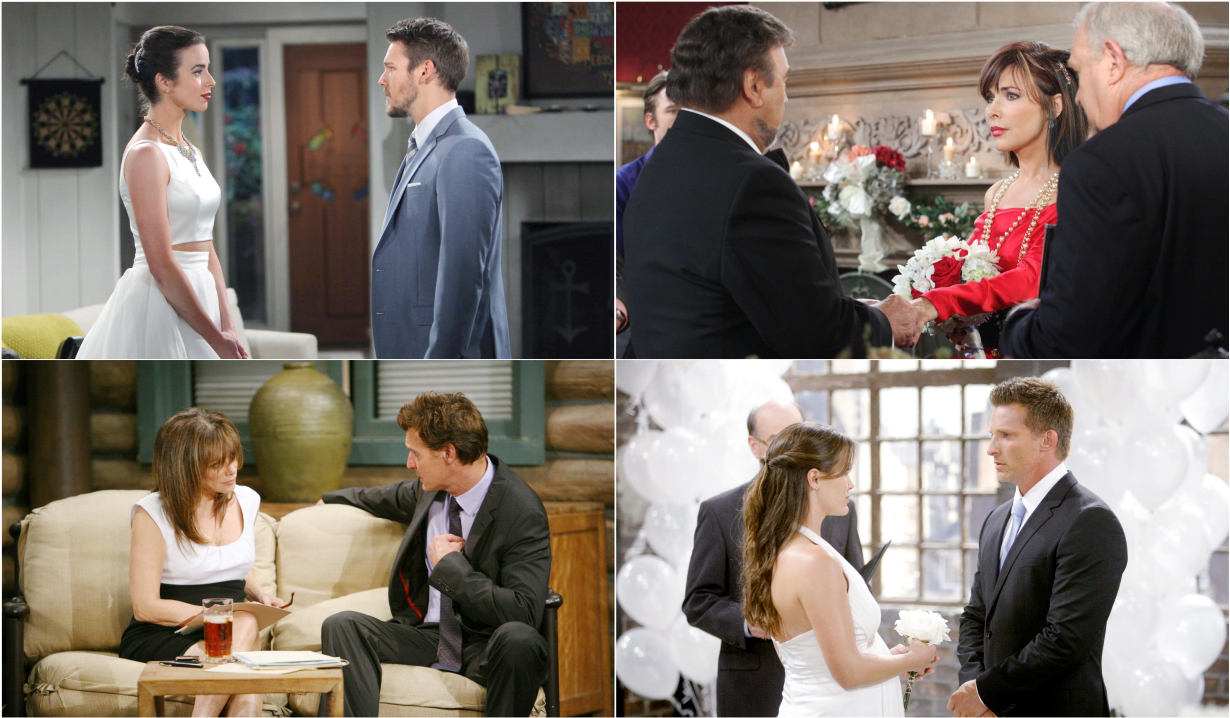 Their backs to the wall, these soap opera characters got married to fix their problems.

Days of our Lives’ Jack Deveraux (Matthew Ashford) and Eve Donovan (Kassie DePaiva), and Tripp Dalton (Lucas Adams) and Haley Chen (Thia Megia), and The Young and the Restless’ Kyle Abbott (Michael Mealor) and Summer Newman (Hunter King) are all currently in marriages of convenience. It’s a familiar soap opera device designed to help at least one half of the couple out of a jam. Soaps.com takes a look at other such unions on The Bold and the Beautiful, Days of our Lives, General Hospital and The Young and the Restless that were disasters from the beginning and some that turned into love, for a little while at least.

Whip and Brooke
Whip Jones (Rick Hearst) seized upon the opportunity to help Brooke Logan (Katherine Kelly Lang) out when she became pregnant with her daughter Bridget Forrester’s (Jennifer Finnegan) husband Deacon Sharpe’s (Sean Kanan) baby. Not only did he offer to pose as the baby’s father, but Whip married Brooke as well. Despite Whip having genuine feelings for her, Brooke was still drawn to Deacon and their marriage of convenience blew up when the truth about the baby’s paternity came out.

Liam and Ivy
Though they were dating at the time, Liam Spencer (Scott Clifton) only agreed to marry Ivy Forrester (Ashleigh Brewer) so she wouldn’t be deported back to Australia. However, Ivy was later informed that she actually had dual citizenship so it didn’t matter if she was married to Liam or not. She eventually told Liam, who was still in love with Steffy Forrester (Jacqueline MacInnes Wood), and they got an annulment.

Austin and Sami
After Sami Brady (Alison Sweeney) drugged Austin Reed (Austin Peck) so she could have sex with him, she lied that he was the father of her baby Will. However, they were forced to marry in order to get Will back after he was kidnapped and sold on the French black market. A wedding ensued, as well as an accident and prolonged faked amnesia before Austin could get an annulment.

Stefano and Kate
Promising to keep her out of prison for poisoning Chloe Lane (Nadia Bjorlin) and setting up Daniel Jonas (Shawn Christian) for it, Stefano DiMera (Joseph Mascolo) blackmailed Kate Roberts (Lauren Koslow) into marrying him. They both held up their ends of the bargain, but instead of an annulment shortly thereafter, they fell in love and the two ruled over Salem as a united front. Until Kate believed Stefano was obsessed with Marlena Evans (Deidre Hall) again and she slept with Ian McAllister (Ian Buchanan).

Robert and Holly
Holly Sutton (Emma Samms) was involved with Luke Spencer (Anthony Geary), who was presumed dead after getting trapped in an avalanche. Soon after, Holly discovered she was pregnant and that she was going to be deported. So, Luke’s best friend Robert Scorpio (Tristan Rogers) stepped in and married her to help her with the baby and to keep her in the country. She sadly lost the baby, but the couple quickly fell in love and became a beloved soap couple.

Ned & Chloe and Jax & Alexis
Ned Ashton (Wally Kurth) and Alexis Davis (Nancy Lee Grahn) were in love, while their good friend Jasper Jax (Ingo Rademacher) was dating Chloe Morgan (Tava Smiley). To fulfill a stipulation in Chloe’s late uncle’s will, she needed to be married to keep the money he left her, which she used to start her design company. Since she and Jax had just started dating, Ned filled in as the groom to not complicate things. To complete the ruse, Alexis and Jax married as well. It worked and the real couples snuck around to see each other in private, but things started to unravel when Helena Cassadine (Constance Towers) ran Chloe down with her car thinking she was Alexis.

Danny and Traci
Traci Abbott (Beth Maitland) fell in love with and had an affair with professor Tim Sullivan (Scott Palmer). However, he was seeing other co-eds as well, which crushed her and led to a suicide attempt. When Traci discovered she was pregnant, her friend and rock star Danny Romalotti (Michael Damian) agreed to marry her so the baby would have a father. Though the marriage was for show, Traci fell in love with Danny. However, he had a girlfriend, Patty Williams (Lilibet Stern), who accidentally caused Traci to fall and miscarry. Patti left town and Danny and Traci got an annulment, but they remained friends.

Dylan and Chelsea
After Chelsea Lawson (Melissa Claire Egan) and Adam Newman (Michael Muhney) broke up, she discovered she was pregnant. Seeing him move on with Sharon Newman (Sharon Case) and fearing Adam would take the baby from her, Chelsea kept quiet. Instead, she named her former one-night-stand Dylan McAvoy (Steve Burton) as the father. Dylan became invested in the idea of being a father and started spending a lot of time with Chelsea. They eventually married and developed feelings for each other, until the truth about Adam being the father came out and blew everything up.

What other marriages of convenience do you remember? Share them with us below! 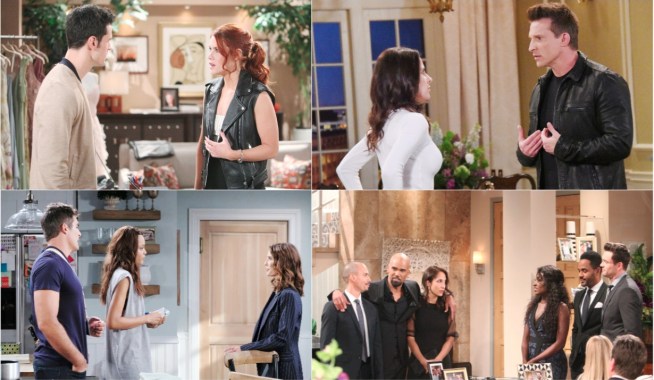