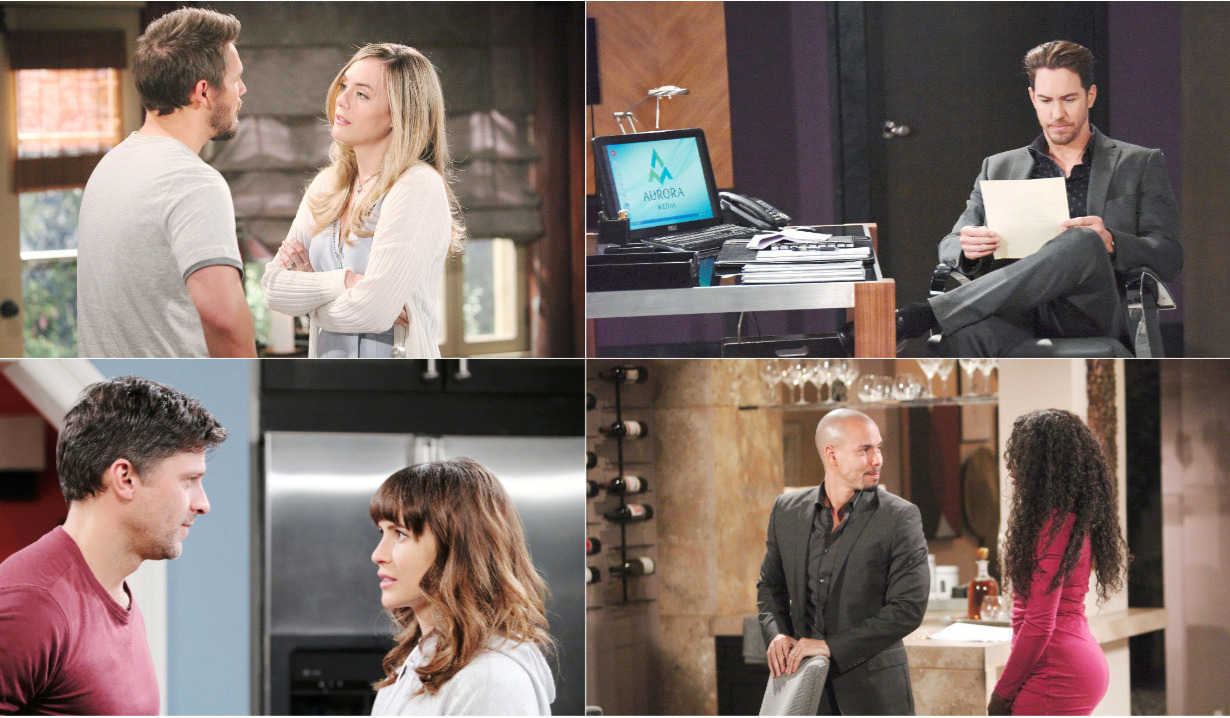 Get a glimpse into what’s to come as Soaps.com brings you spoilers for the week of April 22 – 26 for The Bold and the Beautiful, Days of our Lives, General Hospital, and The Young and the Restless, plus Days and GH spoilers from April 29 – May 3.

Thomas remains determined to seduce Hope away from Liam, but his scheme may not be working fast enough. Liam plans a romantic dinner for her, and they have sex for the first time since losing their baby. But will this help them heal or will Thomas pulling Amelia into his plot be enough to break them up? Meanwhile, Quinn spots Sally with Thomas and starts to doubt that the redhead should be with her son. Sally is shocked when Quinn sticks her nose into her living arrangements. Bill makes a bid to change his living arrangements when he asks Katie to become a family again. Katie rejects this and her sisters think she’s made a big mistake. Bill might make a big mistake of his own when he bumps into Shaun at Il Giardino. And Zoe makes some major mistakes after she learns the identity of Flo’s father. She goes after Flo, who is preparing to finally tell Hope the truth about her baby. Check out Soaps.com’s The Bold and the Beautiful spoilers to find out who disaster strikes.

Once again, Ciara is stuck in a dangerous situation. When she manages to get out of that, she finds herself in bed with Ben. And speaking of bedfellows… Gabi and Stefan step up their relationship. He does his best to keep this on the down low since he is still romancing Chloe in his spare time. Meanwhile, Hope is disturbed to learn that Lani slept over at Rafe’s, but not quite as disturbed as Eric is going to be. He finally tells Sarah how he really feels about her after she confronts him, only to have Nicole suddenly return to Salem. Across town, Will is losing his patience and lashing out at Marlena and Roman, but he’s not as upset as Maggie is. She and Kate immediately clash when Kate returns to work at Titan. Read the Days of our Lives spoilers to learn who kidnaps Holly.

Things continue to escalate in the battle over Dawn of Day. Shiloh keeps the upper-hand as Jason remains unsure about how to deal with the situation. Following their latest confrontation, Stone Cold turns to Sonny so they can once again argue about what to do. The mob boss is more concerned with keeping Carly distracted. Sam could likely use better tools for distraction since her ongoing attempt to ruin the cult from within keeps getting interrupted. And Alexis isn’t being as guarded or careful as she should be and there might be consequences for her carelessness. Neil is left to try and comfort the lawyer. Across Port Charles, things are getting a little less uncomfortable for Kevin thanks to an invitation he receives. They are a lot less comfortable for Mac, who finds something to be furious about. While Lulu has a surprise for Peter, Nina is shocked by what she learns, and Joss’ disappointment in Cameron leads to her lashing out at him. Of course, things are even lousier for Ava as her life keeps crumbling. Take a look at our General Hospital spoilers to see who manages to get some useful clues.

The week starts out on a positive note as Abby opens her new restaurant, Society, to much fanfare. Cane and Lily attend, and he uses the opportunity to try and heal their relationship. The crowded guests are treated to a duet by Ana and Jett. But not everything is humming along smoothly. Jack manages to uncover more lies and subterfuge at Jabot and receives a surprising visitor. And Victor makes a confession that could upset someone. But that’s nothing compared to the upset that comes when Devon discovers that Neil has died. This news spreads across Genoa City fast and family and friends soon gather to remember the man that they’ve lost. Visit The Young and the Restless spoilers to discover who returns to pay tribute to Neil.