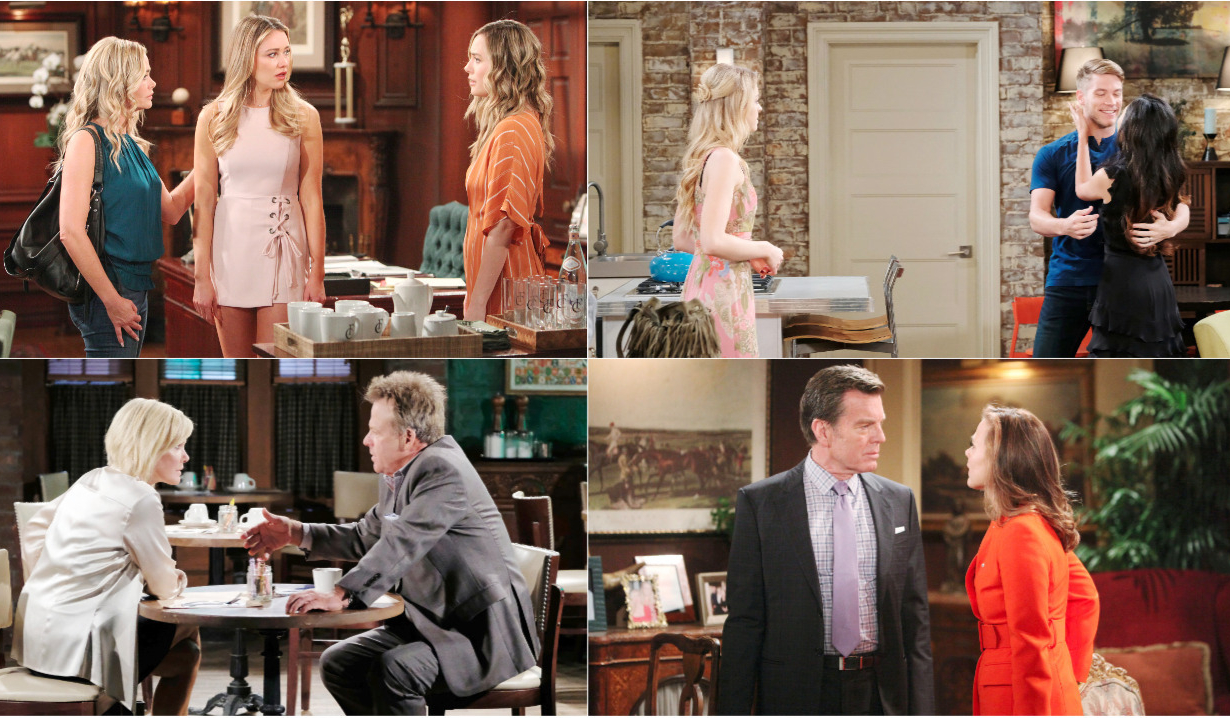 Take a look into the near-future as Soaps.com brings you spoilers for the week of April 15 – 19 for The Bold and the Beautiful, Days of our Lives, General Hospital, and The Young and the Restless, plus Days and GH spoilers from April 22 – 26.

Things will never be quite the same for Flo now that she knows Storm is her father. But this revelation is set to cause even more upheaval among the Logans, Spencers and Forresters. Hope and Liam don’t know how they are going to broach the topic with Steffy and the ramifications it might have. Added to that, Liam’s still not sure how to get Hope past her sadness but is sure that his love for her will be integral. Concerned in a very different way, Quinn is eager to know more about what happened between Bill and Shauna in Las Vegas. He soon realizes why Quinn is always so hard on the women Wyatt gets involved with. Meanwhile, Flo gets her mother to play along as Hope talks about Phoebe and Thomas thinks that Hope should visit Steffy in Paris. Check out Soaps.com’s The Bold and the Beautiful spoilers to find out what throws Ridge for a loop.

Jennifer sadly admits to JJ that it looks like any future for her and Jack in Salem is about to become impossible. Fearing for her own future with Tripp, Claire gets desperate and crashes his wedding to Haley. Fearing for the future of his sanity and financial well-being, Brady is furious when he discovers that Kate wants to work at Titan. Out for revenge for events in her past, Gabi continues to use her talents to seduce Stefan. Chloe is irate when she learns what dark schemes Brady has been involved with. But she has more to worry about when she and Ciara get nabbed by the cartel. This leaves Hope to team up with Ben to rescue them. Eric may need some rescuing of his own after what he says to Rex about Sarah. And Marlena and Sonny are anxious to get some information on what’s wrong with Will. It’s a lot more obvious what’s wrong with Rafe when he’s brought to the hospital after being shot. Read the Days of our Lives spoilers to learn who overhears Ted’s mysterious phone call.

The end of Dawn of Day seems to be approaching as Michael works hard at trying to bring all the clues together to come up with something useful. While Carly is crying, Sonny is arguing with Margaux about what to do about the latest rival to his power monopoly in Port Charles. If the dimpled don is having trouble getting through to the DA, Alexis won’t be pulling any punches after she learns that Julian gave Kristina the money she was looking for. Sam tries to keep things under control by using her talents to manipulate Shiloh. That isn’t working fast enough for Jason, who is disturbed to learn that Brad has already become loyal to the cult. Sonny urges Jason to act with caution, but Stone Cold may lose his cool during his latest confrontation with Shiloh. The road is still bumpy for Franco. He and Cameron continue to jar with one another, but is he going to get along with Jordan any better when he bumps into her? Across town, Laura tries to put her attention on what matters the most to her. What matters the most to Ava is getting rid of Ryan. She turns to Scott for some help, but things are not panning out well for her and Curtis isn’t helping matters. Take a look at our General Hospital spoilers to discover who gives Kevin a warm invitation.

The tension escalates at Jabot as Jack and Ashley fight for control of the company. Smiling Jack isn’t finding a lot of reasons to be happy and starts to lose it. Increasing the antagonism around the office, Billy and Phyllis’ feud is taken to another level. But Billy is soon distracted by other considerations. He catches Victoria off-guard when he surprises her with flowers and nostalgia before dropping on one knee and popping the question. Could the confession that she makes put the kibosh on his proposal? Across Genoa City, Nikki unearths a secret and doesn’t hesitate to tell it to Paul. Meanwhile, Arturo is eager to keep things underwraps and tries to strike a deal with Rey. All of this dodgy atmosphere is setting off some alarms for Paul. And Devon hopes that he is going to have some reasons to celebrate as he and Abby prepare for the opening of their restaurant. Lily is eager to attend the event after she’s released, but will she be regretting that as Abby’s forced to do damage control? Visit The Young and the Restless spoilers to discover who receives a disturbing message.