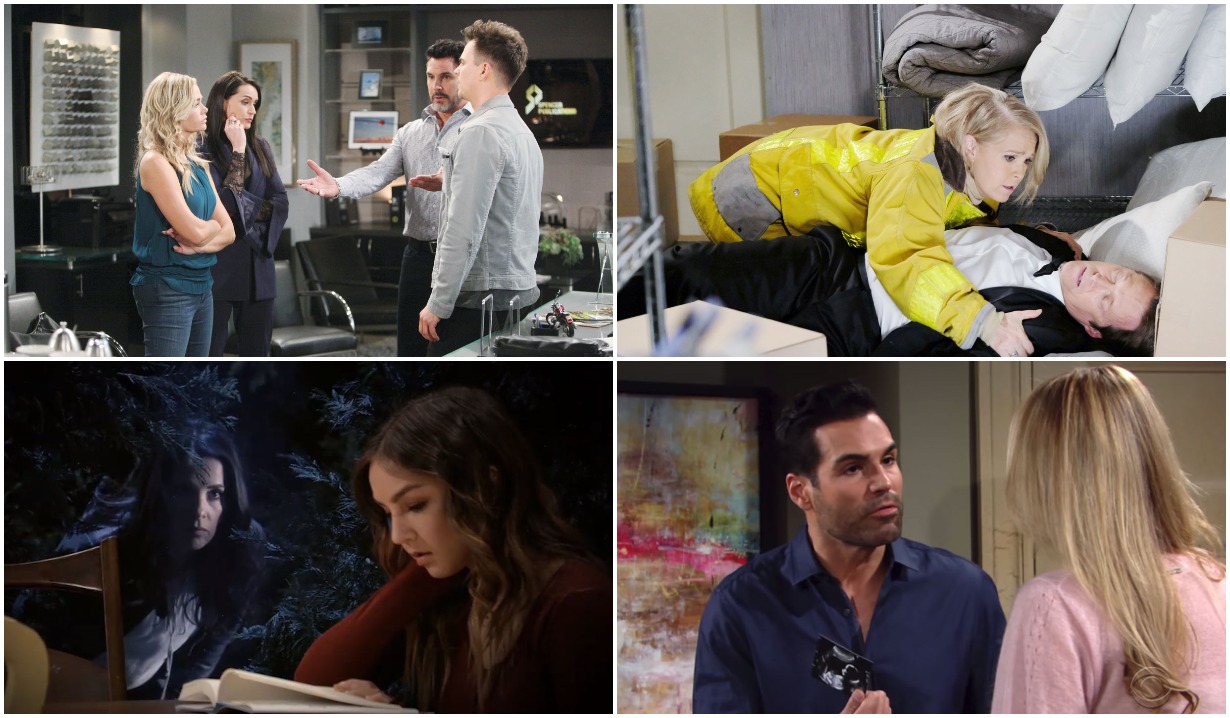 Before we start a new week of soap drama, Soaps.com takes you through the highlights from last week’s Bold and the Beautiful, Days of our Lives, General Hospital and Young and the Restless episodes from April 8 – 12, as well as teasers for what’s yet to come…

First on The Bold and the Beautiful, Shauna revealed that Florence could be Bill’s daughter, and Bill accused her of trying to shake him down. A DNA test revealed it was actually Storm Logan who was Florence’s father, relieving Wyatt, who feared his ex may have been his sister. Meanwhile, Florence’s guilt over the baby swap continued to eat at her and was made worse by the revelation that she and Hope were cousins. Coming up: Shauna learns Florence’s part in stealing Hope’s baby.

On Days of our Lives, Rafe and Hope’s marriage continued to crumble as she revealed Ted was in love with her, and Rafe moved out after Hope refused to help him raise Jordan’s son. Will was given the devastating news that he had an inoperable brain tumor, because all the other soaps are doing this storyline. And as Claire crashed Tripp and Haley’s wedding ceremony with the taped confession that the marriage was a fraud, Jack brought his own wedding to Eve to a halt when he couldn’t go through with it. Coming up: Rafe is shot!

Over on General Hospital, Kristina prepared to join the circle of trust at Dawn of Day and drank a drugged concoction as part of the ceremony. Jason broke in and kidnapped her from the house before the ceremony could go on, which involved her being tattooed and having sex with Shiloh. Oscar woke from his coma, but was told he had only days left to live due to the growing brain tumor. And the charges against Kevin for aiding and abetting his believed to be now twice dead, serial killer brother Ryan were dropped, just as a mysterious figure spied on Ava. Coming up: Shiloh confronts Jason.

And on The Young and the Restless, Mia’s fake pregnancy turned into a real one, and Sharon promised to stand by Rey no matter who was the father. Jack discovered Ashley bugged the house and stole his idea to transform Jabot into a full lifestyle brand by venturing into fashion and accessories. Phyllis orchestrated a trip with Summer so Lola and Kyle could have alone time and had a photographer snap photos of them in an intimate situation. She attempted to blackmail the Abbotts, promising another scandal would rock Jabot, but Jack called her bluff. Coming up: Billy proposes to Victoria.

Stassi Schroeder Admits She Can Only Wear Maternity Jeans 7 Wks. After Giving Birth: I Thought It’d Be ‘Easier’