Old Rivalries & A Stranglehold in Soaps Roundup: Week of March 25 – 29 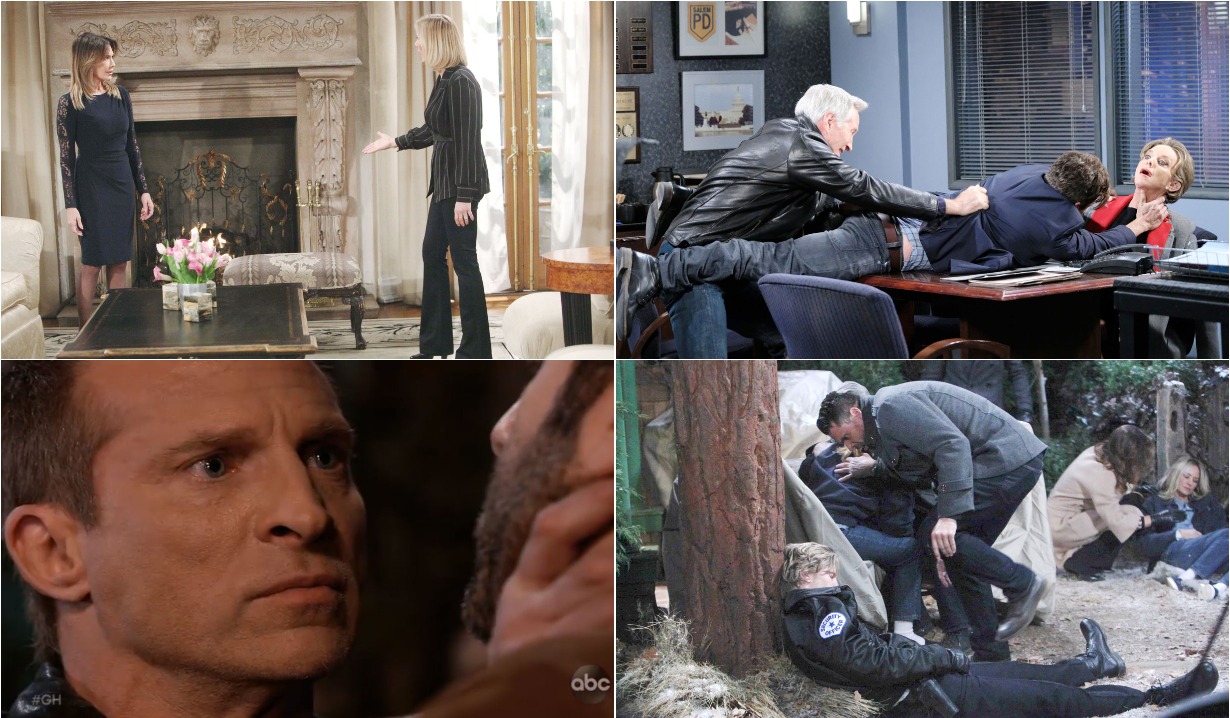 Business decisions, an unlikely kiss, violent attacks, and back in the slammer.

Soaps.com has the latest Bold and the Beautiful, Days of our Lives, General Hospital and Young and the Restless episode highlights from March 25 – 29, as well as spoilers for what’s to come…

First on The Bold and the Beautiful, the wheels in Taylor’s head spun when she learned little Douglas asked Hope to be his mommy. Ridge convinced Sally not to leave Forrester by offering to let her design under the Spectra name, a choice which disappointed Wyatt. And Quinn was thrilled to see Wyatt’s ex Flo was in town, and felt she was always the one for Wyatt, which Sally overheard. Coming up: Denise Richards joins the cast as Flo’s mother Shauna.

Over on Days of our Lives, Diana confessed to John that she poisoned Marlena, and then dropped the bomb that Leo wasn’t his son. A furious Leo put a curse on Will, who mysteriously passed out. Jordan revealed to Rafe that she had left her baby son behind in California and asked him to get the boy. And Claire lured Tripp into a trap at the Salem Inn, where Eve and Jack recorded him admitting he was only marrying Haley so she could remain in the country. Coming up: Eve drops a bomb at Jack’s rally.

And on General Hospital, Willow admitted to Chase that Shiloh was her baby’s father. Jason was arrested for attacking Shiloh, but Sam persuaded Shiloh to drop the charges. Facing his own set of criminal charges, Kevin urged Laura to divorce him so as to not bring scandal to her role as mayor. And Dante was haunted by dreams of completing a mission and realized he had been brainwashed. For the safety of his family he left town for a deprogramming clinic. Coming up: Gail’s will sends many residents on an adventure.

Finally, on The Young and the Restless, the women were rescued from the gas filled cabin and JT, who as it turned out, had gone off the deep end due to the cliché soap opera brain tumor. Kyle finally admitted to Lola that Summer was the donor, and he married her to save Lola’s life. And Jack and Phyllis learned Kerry had been playing them both and was working with Ashley, who returned to Genoa City and had stolen the patent for Jack’s fragrance, Jack of Hearts. Coming up: Jack takes over as CEO of Jabot.

This Month in Soap Opera History -...