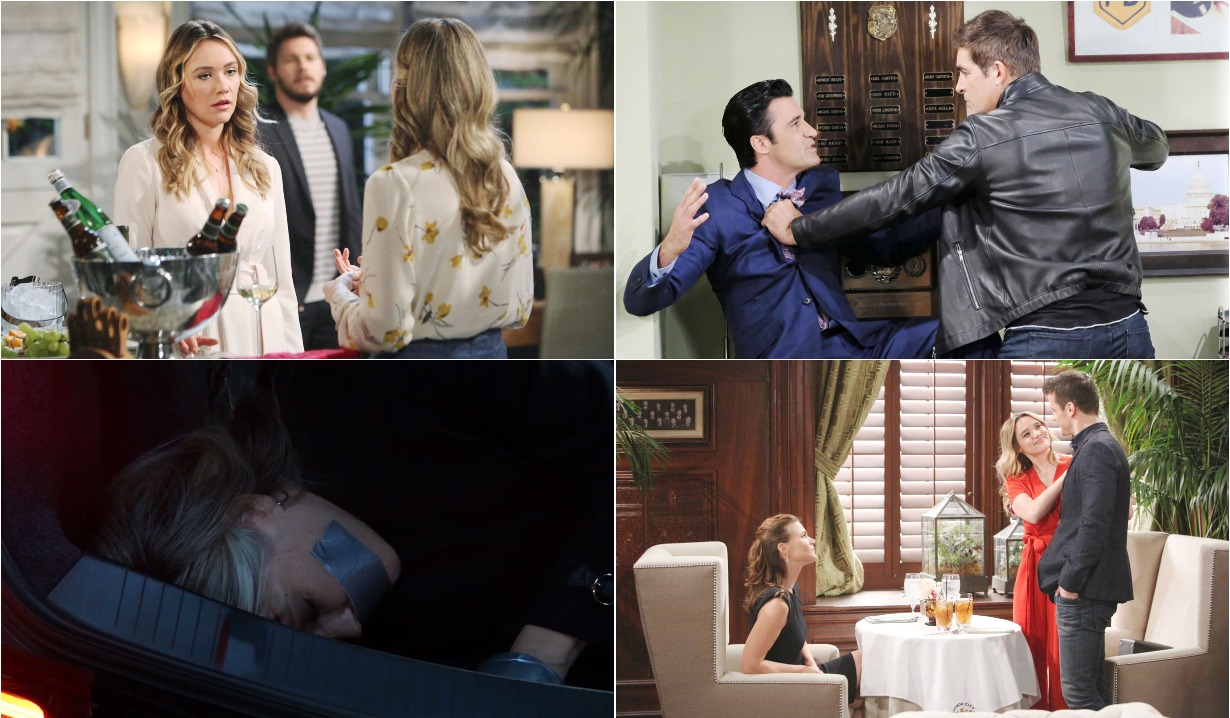 A warning, a betrayal, an attack, and a court tactic.

Soaps.com has episode highlights from last week’s Bold and the Beautiful, Days of our Lives, General Hospital and Young and the Restless from March 4 – 8, plus teasers for what’s to come…

First on The Bold and the Beautiful, Florence met Hope and almost confessed all, but was stopped by Zoe, who introduced Flo as Phoebe’s biological mother. Later, Flo ran into Wyatt, who naturally she dated in Vegas. Wyatt invited her to a dinner party he was having, which of course Liam and Hope attended, and Wyatt became the next victim of the lie that Flo was Phoebe’s birth mother. Coming up: Steffy plans to leave for Paris with the girls.

Over on Days of our Lives, John admitted to Marlena that he was Leo’s father, though neither trusted Diana and had a DNA test done. Meanwhile, Diana dreamed of Marlena’s death and reunion with John. Elsewhere, Tripp took pity on the illegal immigrant Haley and agreed to hide her out in his apartment, though his girlfriend Claire became jealous, and turned to Eve to help get rid of her because she had become a hot button issue in the race for Salem’s mayor. Coming up: John discovers Marlena unconscious.

And on General Hospital, Ryan knocked out Carly and threw her in the trunk of his car, and then took off with Ava to Niagara Falls to elope. When Ava discovered the unconscious Carly in his car, she thought “Kevin” was having a breakdown. Later they were confronted by Laura and Jason on a bridge to the border, and Ryan grabbed Ava and jumped over the bridge! And across the world in Turkey, Sonny and Robert tried to locate the missing Dante. Coming up: Ava wants revenge on Ryan.

Finally, on The Young and the Restless, Tessa was called to testify and made things worse for the women when she revealed she was blackmailing them, and they kidnapped her. Michael changed tactics and put Victoria and domestic violence on trial, and the case finally went to the jury. Meanwhile, Summer was found to be a match for Lola, who needed a liver transplant, and Kyle agreed to marry her in exchange for her donation. Coming up: The Newmans are shocked by the verdict.

Bold and the Beautiful, Young and...

Dear White People Creator Justin Simien on Why the Final Season Is a '90s Musical Event: 'I Just Really Wanted To'