An Annulment & Hair Pulling in Soaps Roundup: Week of February 11 – 15 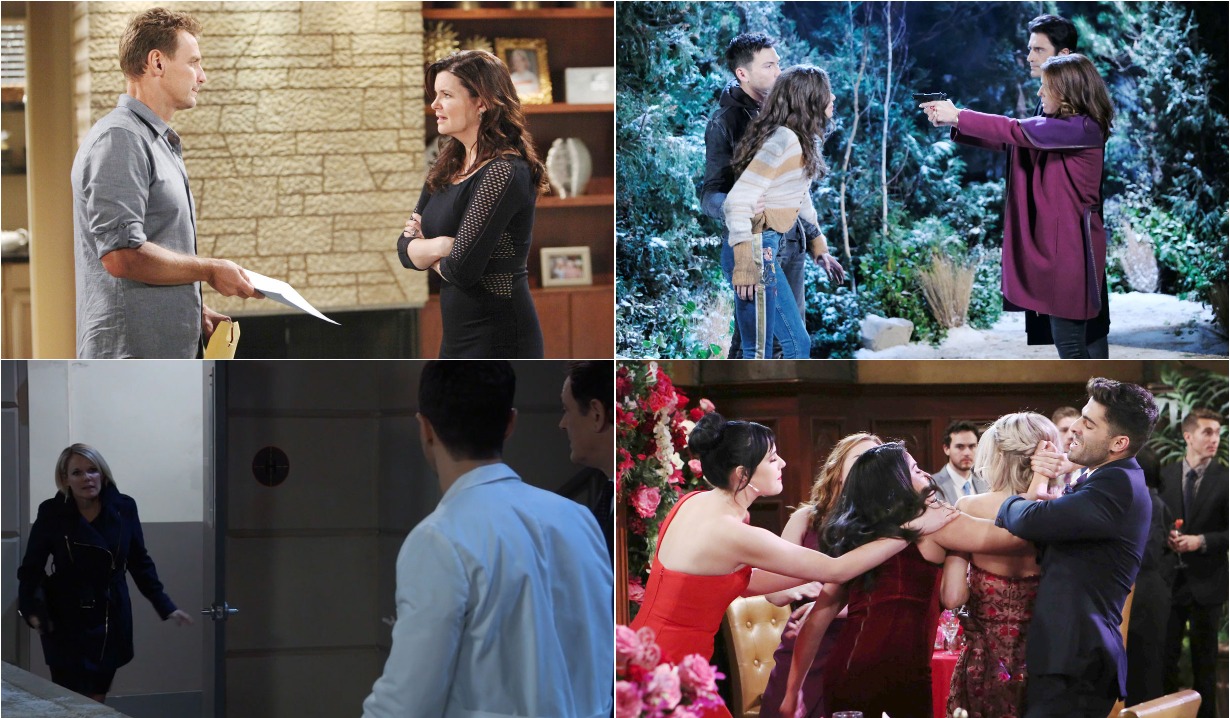 Soaps.com is back with storyline refreshers from February 11 – 15 for Bold and the Beautiful, Days of our Lives, General Hospital and Young and the Restless, including teasers for what’s ahead…

First on The Bold and the Beautiful, Florence admitted to Zoe that Reese sold Hope’s daughter Beth to an unknowing Steffy. Meanwhile, spending time with Phoebe seemed to be the only thing easing Hope’s loss of Beth. And out of nowhere, Thorne served Katie annulment papers for Valentine’s Day, believing they rushed into their marriage. Coming up: Zoe confronts Steffy about her baby.

Over on Days of our Lives, when Kate figured out Jordan was off her rocker, Jordan injected her with a drug, but failed to kill Kate. Ben rescued Ciara from the cabin, which Jordan set on fire, and Hope was stunned to learn it was Jordan who kidnapped Ciara and Charlotte. Reunited with Charlotte, Abigail finally forgave Chad. And John learned from Diana that the scheming Leo was his son, but we can’t help but think Diana is scamming him. Coming up: Chad and Abigail reunite and marry.

And on General Hospital, Maxie deduced that Valentin and Sasha were conning Nina into believing Sasha was her long-lost daughter and set out to do a DNA test. Carly shocked Sonny on Valentine’s Day with the news she was pregnant, and he worried about her history with risky pregnancies. Liz surprised Franco in jail with an impromptu wedding. Later Jordan proposed to Franco a way catch the real killer and clear his name. And Laura, realizing something was up with “Kevin,” trailed him. Coming up: Ryan takes Laura hostage.

Finally, on The Young and the Restless, Nikki was arrested after confessing to JT’s murder. Rey’s passionate Valentine’s Day with Mia went up in flames when she called him by his brother’s name. He went straight to Sharon and confessed his love for her, only to learn she was involved in JT’s murder and had to arrest her, along with Victoria and Phyllis. Mia had a meltdown and attacked Abby in an epic catfight complete with hair pulling. After Lola caught Summer kissing on Kyle, she dumped him yet again, only to have Abby convince her to give him another chance. Borrowing Abby’s jacket, she went to see Kyle, only to be attacked and shoved into the icy Abbott swimming pool. Coming up: Phyllis makes a deal with Christine.

Another All My Children & One Life...