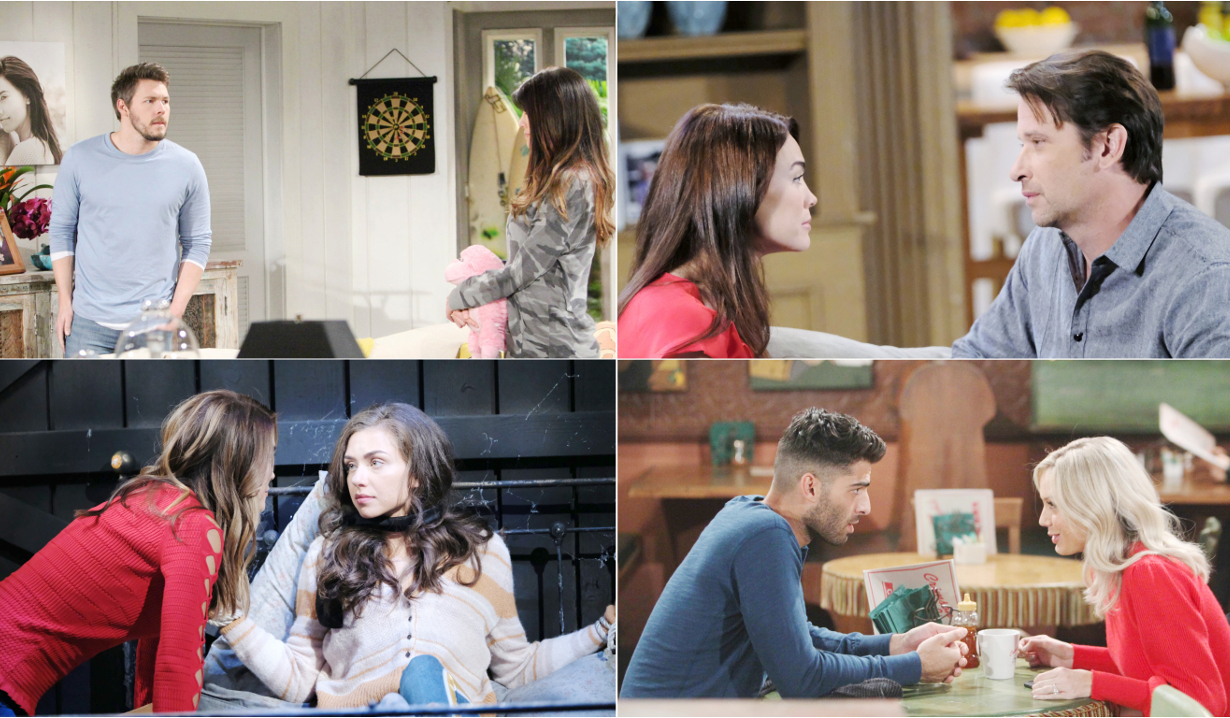 Start your week off right with Soaps.com’s preview of what’s coming up with spoilers for the week of February 11 – 15 for The Bold and the Beautiful, Days of our Lives, General Hospital, and The Young and the Restless, plus Days and GH spoilers from February 18 – 22.

Zoe tries a different strategy when dealing with Florence. After extending her some sympathy, she demands to know what has really been happening. Getting answers isn’t easy and she resorts to threatening to expose Flo, who finally caves and tells her everything. Shocked, Zoe decides it’s time to confront Reese about his dodgy decisions. Meanwhile, Steffy is compassionate but is starting to get really uncomfortable about the way Hope is acting around Phoebe. She talks to Liam about it and he defends his wife’s grieving process. Meanwhile, Katie gets something she wasn’t expecting for Valentine’s Day when Thorne tells her what he thinks of her marriage. She immediately hurries off to tell Wyatt all about it. Check out Soaps.com’s The Bold and the Beautiful spoilers to find out what Bill has planned.

Being either genuinely concerned or very sneaky, Jordan tries to coax her brother Ben to check himself back into the mental hospital. But Ben isn’t the only person she needs to get out of the picture. When Kate gets close enough to the truth that she could be dangerous, Jordan decides to shut her mouth so she won’t be able to make a peep. Pretty soon, Rafe is trying to hold back his tears at Kate’s bedside. This sudden burst of violence tips Ben off that he could be in trouble and he tries to convince Chad to help him so that he can get Ciara and Charlotte out of danger. It may be too late. That’s also how Brady may be feeling when he learns that Chloe is packing up the kids to move in with Salem’s least successful lothario, Stefan. Meanwhile, John questions Diana about whether their sexual liaison produced Leo, who is busy trying to get Sonny to have a sexual liaison with him. Unfortunately for him, Gabi manages to ruin his randy plans, and Sonny escapes to spend Valentine’s Day with Will. Read the Days of our Lives spoilers to see who gives Hope a Valentine’s treat.

Having a fairly unpleasant week, Carly manages to find an excuse to lecture Sam about her recent actions. She has to save some energy for another conversation with Sonny about what the future might hold for them. Kristina isn’t feeling like her future is that bright after all. Having Sam move in on her territory at Dawn of Day has Kristina feeling jealous, especially when the PI spends Valentine’s hanging around. With Sam busy, Jason uses Spinelli’s help to chase after some leads while Drew has another meeting with Shiloh. Meanwhile, Franco’s life continues to get unglued as Ryan tries to stitch him up. Laura pays him a visit to try and get to the bottom of it. What he has to say has her pricking up her ears. But it’s not really what Jordan wants to hear and she keeps demanding the answers she’s looking for. Meanwhile, something awkward happens when Peter and Maxie have a run-in with Nina. The awkwardness dissipates slightly as Finn and Robert are prompted to work together more. And Michael’s week gets uncomfortable when he hears from Nelle. Take a look at our General Hospital spoilers to discover who gets into trouble.

To promote their engagement and convince everyone that they are a happy couple, Abby and Arturo appear on the cover of Life & Style. Not everyone is so capable of appearing blissful. Kyle finds himself the target of Summer’s charms once again and she moves in with him. Jack tries sticking up for his son and his questionable choices. Meanwhile, Nikki finally chooses to confess what she did and face the consequences. Those will be slight if Victor has anything to do with it. Across Genoa City, Sharon shares some intense moments with Rey and her life could change when something shocking comes her way. While Sharon is falling apart, Nick is playing with Phyllis. Visit The Young and the Restless spoilers to learn who else has a hard time keeping things together.

A Gunshot Wound & Major Setup in...