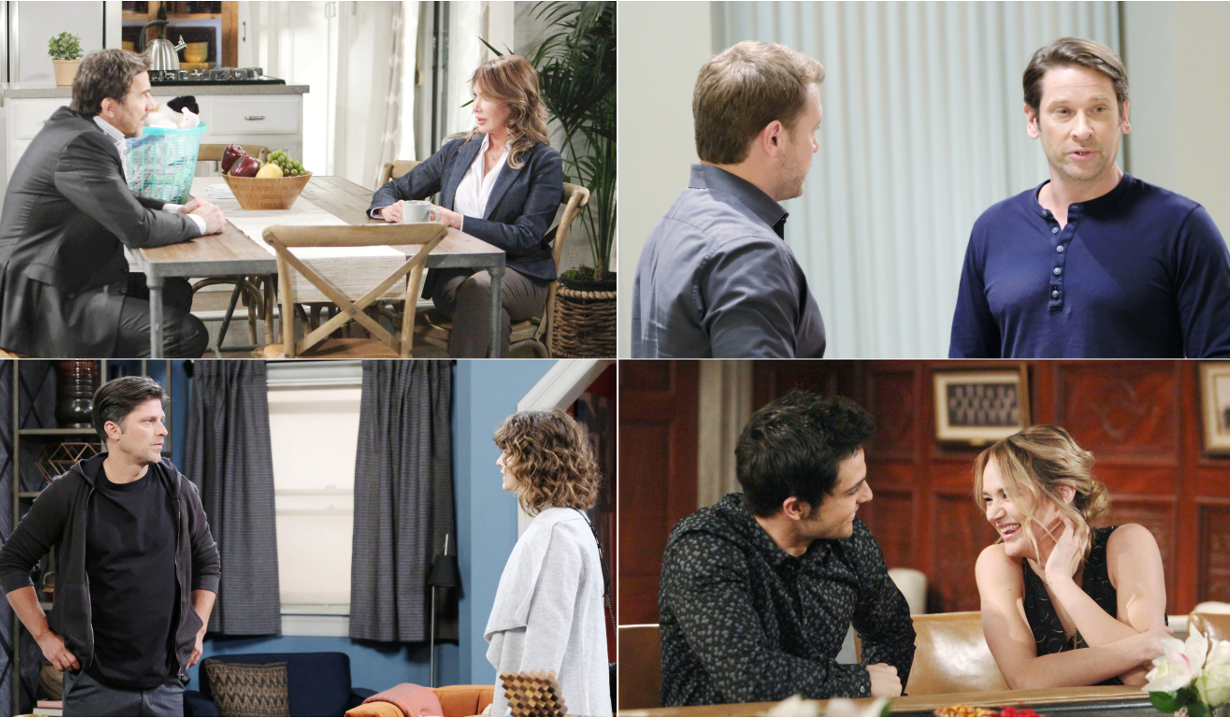 Soaps.com brings you a fresh preview of what’s coming up with spoilers for the week of February 4 – 8 for The Bold and the Beautiful, Days of our Lives, General Hospital, and The Young and the Restless, plus Days and GH spoilers from February 11 – 15.

Hope has been feeling overwhelmed by grief lately, but she is about to be a lot more emotionally confused. Once she holds the baby Steffy has adopted in her arms, Hope is shocked by what she feels. Filling her life with more emotional chaos, Liam breaks down and tells her how guilty he feels about them losing their child. Meanwhile, Wyatt and Sally are both perplexed when they notice how much Kelly looks like Phoebe. Across town, Zoe is confused and annoyed when she discovers what Reese has been planning for their future. She wants some answers about his baffling behavior. When she goes looking for them at his apartment, she gets more than she bargained for from Flo. Check out Soaps.com’s The Bold and the Beautiful spoilers to find out who Ridge and Brooke question about the adoption process.

Meeting Leo’s mom in Salem throws John for a loop. He manages to remember that at least one of his former identities knew her and in more ways than one. He confesses his fears to Roman that Leo could be his son. And speaking of awkward situations… Chloe and Stefan find themselves in danger when her past comes back in a bad way. Trying to do the right thing for once, Stefan attempts to save her life, even if that might mean losing his own. But if he survives that, it might not be for long. After tearing into Ben over Charlotte’s kidnapping, Chad goes after Stefan. And, despite their recent screw-ups, Rex and Sarah decide to give things another shot and try to revive their relationship. But this could be compromised as she attempts to make amends with Eric. Read the Days of our Lives spoilers to see who shares a kiss.

Feeling more lost than usual, Franco is desperate to get some good advice from ‘Kevin’ but what he winds up getting will be a lot different. Though Franco manages to continue bonding with Aiden, he also manages to become a pawn in Ryan’s latest scheme. As Franco heads into danger, Liz is left leaning on Scott for some support. While Ava finds something to be shocked about in Port Charles, Sam is doing her best to encourage Shiloh into letting her into his sphere. But how long will she be left to do this after Spinelli tells Jason what he’s learned? And Sasha comes back to town to surprise Nina and the pair of does some bonding with Charlotte. But something happens that causes Nina to make a prompt attitude adjustment. Meanwhile, Sonny tells Alexis how worried he is about something. Take a look at our General Hospital spoilers to discover what throws Alexis off guard.

Devon continues to recover from his grief as he fights to support Ana’s career. Kyle has a harder time fighting back as Summer manipulates him and anyone else she can corner. Nick gets sick of people attacking the Newmans. He steps up for the family but Sharon is having a more difficult time giving the support she’s expected to give. She’s forced to pick sides and winds up giving Nick some comforting. Someone else may be in need of comforting if Abby has anything to do with it. She tries to control her situation, even if that means acting nice to Mia. And after making a discovery that nearly curls his mustache, Victor works with Nikki to figure out what they should do next. Visit The Young and the Restless spoilers to learn who makes a decision that could change the lives of several people.