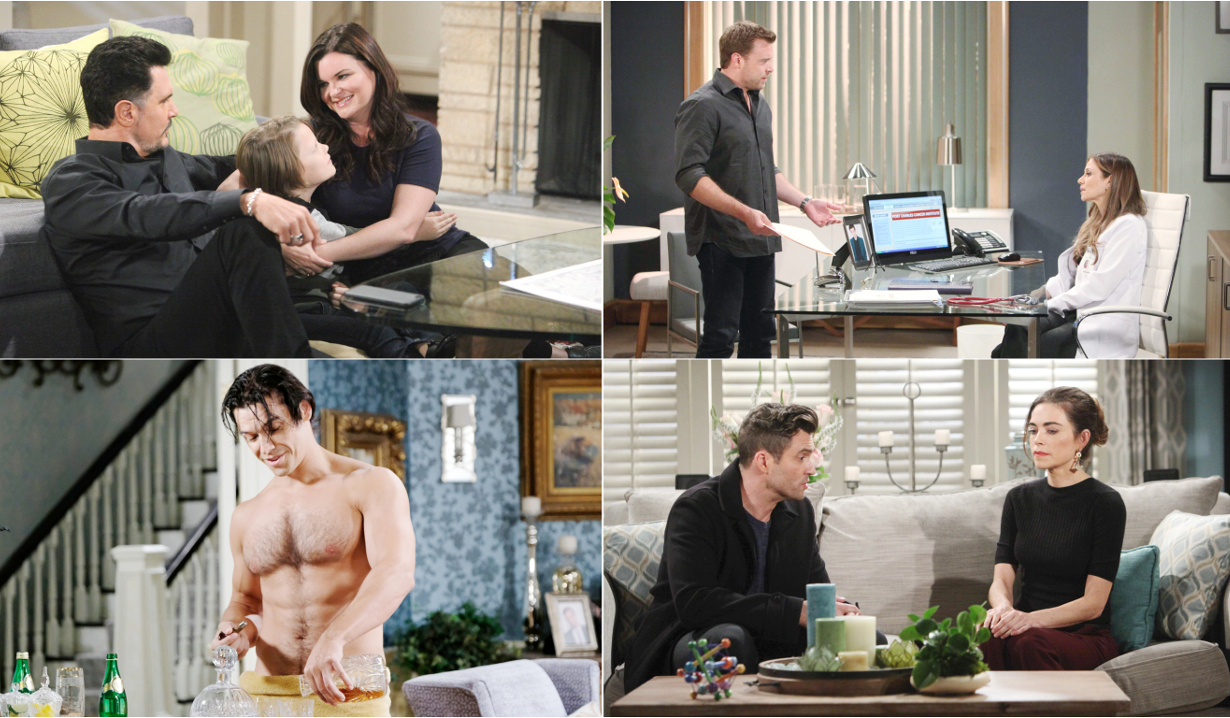 Get a look at what’s coming up as Soaps.com brings you spoilers for the week of January 21 – 25 for The Bold and the Beautiful, Days of our Lives, General Hospital, and The Young and the Restless, plus Days and GH spoilers from January 28 – February 1.

Thorne continues to reassess his life. Watching Katie and Bill spending time together reminds him of the connection he had with Darla. As Thorne grimly ponders what his future may hold, Hope and Liam continue trying to cope with the future they lost when their baby died. With less than stellar timing, Steffy starts to consider adoption. Wyatt has serious doubts that this is a good idea. While he gives Liam a warning, Steffy is busy making life altering choices after finding a baby she feels a connection with. And Florence can’t help noticing that Reese is trying to use her and confronts him about it. Check out Soaps.com’s The Bold and the Beautiful spoilers to find out who is in danger.

Things are getting complicated over at the Kiriakis compound as Victor strikes a deal with Brady, not that it looks like Brady has much choice in the matter. Meanwhile, Xander may be having second thoughts about his deal with Leo as he tries to manipulate the situation. Across Salem, Jennifer’s situation continues to crumble as Kayla gives her some bad news about Jack. Eve keeps up her manipulations as she tries pushing Jack into a rather daring career choice, but at least he manages to spend some time bonding with JJ. After warning his father about Eve’s more unattractive attributes, JJ learns something important about Haley. And Gabi prepares to fight for what she can get as she and Stefan ratchet up their war. Will Kate be able to help her, or will she be too distracted by Ted trying to get back into her good books? Read the Days of our Lives spoilers to see who forms a surprising partnership.

Lucy catches Ava in her crosshairs. While Coe is cornering Jerome to give her a piece of her mind, Ryan is feeling elated. This may let him drop his guard too much, but will Ava be able to safeguard him? Meanwhile, Kim tells Liz about all the things she is struggling with in her life. Could the nurse be the reason that Kim calls Drew, or does she have other bad news? While Laura winds up being the unlikely person to offer some comfort to Charlotte, Sam catches up with her mom about the new developments in her life and her ongoing suspicions regarding Shiloh. And as Peter gets called down to the station to face Jordan, Sonny eagerly waits for some news, and Carly has something to be heartbroken about. Take a look at our General Hospital spoilers to discover who risks their life.

Still panicking about the crime hanging over their heads, Phyllis thinks that she may have cracked a plan to keep them safe and tells Sharon about it. Unfortunately for them, Nick already knows more than he should and Nikki is starting to lose her cool. Turning into Genoa City’s new hot head, Cane shows up at the Abbott house and clobbers Billy. Once Cane defends his actions to the increasingly concerned Devon and Neil, he manages to find himself bonding some more with Victoria. As Billy hurries off to get some comfort from Phyllis, Rey and Arturo begin forming a brotherly bond after the cop publicly renews his commitment to mischievous Mia. And Arturo tries to throw all of his commitment at Abby. Visit The Young and the Restless spoilers to learn who demands the truth after catching someone in a lie.