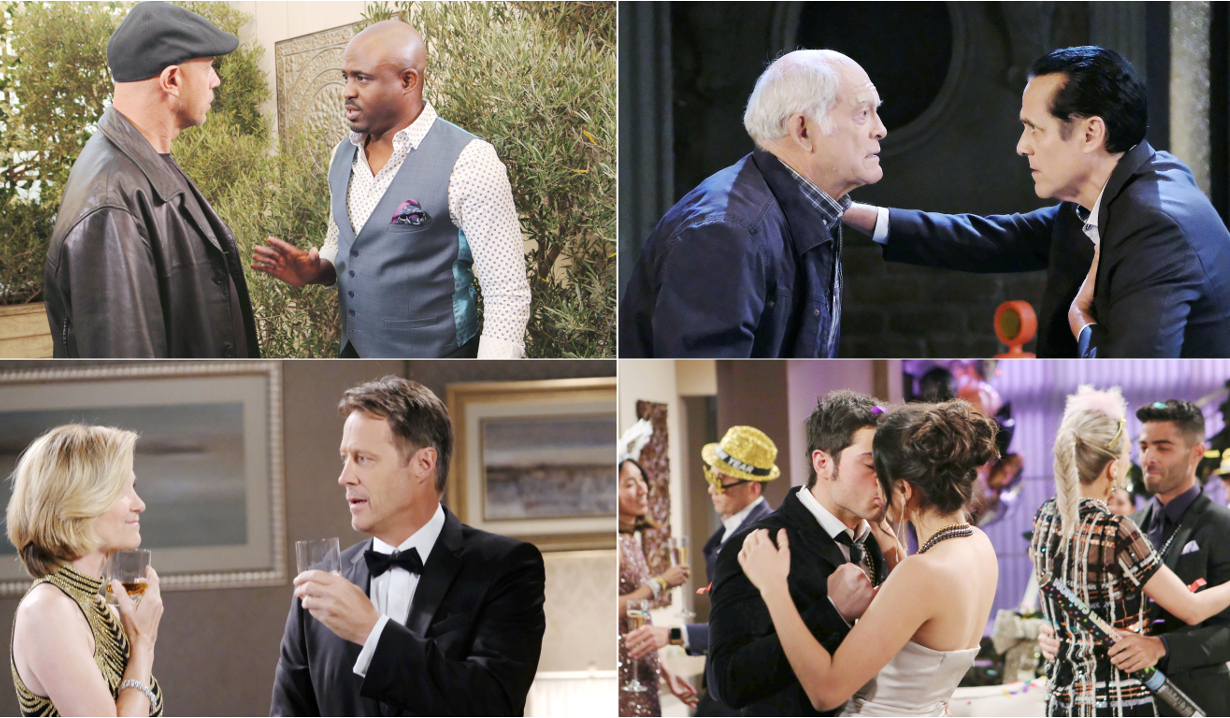 Get a snapshot of what will happen at the turn of 2019 as Soaps.com brings you spoilers for the week of December 31 – January 4 for The Bold and the Beautiful, Days of our Lives, General Hospital, and The Young and the Restless, plus Days and GH spoilers from January 7 – 11.

As Hope’s labor progresses, Liam remains trapped at the airport on the mainland. He bumps into Kieran and Matt, who argue about his options, but Liam finally turns to his father for help. As soon as Bill gets the call, he arranges for the Spencer helicopter to fly Liam through the storm to Catalina Island in time for the baby’s birth. Back in LA, Reece’s worries about Zoe could be the undoing of both of them. When a threat is received, how he reacts may put her in more danger. Check out Soaps.com’s The Bold and the Beautiful spoilers to find out what major event will tear through the Logan, Forrester, Spencer, Avant, and Spectra families when the show airs its 8000th episode.

Eve returns to Salem just in time to make sure the year ends with a bang. As she drops by Doug’s for the New Year’s Eve party to tear into everyone she believes has wronged her, things take a rather shocking turn when Jack returns to the land of the living. While Jennifer tries to swallow this life altering event, JJ lashes out at Eve. In addition to this, Abigail must deal with the ongoing mess that Gabi has made of her life and how her enemy should be punished. As Chad is getting advice from Julie about how to make amends with Abby, Rafe and Hope debate what to do about his wayward sister. He winds up arresting Stefan for espionage. Read the Days of our Lives spoilers to see what Hope uses to ruin Ciara’s date with Ben.

As the New Year arrives, Lulu makes her presence in Port Charles felt. First, she pays Ava a visit that she’s not likely to forget, and then she holds a special event at Charlie’s. Laura is moved, but somewhat confused, by how much support ‘Kevin’ seems to be throwing her way in the middle of their divorce. As Sam gets more disturbed by the person using her old alias, Sonny works hard to keep Mike calm. Across town, Drew urges Kim to spend more time with Julian, but what does he tell Curtis about his situation? Curtis may not have time to think about that since Jordan needs him to do more stuff for her. Take a look at our General Hospital spoilers to discover who decides to make a change.

The party that Devon throws for New Year’s Eve erupts with drama. Lola manages to do something that leaves Kyle shocked, but not shocked enough that he doesn’t want to try again with her. Victor isn’t shocked to learn that Christine is gunning for him. He has plans and Nick is part of them. Meanwhile, Reed confesses to what he did, and Nikki tries to take control of her situation. Jill returns to Genoa City just as things are getting ugly between Victoria and Cane. As they try to figure out how to move on, he opens up to Jill about his life while Victoria deals with her mixed feeling about Billy. Visit The Young and the Restless spoilers to learn who faces a test.

‘Succession’s Jesse Armstrong On The Dangers Of Creating Unsavoury Characters: “You Have To Be Careful” – LFF