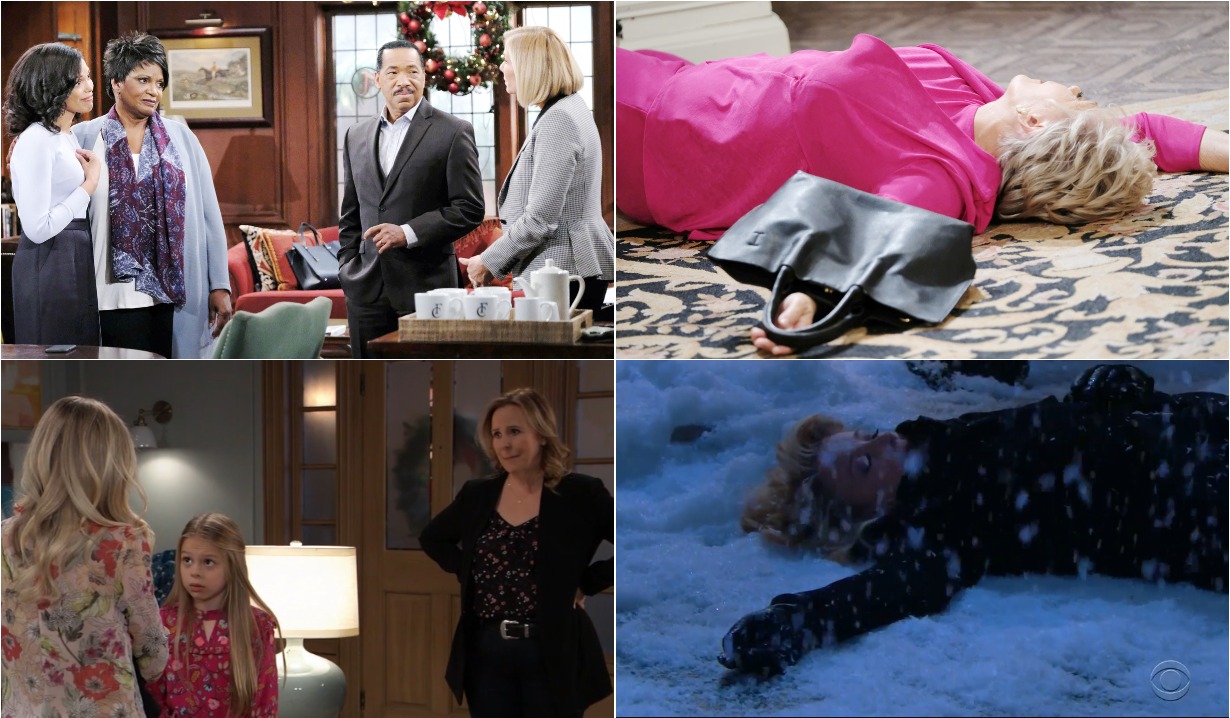 Get caught up with Soaps.com’s episode highlights from last week’s Bold and the Beautiful, Days of our Lives, General Hospital and Young and the Restless from the week of December 17 – 21, and get a teaser for each for what’s to come.

First on The Bold and the Beautiful, Hope refused to allow her daughter to grow up with her sister Kelly if Taylor remained part of the picture, which probably means trouble for her marriage to Liam. Taylor and Brooke had another clash during which Taylor’s new hero Reese intervened to defend Taylor. The possible gold-digger continued to court Taylor and they shared another kiss. And Maya returned home from Paris and stunned everyone with the news that she and Rick were divorcing. Coming up: Reese avoids a mysterious stranger.

Next on Days of our Lives, Julie discovered Gabi switched the paternity test results and that Chad was the father of Abigail’s baby, but naturally she tumbled down the steps after a fight with Gabi and of course landed in a coma. Abby served Stefan with an early Christmas present, divorce papers. Sonny insisted to Will they couldn’t be together because of Leo’s blackmail. And JJ met a nurse named Haley at the hospital and prevented her from taking her own life. Coming up: Chad learns he is Charlotte’s father.

Over on General Hospital, Mike’s Alzheimer’s worsened and he and the patient he is sweet on ran away from the day care facility, but were safely recovered. Nina and Valentin reunited, but Dr. Obrecht knew Valentin had paid Sasha to pretend to be Nina’s long lost daughter in order to win Nina back. Willow was revealed to be the mother of baby Wiley, though she doesn’t know her son died and Brad and Lucas are actually raising Michael and Nelle’s son, who was swapped by Brad and Nelle for the dead child. Coming up: Dr. Obrecht visits Nelle in prison.

Finally on The Young and the Restless, Nikki got sloshed at the Jabot Christmas party, wandered out into a blizzard, and was mowed down by Reed, who was driving Charlie to a party because Charlie was drinking too. Tis the season! Reed didn’t see what he hit due to the storm, but later when it was revealed Nikki was in a coma after a hit-and-run, he realized he and not Santa and his reindeer ran over grandma. In happier news, Devon signed Fen to a recording contract, but didn’t allow Ana to serve as a producer, and Jack and Kerry made love. Coming up: A comatose Nikki dreams of Victor.