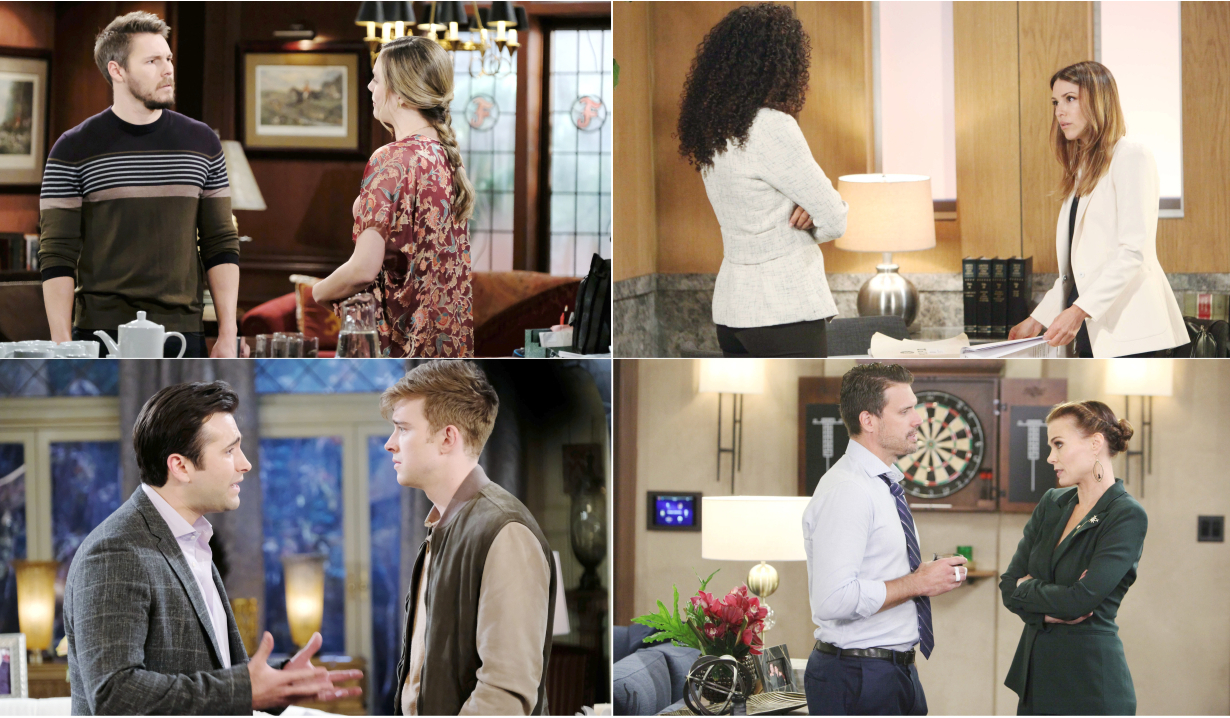 Run down, runaround, and raving.

Get a look at what’s coming up as Soaps.com brings you spoilers for the week of December 17 – 21 for The Bold and the Beautiful, Days of our Lives, General Hospital, and The Young and the Restless, plus Days and GH spoilers from December 24 – 28.

Maya returns from Paris and the news isn’t good. Things aren’t looking great for anyone else either, aside from Wyatt and Sally who bond during yoga. All the twisting is enough to get them to admit they love each other. But it’s not love that’s twisting around Liam as he attempts to referee the never-ending feud between Hope and Steffy. Hope starts to wonder if he’d rather be with Steffy and Kelly, especially while Taylor is around. When he tries to defend Taylor by pointing out Brooke’s many flaws, Hope is horrified. Meanwhile, Taylor battles it out with Brooke about what she and Hope are trying to do. Hope throws everyone for a loop when she announces what her holiday plans are. And Reese throws his support behind Taylor while trying to coax and apology out of Brooke. Check out Soaps.com’s The Bold and the Beautiful spoilers to find out what Bill admits.

When Julie discovers Gabi’s secret, it places her in immediate danger. Chad and Sonny have to work hard to try and save her life. When she winds up in the hospital, Doug, her family and friends rally around to offer their support. But Gabi prepares to administer a final blow to keep Julie’s mouth shut forever. Across Salem, Stefan may be getting the Christmas gift he doesn’t want as Abigail plots to cut him out of her life. Will also has a reason to be glum for the holidays when Sonny tells him they can’t see each other anymore. And things get ugly when Sarah attempts to talk Chloe into letting Eric raise Holly. Read the Days of our Lives spoilers to see who tries to make peace between Stefan and Ted.

Margaux has a reason to smile again now that she has another lead in her case. Making things even better for her, things continue to go downhill for Carly and Sonny. She keeps worrying about what is happening behind her back and once again complains to Jason about it before fighting with her husband. As usual, Jason does his best to keep her calm. But Stone Cold is having a hard time keeping his cool now that Sam is getting more disturbing messages. Across Port Charles, Liz finds something to be enraged about as her son suffers another disappointment. And Lulu does her best to get some dirt out of Chase, but the detective is more distracted by how he can get closer to Willow. Just in time for the holidays, Maxie gives Anna something to be happy about and Nina gets a shock. Take a look at our General Hospital spoilers to discover who is trying to help other people despite their own problems.

Nikki’s drinking leads to danger as she stumbles into the path of an oncoming car. It’s Charlie’s car and Reed is behind the driving wheel. They instantly try to cover up what they’ve done. Nikki’s family assembles to try and support her but her life hangs in limbo while Victor is nowhere to be found. Following all the unpleasant news, Nick vows to protect his family and Phyllis starts to fear she may be in danger. Billy does his best to comfort Victoria during her hard time and Sharon reaches out to Mariah before finding some comfort with Rey. Across Genoa City, Kyle turns the tables on Lola as he cooks for her and Kerry digs into Jack’s past while Ana pushes Devon out of his comfort zone. Visit The Young and the Restless spoilers to learn who Abby gets to open up.