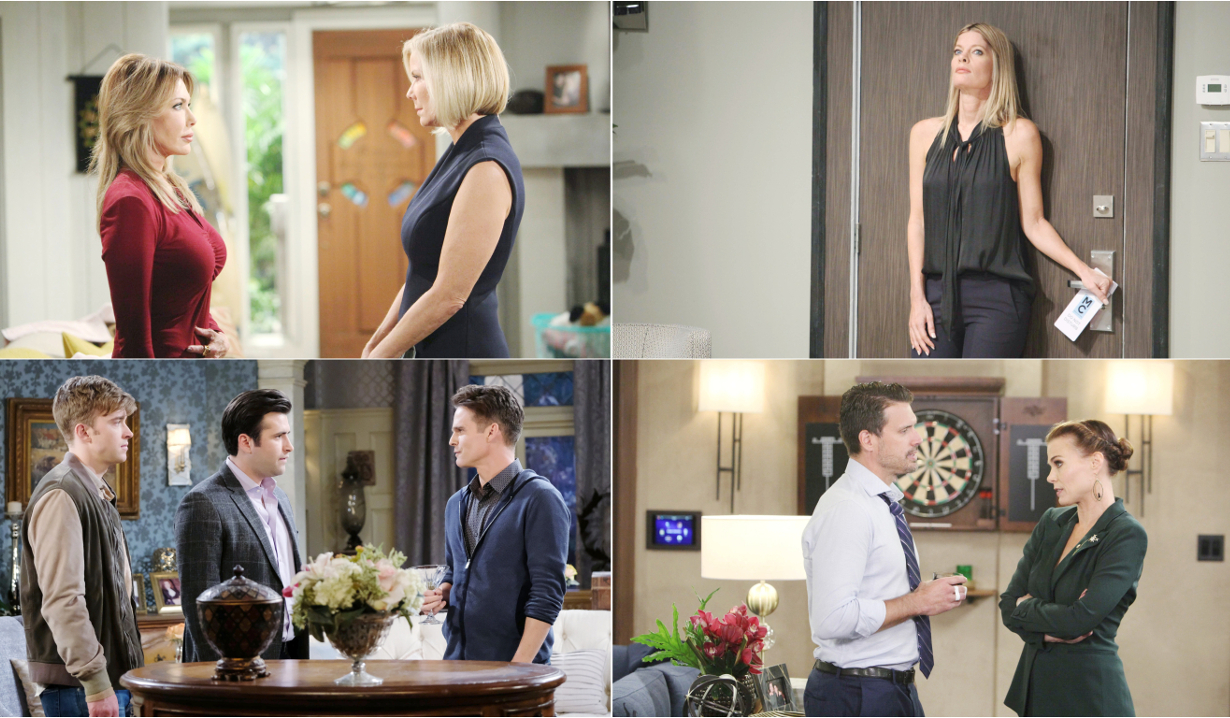 Take a sneak peek into the future as Soaps.com brings you spoilers for the week of December 10 – 14 for The Bold and the Beautiful, Days of our Lives, General Hospital, and The Young and the Restless, plus Days and GH spoilers from December 17 – 21.

Taylor’s ongoing presence ruffles feathers. Liam and Hope discuss how unstable Taylor is and then he argues with Steffy about the same thing. He’s worried what will happen if they leave her alone with Kelly. Steffy starts to think that everyone is out to get her mother. This will likely only get worse when Brooke catches Taylor alone with the child. Brooke also manages to argue with Hope about Taylor. Amid all this turmoil, Taylor tells Ridge what’s scaring her and sadly reminisces with Steffy about Phoebe. Taylor does get some support from Reece, however, who also plants a kiss on her. But will this development sit well with Zoe and Xander? Check out Soaps.com’s The Bold and the Beautiful spoilers to find out who is growing closer.

The battle between Gabi and Abby accelerates and they are not playing nice. Abby manages to get Julie to help in her bid to take Gabi down. Once Lucas says his goodbyes to his friends and loved ones in Salem, Chloe winds up in shock after she opens the letter that Justin delivers. The letter is from Nicole and it seems to be upsetting everyone. Eric is outraged and confronts Brady while Maggie and Sarah are busy arguing about who has a future looking after Holly. Across town, Will and Sonny make another effort to knock Leo out of their lives but that is likely doomed to fail before the wedding can commence. And Ted may have to face the rage of Rafe after he tells him that he’s been having an affair with Hope. Read the Days of our Lives spoilers to see what Kayla tells Tripp.

Ava continues to unravel in the wake of Kiki’s demise. She’s rather startled by who shows up to see her. There are some other unexpected visits going on in Port Charles. Cameron drops in to see Julian, who is already having a busy week trying to work things out with Kim. Maybe she’ll have time to work on their relationship since she’s agreed to let Oscar have some space. Across town, Laura tells Sonny all about her husband asking for a lot more than space. He’s soon distracted when he runs into Oscar and Laura runs off to fill Lulu in on her unsettled life. Carly is also unsettled enough to tear into Ryan, still thinking he’s Kevin. But things could be looking up for Valentin. Following a disappointment for Nina, she’s given a nudge to allow the Cassadine another shot. But what will she choose to do? Take a look at our General Hospital spoilers to discover who else is thinking about the future.

Fen’s life goes from bad to worse as Lauren gets fed up with his shenanigans and cuts off his cash. This leaves him forced to find a job. That could be good news for Lola. Meanwhile, Abby is taking some risky moves as Mia continues to make waves. Across Genoa City, Cane gets busy doing all he can to make amends with Devon and teams up with Victoria. Things are strained for Phyllis as she’s forced to hide something from Nick and has to define what her relationship with Billy is. Mac returns to town amidst the mess around JT. Mariah is prompted to make a hard decision after she has a confrontation with Sharon that forces the blonde to make a confession. And Nikki winds up facing another threat. Visit The Young and the Restless spoilers to learn who makes a daring move.