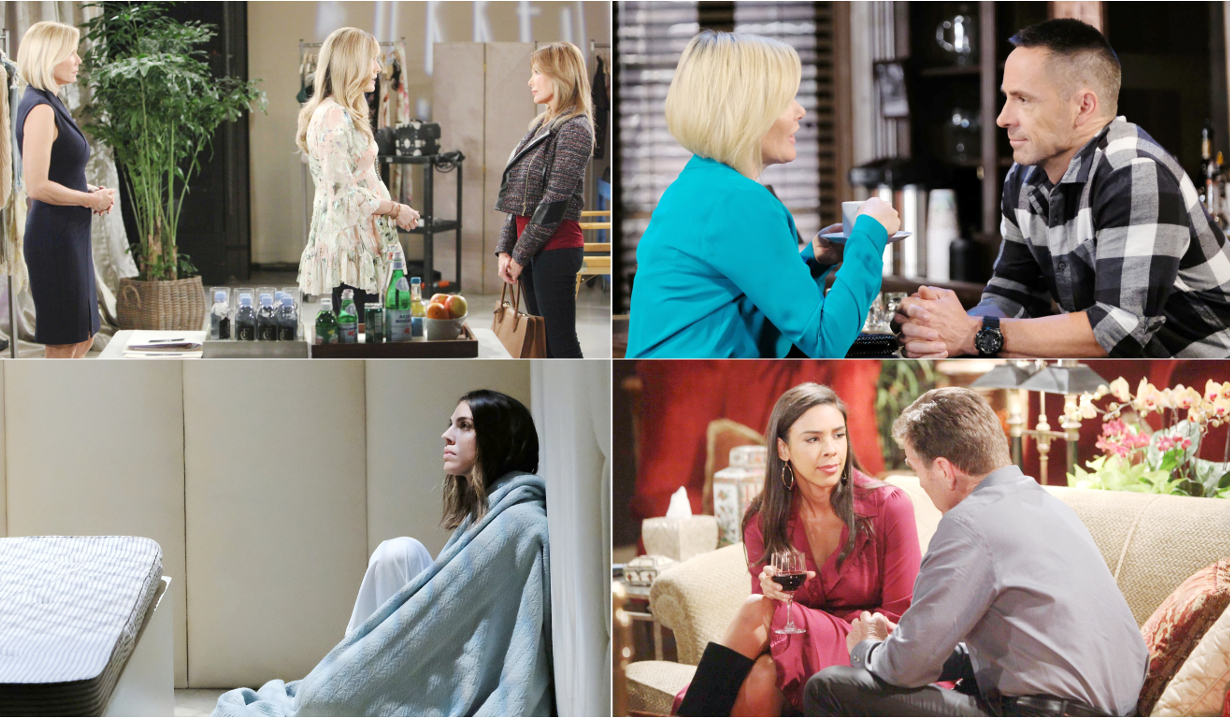 Get a look of what’s in store as Soaps.com brings you spoilers for the week of December 3 – 7 for The Bold and the Beautiful, Days of our Lives, General Hospital, and The Young and the Restless, plus Days and GH spoilers from December 10 – 14.

Brooke explodes after Hope tips her off about Taylor putting a bullet in Bill. She manages to use this confrontation to rehash her entire acrimonious history with her old enemy. After coming down off that, she still has the energy to be flabbergasted by Bill telling her that he chose not to press charges against the woman who shot him. Brooke then starts arguing with Ridge about whether Taylor is more of a threat than Bill. Taylor does her best to convince Ridge and Steffy it’s not her and Liam tries to convince Bill that it is. But murderous rage and the prospect of prison don’t stop Taylor from getting flirty at Steffy’s party. Meanwhile, Pam pushes Donna to get Quinn out of Eric’s life and Donna decides to use lingerie to do it. Check out Soaps.com’s The Bold and the Beautiful spoilers to find out who else is worrying about Taylor.

More: Soap stars in Your Baby is Mine

Abigail manages to manipulate Stefan into thinking she’s Gabby so he’ll get her out of Bayview. He’s in for an unpleasant surprise though, and not just from her. Kate and Gabi also decide it’s time to ruin his life by framing him. But their plan may be momentarily waylaid when Chad runs into Gabi with some paternity results. Across Salem, Will and Sonny also realize that their lives are about to get worse thanks to what Leo has on them. Rafe’s life also seems perched on decline as Eli tells him that Hope is having an affair. And Brady tries to make things right with Eric, but Eric may have other things on his plate since Sarah wants him to raise Holly. Finally, Chloe has a glimmer of happiness when Lucas comes back but what he tells her radically alters their future. Read the Days of our Lives spoilers to see who tries to force a confession from Ben.

In Port Charles, things aren’t looking great for Griffin, but he keeps defending himself. Maybe the evidence that lands in Jordan’s lap will help him? She obsesses over that while Chase digs for more clues and follows another lead regarding Mary Pat’s beheading. Meanwhile, Ava and Julian are losing their minds in grief. Alexis doesn’t have a lot of time to comfort him since she has Sam distracting her. Felicia remains fixated on Maxie’s relationship with Peter and Finn tries to convince Anna that their relationship is okay. She’s distracted by whether Obrecht’s relationship with Britt will be enough to manipulate her into getting caught. While Laura is caught off guard, Sonny gets caught up with Margaux before receiving an unusual visitor. Take a look at our General Hospital spoilers to discover who has an invitation for Willow.

As Kerry is being wooed by Jack, Sharon finds herself making all the wrong moves. Michael and Lauren are startled when Fenmore suddenly materializes in Genoa City unexpectedly. But that’s nothing compared to the shocks that Nikki is experiencing. Her week goes from disturbing to devastating. First, she winds up in bed with JT’s dirty old clothes beside her and then the Newman barn goes up in flames. Will this be enough to knock her off the wagon? As more terrible things await her, Devon tells Nate all about his grief. And Billy is in store for some grief of his own as Victoria and Cane team up and spell a few things out for him. Always ready to take a risk, he tries testing his old chemistry with Phyllis and Abby decides to take a leap. Visit The Young and the Restless spoilers to learn who isn’t connecting.

Another Murder and a Kiss in Soaps...