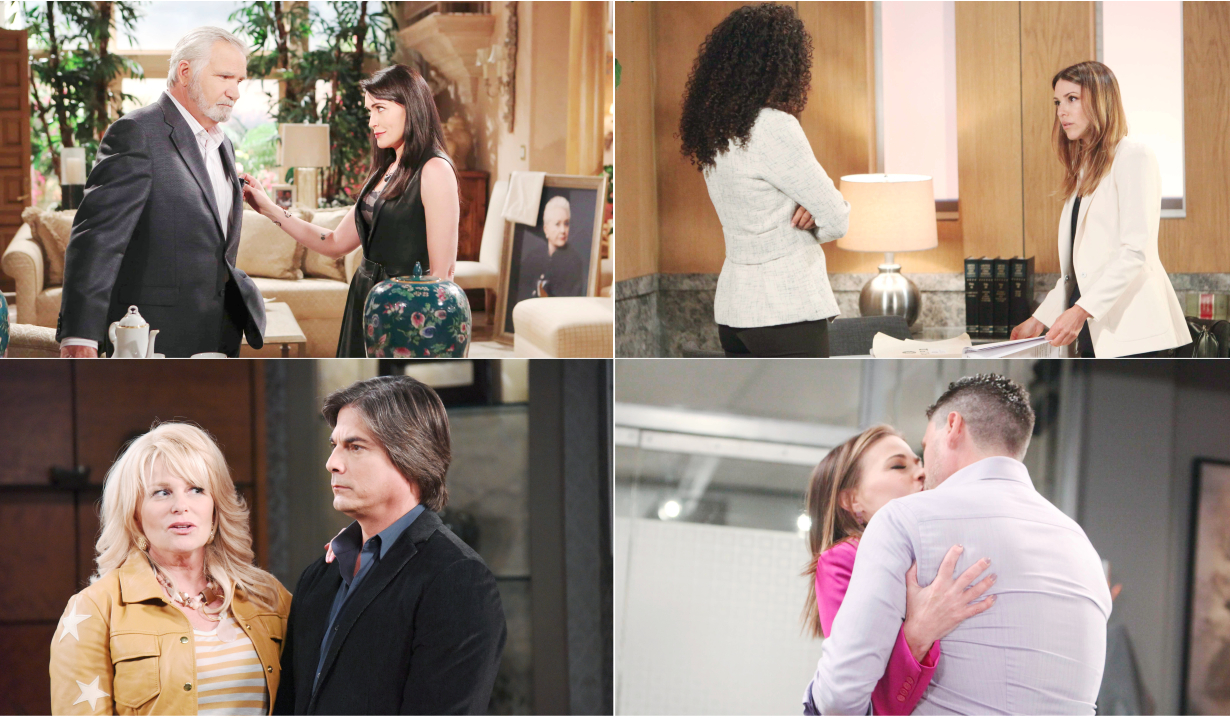 The manic and manipulated.

Get a taste of what’s ahead as Soaps.com brings you fresh spoilers for the week of November 5 – November 9 for The Bold and the Beautiful, Days of our Lives, General Hospital, and The Young and the Restless, plus Days and GH spoilers from November 12 – 16.

Bill gets conniving after he finds out that Justin has dirt on Ridge’s dubious relationship with Judge McMullen. He startles Brooke when he tells her that there might have been some dirty dealing in the custody case, leaving her to decide between telling the truth or supporting Ridge. While Ridge tries ordering Brooke to stay away from his enemy, Bill enlists Ken to help him get the evidence he needs. Meanwhile, Quinn thinks she’s stumbled on evidence that her marriage is in danger when she catches Donna and Eric reminiscing about their past. She confronts her rival, but Donna refuses to be pushed around. And Emma sees Xander flirting with Zoe. To her surprise, he asks Emma to take the next step in their relationship. Check out Soaps.com’s The Bold and the Beautiful spoilers to find out who makes a special appearance at the fashion show for the Intimates line.

With bated breath, Sami feasts her eyes on the DNA results for the mystery patient. Pretty soon, she’s frantically searching for him before she winds up being cornered by a scalpel wielding Susan. Across Salem, Chloe pops Sarah’s balloons when she drops in at her engagement party and lets a few things slip. While Rex is feeling the rage of his fiancée, Bonnie decides it is time to hightail from town and leave Mimi and her child behind. And despite being slightly out of her mind, Abby manages to outwit Kate while Gabi flips out over Chad’s plan to save his wife. This includes kidnapping. Read the Days of our Lives spoilers to see who finally get married.

Even from a distance, Nelle manages to annoy the Corinthos family. Predictably, Carly turns to Jason for support while Nelle continues to manipulate the situation. Carly is still annoyed about Ferncliff and interrupts Laura. Michael is trying not to get dragged into everything and Sonny remains smug in his certainty. This may turn to a rather different feeling as Margaux manages to dig up the evidence that she needs. As something piques Ava’s curiosity, Curtis tries to be helpful, and Lucas discovers a new way to look at his situation. The doctor is still not clear on what’s going on right under his nose, however. But Britt could be after Brad tells her a secret. Across Port Charles, Nina and Franco do some bonding while Liz worries about what Cameron is really getting up to and Julian does all he can to console Kim. Take a look at our General Hospital spoilers to discover who has Spencer figured out.

With all the misery going around, it was likely only a matter of time before Billy and Sharon to commiserate together. But that’s short-lived after he gets some startling news. Meanwhile, Nick has been doing some commiserating of his own as he gets close to Phyllis again. With everyone apparently distracted, Jack plows ahead with another daring move. And Nikki can barely dare to breathe. She tries to keep her head but that could be hard after what Rey says. However, the detective is soon distracted when his wife unexpectedly pops up in Genoa City. Visit The Young and the Restless spoilers to learn who makes a surprising decision.