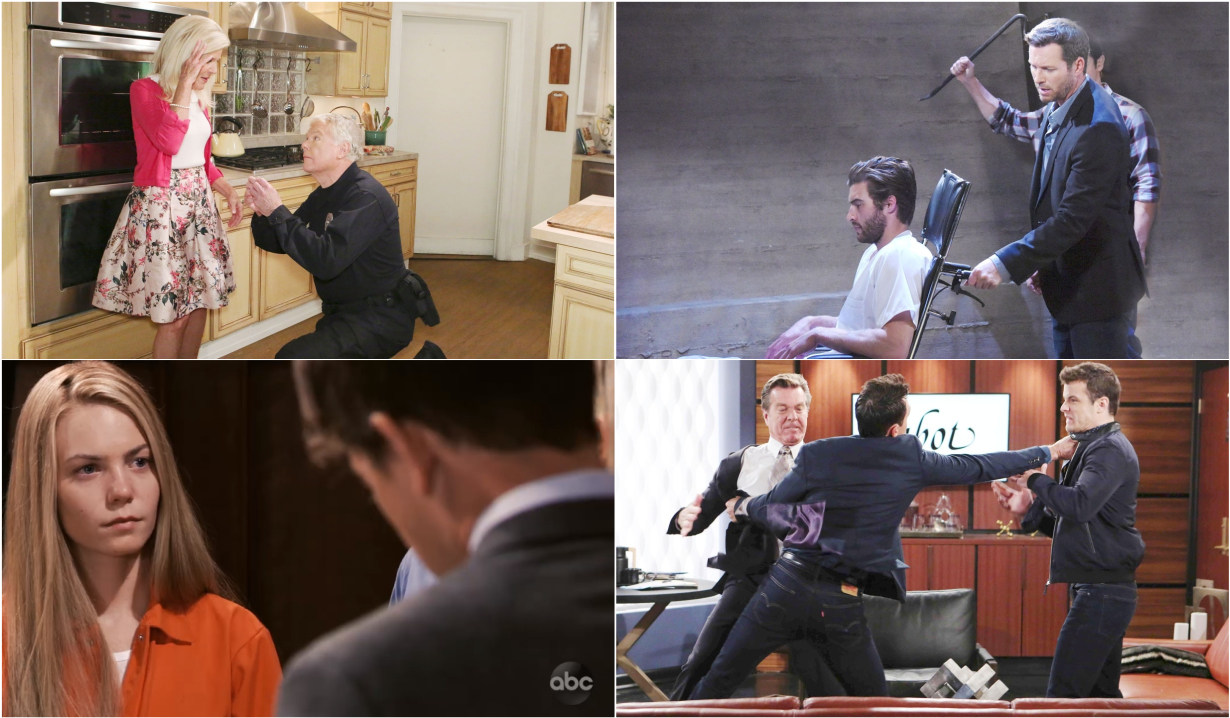 Soaps.com is back with highlights of what went down last week on Bold and the Beautiful, Days of our Lives, General Hospital and Young and the Restless episodes, as well as a teaser for what’s to come on each soap opera.

First on The Bold and the Beautiful, Brooke insisted to Ridge that she stopped Dollar Bill’s kiss and was committed to her husband. Someone should tell Bill, because later he cornered Brooke and admitted he never should have let her go. Katie informed an upset Thorne that she was allowing Bill to see Will due to Ridge’s meddling in the custody hearing. And Charlie proposed to Pam, who accepted, but declared she wanted to be married under Stephanie’s portrait at the mansion, not Quinn’s! Coming up: Bill goes over a balcony after a fight with Ridge!

Over on Days of our Lives, Xander and Kristen held Brady hostage at the warehouse, where Sami made her way to the room with the mystery patient and a door marked ED, possibly for EJ DiMera. Gabi drugged Abigail and smashed herself in the head with a silver platter to convince everyone that Abigail’s alters were back and dangerous as ever. Maybe it’s Gabi who needs psychiatric help. And Mimi reached out to Belle and admitted that Bonnie’s baby is actually hers just as her ex Rex returned to town. Coming up: Eric receives devastating news about Nicole.

And on General Hospital, Nelle received the maximum sentence and was hauled off to prison, but not before warning Michael they’d always be connected. Spencer returned home surprising Laura, while Ryan used the boy’s presence to keep Laura’s advances on him at bay. Drew refused to help Margaux put Sonny away in exchange for the flash drive with all his missing memories on it. And Sonny realized Margaux’s mother was having an affair with the mobster that her husband worked for. Coming up: Drew confides in Elizabeth about his situation.

Finally, on The Young and the Restless, Victoria and the others were warned the police would find out what was buried in Chancellor Park if they did not pay the blackmailer. Jack reeled over Ashley’s deception about his father and at an emergency board meeting Ashley was ousted from the CEO job she just got. Dina revealed there was one more important piece of information John left behind. And Billy returned from the quickest stint in rehab ever and gloated to Summer and Phyllis that he only had sex with Summer to hurt her mother. Coming up: Jack shreds papers John left for Ashley.