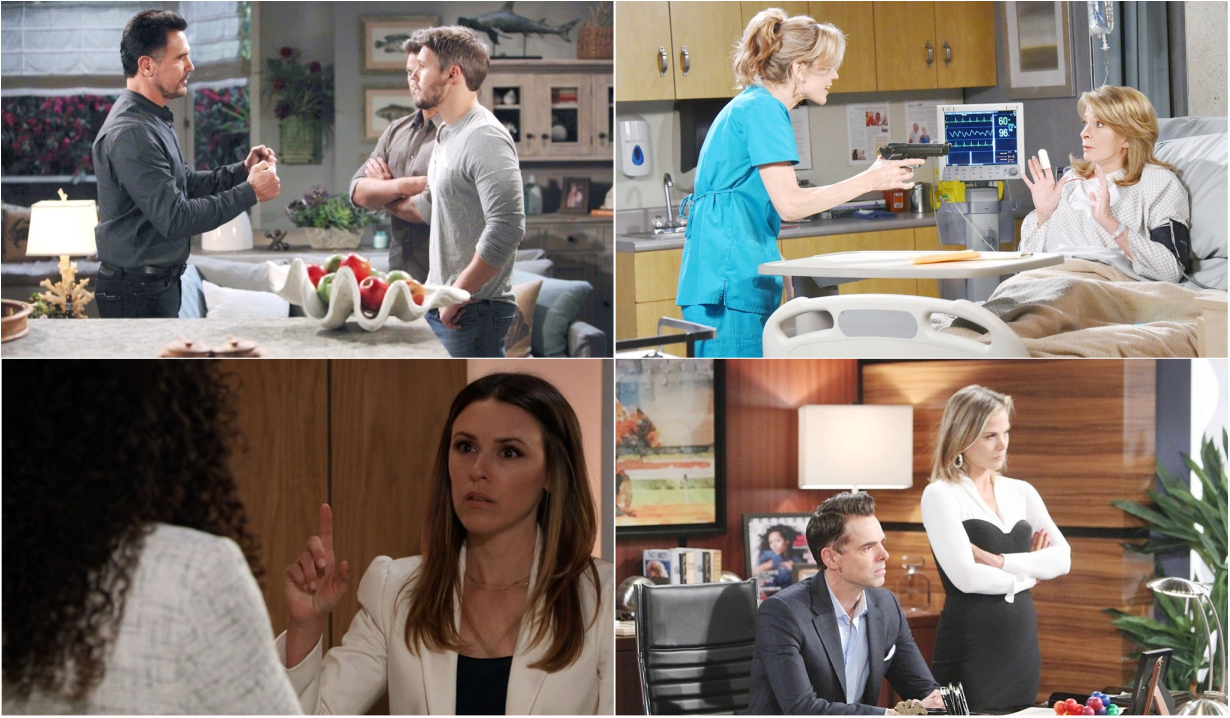 Soaps.com has Bold and the Beautiful, Days of our Lives, General Hospital and Young and the Restless highlights from last week’s episodes, plus a teaser for each to come.

First on The Bold and the Beautiful, Katie and Thorne had a rushed wedding, while Bill went to Liam and Wyatt in hopes they’d testify at the custody hearing on his behalf. What is Dollar Bill smoking? Ridge continued to pressure the judge, and Brooke was subpoenaed to testify on Bill’s behalf. At the hearing, Katie pled her case that she and Thorne could give Will a stable life and Bill had been an absentee parent. Coming up: Brooke learns Ridge influenced the judge.

Over on Days of our Lives, Eric and Jenn’s relationship fell apart after she told him Brady blackmailed Nicole into leaving him, while Brady dumped Eve when she admitted he lost custody of his son Tate because of her actions. Hattie pressured John into marrying her but was surprised by Kristen DiMera on her wedding day and had to convince her she was not the real Marlena. And as Shawn and Rafe investigated the validity of the new evidence against Ben, Ciara turned to Tripp. Coming up: Sami learns the truth about Marlena.

Now on General Hospital, Margaux realized that Sonny killed her father, and Mike covered it up by dumping his body in the basement of Julian’s pub years earlier. Oscar confronted his parents who finally admitted he had an inoperable brain tumor, but they were hopeful about a new experimental treatment, which is always available on the soaps. And Ryan, masquerading as Kevin, came face to face with the object of his obsession, Felicia. Coming up: Laura returns home to the man she thinks is her husband.

Finally, on The Young and the Restless, Billy was furious with his family for their gambling intervention, but later admitted to Phyllis that he���d been stealing from Jabot. Jack and Victor learned from the DNA results that they were not brothers, and the search for Jack’s father continued. Could he be an Abbott after all? And Nick and Sharon both decided to tell each other the secrets they’d been keeping but were persuaded by others it would ruin their relationship. Coming up: Mariah tells her mother that Nick and Phyllis had sex!