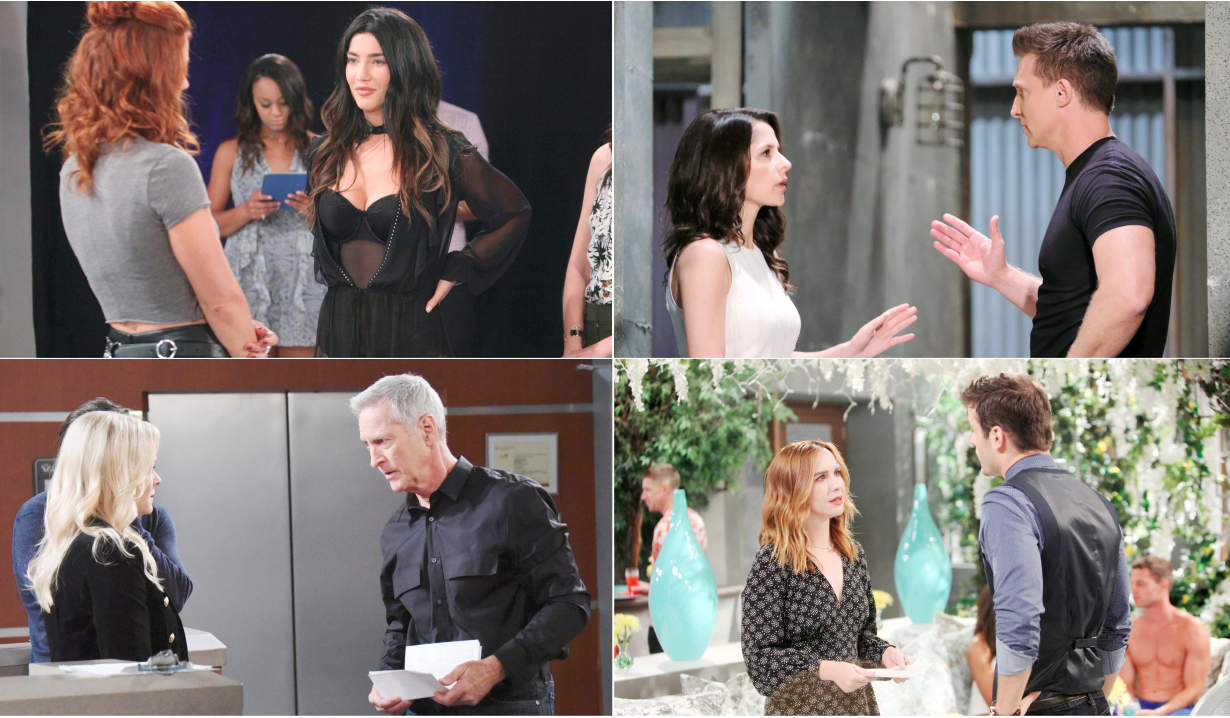 Soaps.com brings you the newest spoilers for the week of September 17 – 21 for The Bold and the Beautiful, Days of our Lives, General Hospital, and The Young and the Restless, plus extra Days spoilers for September 24 – 28.

Thorne is not shy about telling the world of his engagement to Katie. Of course, this does not sit well with Bill, who is feeling more rage than usual thanks to his latest battle with Ridge. Both men plot to win in the custody battle and Bill pulls Justin in to help him put together a victorious strategy. Unfortunately, Thorne also has an idea about how to win. As Ridge meets with the judge to attempt to swing things, Bill meets with Brooke and tries to get her to throw her support behind him. This only makes her own position more difficult. Meanwhile, Sally and Steffy both have plans for Xander and he winds up becoming a Forrester model. But this good news isn’t enough to stop Steffy from fighting with Hope about Sally. Check out Soaps.com’s The Bold and the Beautiful spoilers to learn who kisses Brooke.

As Claire throws herself at Tripp, Ben continues trying to convince Ciara that someone is setting him up. But will she listen? He’s not the only one who is suspicious. Even Rafe thinks that Hope planted evidence to use against Ben. While Hope gets defensive, Chloe feels compelled to try to defend Lucas from the manipulations of Bonnie. Lucas eagerly waits for the paternity test results and asks a major favor from Adrienne. Across Salem, Gabi’s plans for revenge continue to tick along as she drugs Abby. And things are not looking significantly better for Marlena as her family prepares to say goodbye forever. She’s taken off life support, but John still has plans to save her. Read the Days of our Lives spoilers to see who tries to stop Belle from visiting her mother.

Remaining in Port Charles allows Robin to keep putting things into a new perspective. Perceptions are also changing for Nina and Anna as they discover that their lives have changed significantly. Maxie finds something else to be baffled by, which is only made worse when Nina pushes her to provide some answers. Across town, Drew demands some answers from Kim, which puts her in an awkward spot. Franco also finds himself in an odd position, Lucy finds herself on the receiving end of an unexpected invitation, and Cameron starts lying to Liz. While Sonny is surprised by something else his father does, Sam tries to help Jason stay on track and Anna starts to lose control. Take a look at our General Hospital spoilers to discover who accepts some guilt.

As Ashley meets with a mystery man, Billy’s future becomes increasingly uncertain. If his luck doesn’t run out on its own, Kyle is planning to make sure it runs out anyway. But will his plan to ruin Billy go too far? Across Genoa City, Victor feels compelled to issue a warning to Jack. But even after the two men face off, the mustache is left with a hard decision to make. Nikki’s loyalty is sorely tested, and Mariah decides it’s time to take some risky action, but at least Sharon has something to be happy about. Visit The Young and the Restless spoilers to learn who makes a confession.