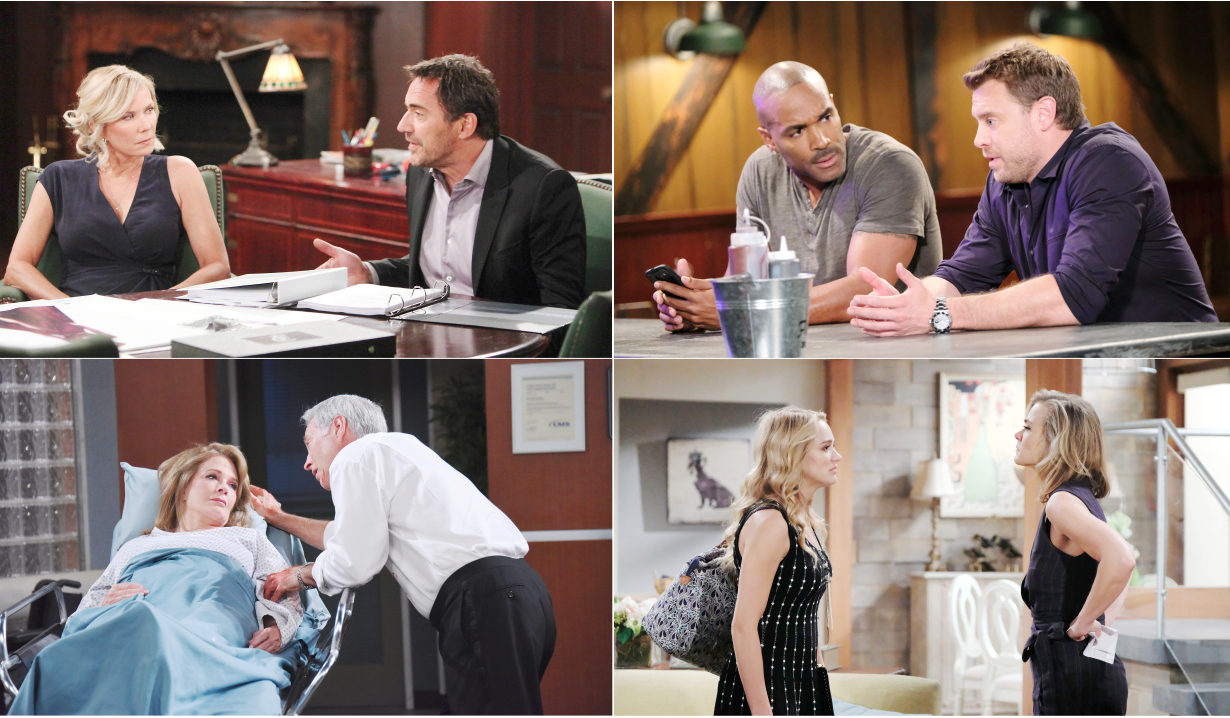 Get your week off to the right start with the newest spoilers from Soaps.com for The Bold and the Beautiful, Days of our Lives, General Hospital, and The Young and the Restless.

Thorne does his best to reassure a worried Katie about her fraught situation with Bill. But will giving the bearded one a warning be enough, or will it only make things worse? It will no doubt make matters worse when Bill tries to get Brooke on his side. Meanwhile, Liam and Hope have reasons to fear for their child and make a jaunt to the hospital. Steffy soon appears and tries to help the frightened couple. But this moment of respite from their squabbling is short-lived. Brooke worries that the two women are still rivals and things get tense between her and Ridge. This spills directly into work as Ridge makes it clear that there will have to be a sacrifice at Forrester Creations and Steffy argues that it should be Hope of the Future. Check out Soaps.com’s The Bold and the Beautiful spoilers to find out which line will be kept.

While Paul faces danger that could leave him dead, Will puts another nail in the coffin of their relationship as he starts planning a future with Sonny. But those plans may not run as smoothly as they are hoping for. Meanwhile, Eli tells Lani how he really feels about her and Kayla learns some upsetting news about Steve. John remains in a stupor of sadness and rage as Marlena recovers from her surgery. Eric and Brady try to support him, but what Kristen has planned next could complicate the situation. And Abby tells JJ that she thinks that Gabi is gunning for her and the two women soon have a big fight. Read the Days of our Lives spoilers to see who drops a bomb on Lucas.

Alexis has another reason to be filled with rage. But not everyone in Port Charles is feeling so bad. Curtis has some renewed energy thanks to a surprise from Jordan. Ava’s unusually optimistic, but that’s probably misguided. Her brother has other concerns and Julian enlists Drew for his help but Drew seems to be perplexed by something. As Julian digs around for answers, Kim comes out with a secret that could have lasting repercussions. And Nina tries to keep a handle on her situation, but that doesn’t stop her from getting a crazy idea. Take a look at our General Hospital spoilers to discover what has Cameron disappointed.

Lily’s day in court gets underway in Genoa City. At the hearing, Cane admits that he didn’t tell his wife that she ran the light and Shauna urges the judge to be merciful. But what will Devon say when he takes the stand? Sharon may not be in a merciful mood either thanks to Tessa’s suspicious behavior. Although Nick making big promises to her might keep her a bit distracted. While Abby is busy standing up for Arturo, Summer tries to stick up for herself. She comes back to town and is shocked to discover that her mother and Billy have moved out. Apparently not learning from her recent debacle, Summer threatens to expose Phyllis’ dalliance with Nick once again. Visit The Young and the Restless spoilers to learn who pushes their luck too far.