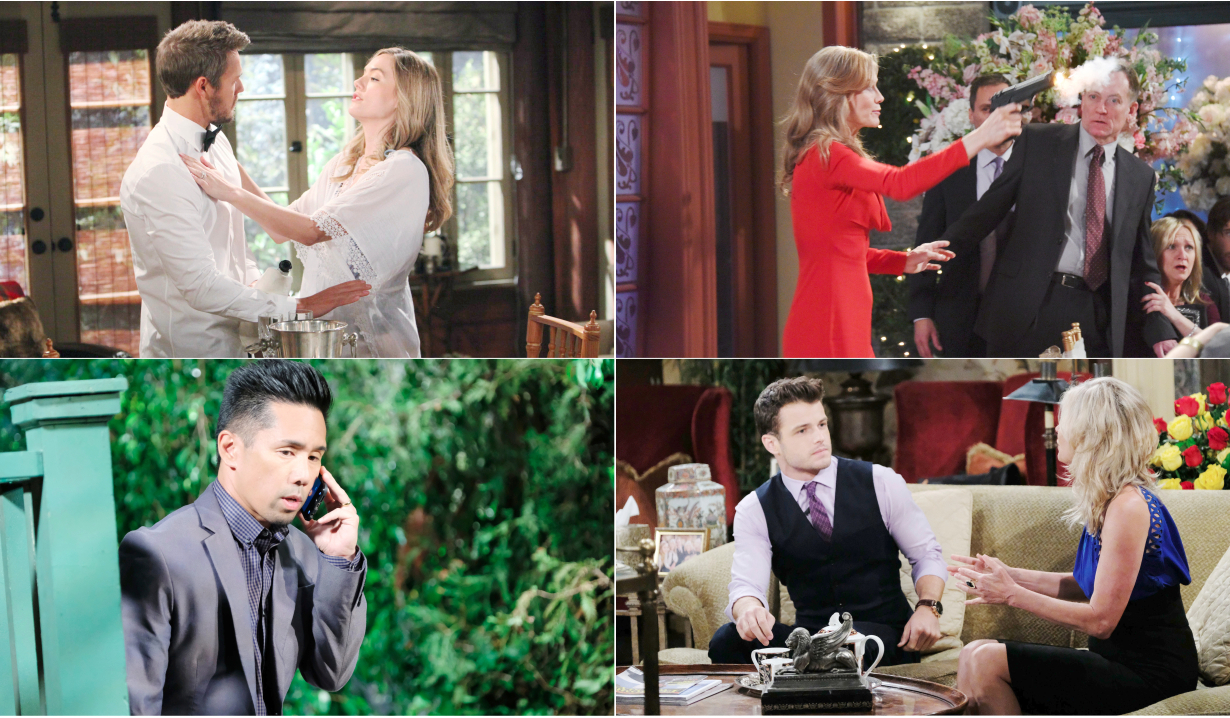 Start your week with the newest spoilers from Soaps.com for The Bold and the Beautiful, Days of our Lives, General Hospital, and The Young and the Restless.

Married life isn’t panning out quite as well as Hope had been hoping. When she wants to bring Liam to her ultrasound appointment, she finds him spending time with Steffy. Making things worse, he leaves Hope alone the minute her appointment is finished so he can get back to Steffy and Kelly. Across the city, Bill remains determined to keep shared custody of his son, but this is being complicated by an interloping Thorne. When the Forrester sees how hesitant Will is to spend time with his father, Thorne decides that he and Katie should use this to their advantage. Bill discovers what they are doing and threatens to play dirty by using her history of alcoholism if she fights for sole custody. As he is warning Katie that she’ll lose if she fights him, Brooke tries to defend Bill’s actions to those around her. And Xander wants the over-ambitious Zoe to go easier on Emma. Check out Soaps.com’s The Bold and the Beautiful spoilers to find out who has an offer for Quinn.

Although John has gone down the aisle with Marlena many times, this time around doesn’t disappoint in the drama department as her white dress turns red thanks to a bullet. As John gasps in horror, Sami nearly explodes in rage. She’s dragged down to the Salem PD by Rafe where she proceeds to rip into Hope. The week isn’t going well for Brady either. Kristen takes Claire hostage and gets threatening, so she can coax Brady into her embrace. As she alternates between threatening and trying to seduce him, events seem to work for the latter, leaving Eve horrified when she walks in on them. Things only get more terrifying when Paul and Sami arrive just in time for a confrontation. Read the Days of our Lives spoilers to see who makes a shocking discovery at the club.

As Sonny ponders what he should do next, he’s surprised when Oscar shows up to confide in him. Meanwhile, feeling more isolated thanks to his antics, Griffin manages to gain a bit of insight into what he’s been doing. However, Ava continues to feel a lot less thoughtful but her plans for revenge may be sidelined by some added complications. Across Port Charles, Kim has some news about Nelle and Julian has some news that he hopes will keep Brad calm. Things are very far from calm for Nina though. Take a look at our General Hospital spoilers to discover who gets disturbing news.

As Jack tries to face the facts, Lily has a confession to offer. Sharon may be looking for a confession from Tessa since she suspects her of something. Mariah tries comforting the distraught Tessa but soon loses contact. Meanwhile, Rey’s ongoing presence in Genoa City continues to ruffle some feathers. Nikki’s back is already up about Ashley, but when she isn’t worrying about her she’s concerned that Victoria is obviously losing the plot. While Victoria works hard to keep a grip, Billy tries to keep hold of his relationship by opening up to Phyllis. She admits that she’s trapped her meddling daughter on the Jaboat and the couple immediately up and moves into the Abbott family house, which causes instant discomfort to Ashley and Kyle. Visit The Young and the Restless spoilers to learn who Victor is giving advice to now.