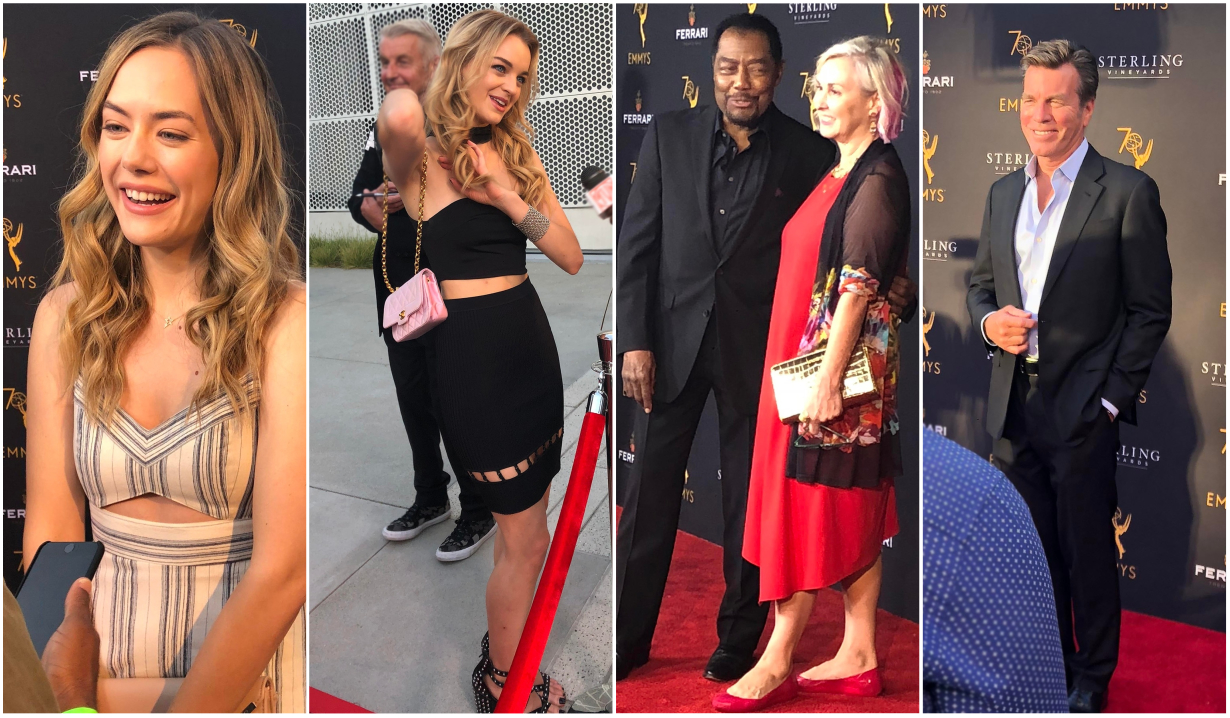 Chatting up the stars of soap operas about everything from their characters to their summer vacations.

The Television Academy held its annual Daytime Programming Peer Group Celebration in Los Angeles, California as a part of its Primetime Emmys season. The Daytime Emmys is long gone for 2018, but it’s a wonderful celebration of all the artists who make up the two segments on television.

Soaps.com hit the red carpet to talk to some of your favorite actors from The Young and the Restless, The Bold and the Beautiful and one actress from Days of Our Lives. We found out the latest on storylines, summer vacations and the hot titles the stars are reading right now.

Peter Bergman (Jack Abbott) kicked off the red carpet early and gave us the inside scoop on what Jack is doing on Y&R.

“Jack is still trying to figure out who he is and he’s getting closer,” Bergman shared. “It’s not in self-reflection, it’s more footwork and looking at a lot of the possibilities.”

He also gave us his imagined update on his prior character, Cliff Warner on All My Children. “Cliff is running a hospital in Iowa. Bobby is a grown man. Cliff has grandchildren now. He was a good guy in a lot of ways,” he explained. You know I talked to Taylor Miller [his love interest, Nina Cortlandt] last week. We are still in touch. I’m the luckiest guy in the world to have played two great characters.”

Another longtime character, whom we never see enough of, is Esther Valentine. Kate Linder shared her storyline update.

“You never know what’s going on in the Chancellor house, so you have to stay tuned,” Linder said. “I am hoping we will see more of Esther.”

Noah Alexander Gerry joined the Y&R cast in 2017 as the latest actor to portray Charlie Ashby. It looks his character’s troubles are going to continue in the near future.

“Charlie is going through a lot with his mom and all of this accident stuff. He’s trying to hold his family together and he doesn’t know how, so he’s struggling internally and externally,” said Gerry. “He is doing things that he normally wouldn’t do.”

All three actors have been enjoying their summer by hitting a few locations while the weather was warm. Gerry went to Florida, where he spent a lot of time skateboarding.

“I hung out with my friends, watched a lot of movies and played video games,” Gerry laughed. “I just relaxed and pretended I was still in high school enjoying my summer break.”

For Bergman, it was all about celebrating love.

“We went to a wedding in Rockville, Rhode Island. It was one of those weddings of the century; it was stunning,” he said. Kate Linder was focusing on her charitable work with her 20th-annual fundraising tea in Vancouver, Canada where she raised over $80,000. She’s also still working with United Airlines as a flight attendant.

“I just got back yesterday from Kona, Hawaii. I worked all night,” she said. “We just missed the hurricane.”

All three actors had interesting summer reading options that ranged from the fun to the downright heavy.

Linder chose TV Guide so she would “know where The Young and the Restless is all over the world.” Gerry went deep with A Clockwork Orange.

He admitted, “It’s a hard read, but it’s making me better at comprehending things like that.

“I am reading a Philip Roth book called The Humbling about a 65-year-old actor who suddenly realizes he can’t do it anymore,” he described the novel. “He has a crisis of confidence.”

Soaps.com got some lively responses from the Y&R cast about the one thing they can’t live without right now. Bergman loves his caffeine. “The one thing I can’t live without right now is Nespresso,” he admitted. “I like my caffeine jolt. I am a purist. I like coffee.”

For Gerry, it’s all about Taco Tuesday!

“There’s this taco place near my house and every Tuesday there are $1 tacos,” he said. “I look forward to it every week.”

As for Linder, she’s totally a CBS woman. “I can’t live without The Young and the Restless. It’s my life!”

Over at Y&R’s sister show, The Bold and the Beautiful, two of the newer stars joined in on the festivities, Nia Sioux (Emma) and Annika Noelle (Hope). They were joined by Jennifer Gareis (Donna), who filled us in on Hope Logan’s latest shenanigans.

Sioux gave us the update on Emma the Forrest Creations intern and what talents she’s hoping to use in the future.

“Emma and Alexander have some drama going on. You just saw the wedding scenes with the cake fight,” Sioux said. “I haven’t had a chance yet to sing on the show, but I am hoping to use all of my talents. It would be great. Just acting on the show is pretty cool.”

Fans should expect to see Gareis on Thursday’s episode, so keep those eyes wide open.

“I might be coming back tomorrow. Wink, wink,” she revealed. “Donna will continue to cause trouble, but she’s been very supportive lately and giving advice to her sisters. It’s too back she can’t find herself a husband. I made a backstory for myself, though. Donna is with a lot of men in Europe right now, in Paris. She volunteers at The Louvre.”

Gareis’ imaginary backstory for Donna probably stems from her recent European vacation with her husband and kids. She also treated herself to two other incredible vacations. m Miami with my sister,” she shared. “We did the spa thing, drinking wine, wearing bathrobes.”

Sioux spent much of her summer traveling and she admitted that she had only spent two days in her bed in Pennsylvania where her family is based. She did manage to have an epic summer vacation, though.

“I went to Australia with my mom and then I went to Orlando, Florida with the rest

of my family,” she said enthusiastically.

Noelle explained that her fascinating summer reading choices were based off of a national park visit she did right before she started shooting The Bold and the Beautiful.

“I am reading a book [called The Wisdom of Wolves by Jim & Jamie Dutcher] about the language of wolves and a group of scientists who studied wolf packs and how they interact. It applies what we can learn from them with social interaction,” Noelle said. “I went to Yellowstone just after I booked Bold and the Beautiful. I went and traveled by myself. It was life-changing and amazing. It’s why I became obsessed with wolves.” be the best parent she could possibly be. “I’m reading How to Talk so Kids Will Listen & Listen So Kids Will Talk,” she told us. “It’s really good advice. When I apply it, it’s amazing. Note to self, listen to the book.”

It sounds like it is working because the one thing she can’t live without is her “kiddos and husband.”

For Noelle and Sioux, their fur babies rule the day and the Internet. Both of their very important pets have their own Instagram accounts.

I can’t live without my cat, Mr. Burrito Man. He has his own Instagram account: TheBurritoManKitty,” Noelle laughed. “He is my furry baby. I’ve had him now for seven years. If I am having a rough day, he knows and comes to sit on my chest. He rehearses with me. That’s my little muffin.”

“I can’t live without my dog. I got a rescue dog a few weeks ago. Her name is Sasha, she’s so cute. If I could, I would have her here tonight,” she laughed. “She has her own Instagram account, MissSashaFierceTheDog.

Welcome to The Bold and the Beautiful family, Miss Sasha Fierce!

Olivia Rose Keegan was the only Days of Our Lives cast member Soaps.com had a chance to speak to, but she gave us the details on Claire Brady’s rollercoaster storyline.

“Claire is about all of the drama. Deep down, she just wants to be loved and she wants attention. It’s coming out in all of the wrong ways,” Keegan revealed.” It makes me think there’s something deeper going on. She’s meddling in too many people’s lives.”

One recent scene that really stood out to Keegan is Claire’s frying pan incident with Ben. She gave us the inside scoop on how they filmed that moment.

“I love having fun with the comedy and living in the moment. And the frying pan scene was my favorite,” she said. “We had to film it seven times. Even though it was a fake, rubber frying pan, he [Robert Scott Wilson] had a lump on his head by the end. I can’t imagine that feels great.”

Keegan’s summer vacation took her from coast to coast as she headed back to New England to spend time with her family. “I had a family reunion in Freeport, Maine. Lots of mosquitoes and my sister and I were scratching every morning. It was so gnarly,” she said. “I also created a lot of new music and I have so much, I want to put it out there into the world.”

All of that time with family did her a lot of good because she brought her older sister, Jessica, as her date to the daytime television event.

“I can’t live without my sister. We were bickering in the car on the way over, but it’s all good,” she laughed.

A behind-the-scenes shot of some of the actors on the red carpet: