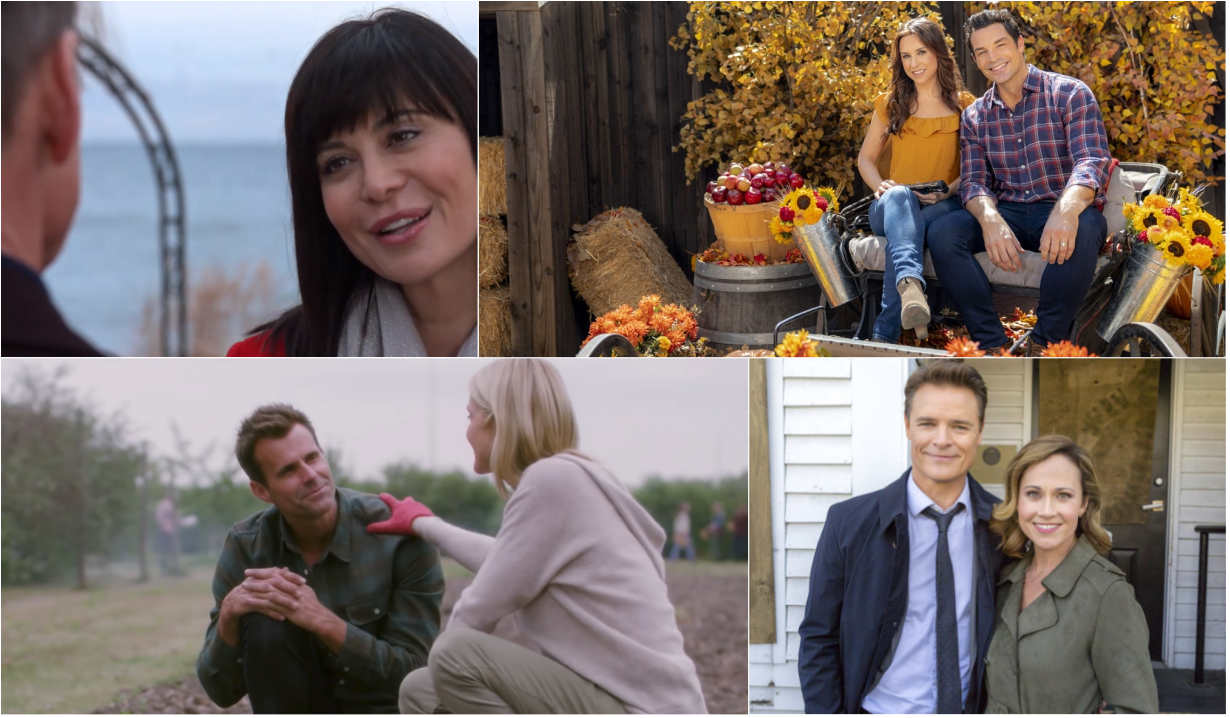 Six new romantic movies to make you swoon this autumn.

Summer is almost over and though the Hallmark Channel just wrapped up its Summer Nights movie premieres, the romance network is back with another round of premieres for its Fall Harvest event. Soaps.com has the details for the six new movies that will run on Saturday evenings from September 22 through October 20 and ends with a special two-hour Sunday October 21 airing of an all-new Halloween installment of Good Witch.

Days of our Lives alum Nikki DeLoach (Brenda) stars as Natalie opposite former Bold and the Beautiful actor Dylan Neal (Dylan) as Eric in Truly, Madly, Sweetly. Eric’s aunt leaves him and Natalie, the owner of a food truck, a historical building that once housed a famous bakery. As they take on the renovations together, romance blossoms, but Natalie’s attempt to keep their relationship strictly business threatens the partnership, which in turn threatens their big grand opening. Tune in Saturday September 22 at 9:00 PM.

All Of My Heart: The Wedding

Former All My Children actress Lacey Chabert and Brennan Elliott are back as Jenny and Brian in the latest All Of My Heart installment The Wedding. As Jenny and Brian plan their wedding, Meg puts a damper on the festivities by claiming she’s part owner of their inn. In order to buy Meg out, Brian considers going back to Wall Street. The residents of Bucks County rally around the couple to help raise money but it isn’t enough. Though an investor arrives on the scene with the intent to rebuild the old inn, unlike Jenny and Brian’s plans to restore the structure, the couple focuses on their wedding with a hope for a happily ever after for themselves – and Emily’s Inn. The movie premieres on Saturday September 29 at 9:00 PM.

Taylor Cole (The Originals) and Tyler Hynes (UnREAL) appear in Falling For You, which surrounds a radio station manager named Lacey and a businessman who’s met his match when arriving in a small New England town. Though he’s preoccupied with work, Lacey convinces him to help with a fundraiser by taking part in her bachelor bake-off in order to save the station. The movie first airs Saturday October 6 at 9:00 PM.

Under the Autumn Moon

Lindy Booth (The Librarians) and Wes Brown (Hart of Dixie) play Alex and Josh in Under the Autumn Moon. Alex visits a dude ranch to possibly acquire the place for the outdoor adventure company she works for. Upon her visit, though Alex has her heart set on a big promotion within her company, she soon reconnects with the great outdoors and falls for the ranch’s owner, Josh, in the process. Catch the premiere on Saturday October 13 at 9:00 PM.

All My Children’s Cameron Mathison (Ryan) teams up withGenerations and Loving alum Kelly Rutherford (Sam) as Noah and Amy in Love of Course. Amy, who lost her husband six years ago, helps her daughter Cara get settled at a college in another city but never planned on taking a job there. Though her daughter isn’t keen on having her mother under her thumb, Amy becomes preoccupied with a professor named Noah, who proves that romance is still alive and that there’s a whole other world waiting for her. The movie airs Saturday October 20 at 9:00 PM.

The trio of Catherine Bell, Bailee Madison and James Denton returns for the new Halloween installment of Good Witch: Tale of Two Hearts as Cassie, Grace and Dr. Sam Radford. When Cassie’s family heirloom, a beautiful red ruby called The Heart of Middleton, goes missing from the ‘History of Halloween’ Middleton Museum exhibit, the townspeople begin to doubt their Halloween spirit. Amid conflicting emotions, the Merriwicks help to re-inspire their fellow Middletonians at an anniversary black tie Halloween gala at the museum honoring the lore surrounding the precious red ruby. Tune in for the two-hour special on Sunday October 21 at 9:00 PM.

So thrilled @nikdeloach agreed to join me in Truly, Madly, Sweetly for @hallmarkchannel. We’re shooting right now and hope you’ll tune in and watch this Fall. #fallfestival #cupcakes

Last four days on #allofmyheartthewedding @brennanelliott2 finally has an insta so you guys should give him a follow! I’m still trying to explain to him how to post. Bear with us 😉

#InternationalCatDay you say?! here’s another shot of me and my favorite co-star who is definitely not @wesbrown225

best day on set ever?! another amazing co-star!

The magic continues with an event so BIG it takes 2 hours! Join us for an all-new #GoodWitch Halloween Event this October! #Goodies