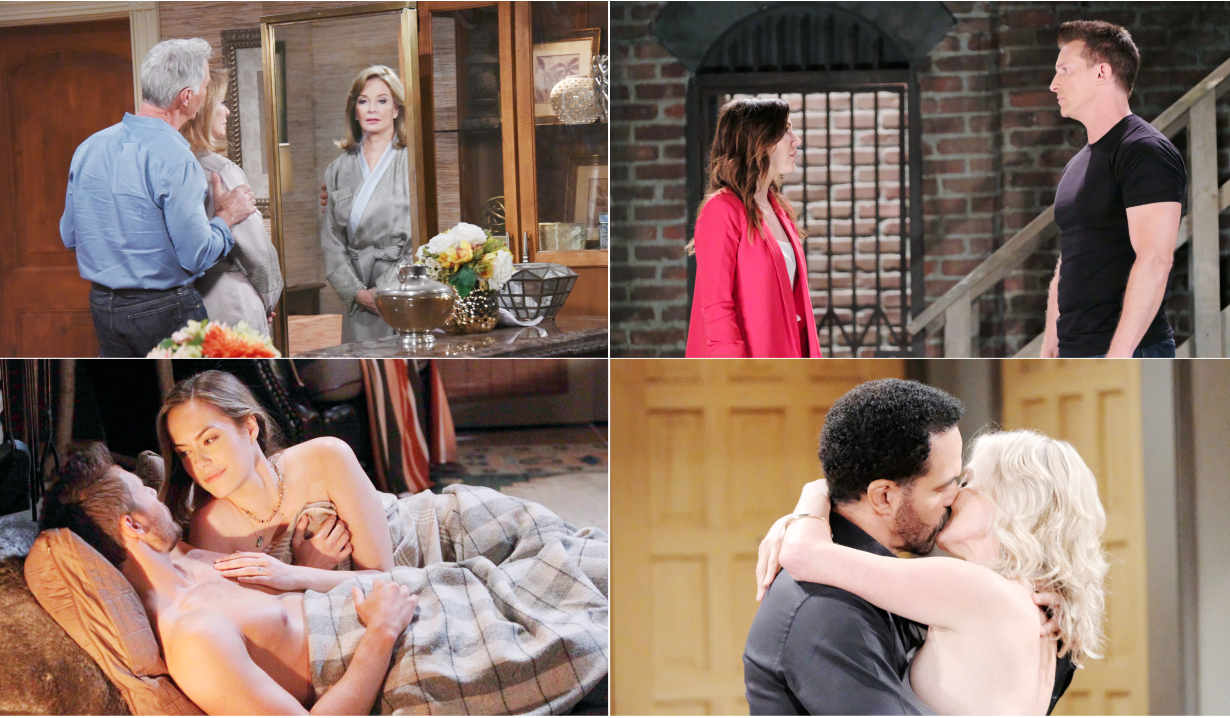 Hope’s wedding to Liam brings the Logan clan back together, but is she going to get the happy day she wants? Complicating matters, Taylor uses all her psychological powers to try to convince Liam that marrying Hope would be a serious mistake. Having already made some serious mistakes, Bill finds himself banned from the wedding and admitting his faults to Justin. But if Bill doesn’t manage to throw his shadow on the ceremony, someone else will. Taylor drops by the wedding reception and gets in a fight with Brooke while the newlyweds take off for their honeymoon in Brooke’s cabin. As the bride and groom’s bond is cemented, Thorne continues to chisel away at Katie’s relationship with Bill after the bearded one fails to come through for her and their son. Check out Soaps.com’s The Bold and the Beautiful spoilers to learn who shows up for the wedding.

John and Marlena’s wedding hits a series of snags before it has even begun. Getting things off on the wrong foot, the bride and groom could have some serious doubts about pushing ahead after they receive a bizarre gift by mail. The discomfort rises thanks to some chaos that occurs at his bachelor party. And Marlena is tortured by a terrible nightmare about what’s in store for her wedding day. When the day arrives, it includes an uninvited guest and Sami warning her mother that she’s in grave danger. Across Salem, Susan pops up at Will’s and begs him to forgive her. Could this be what finally allows Will to have the breakthrough that could let him recover his old personality? If he’s going to have a future with Sonny, it better be, since the Kiriakis has finally decided to give up on getting Will back. Read the Days of our Lives spoilers to see what happens when Adrienne confronts Bonnie.

With everything that’s been happening in Port Charles, Kevin has reason to seem more distracted than usual. Sam tries to offer a little support for Lucas, though she continues to feel the loss. Drew is at a bit of a loss for words as he tries digging into what Margaux is up to. Jason warns him that his new friendship with the DA could cost him dearly. Also feeling lost, Brad turns to Julian for some help and the Jerome launches an investigation of his own. While Kim tries to show some compassion, Sonny is starting to feel the strain as he comforts Carly. Jason, as usual, is even more worried about Carly, particularly since Sonny is distracted by looking after his father. And, in a surprising move, Valentin asks Curtis for some help. Take a look at our General Hospital spoilers to find out who has to think fast.

Abby keeps trying to keep the peace in the families, but she has a smaller battle to fight than Nick does. Nick attempts to mend things with Billy, but it looks like things will only get worse now that the fire between Abby and her mother’s lover is ready to burn everything down. Phyllis starts looking for revenge, but how far is she will to take it against her own daughter? Meanwhile, Kyle continues to spill what he knows when he probably shouldn’t. Jack takes advantage of a situation and Mariah keeps worrying about Tessa. Victor and Nikki could have something new to be worried about since Rey has set his sights on them. And Victoria gets some unexpected contact from Nate while Ashley’s relationship with Neil takes a turn after she stumbles onto something shocking. Visit The Young and the Restless spoilers to discover who Paul puts on edge.