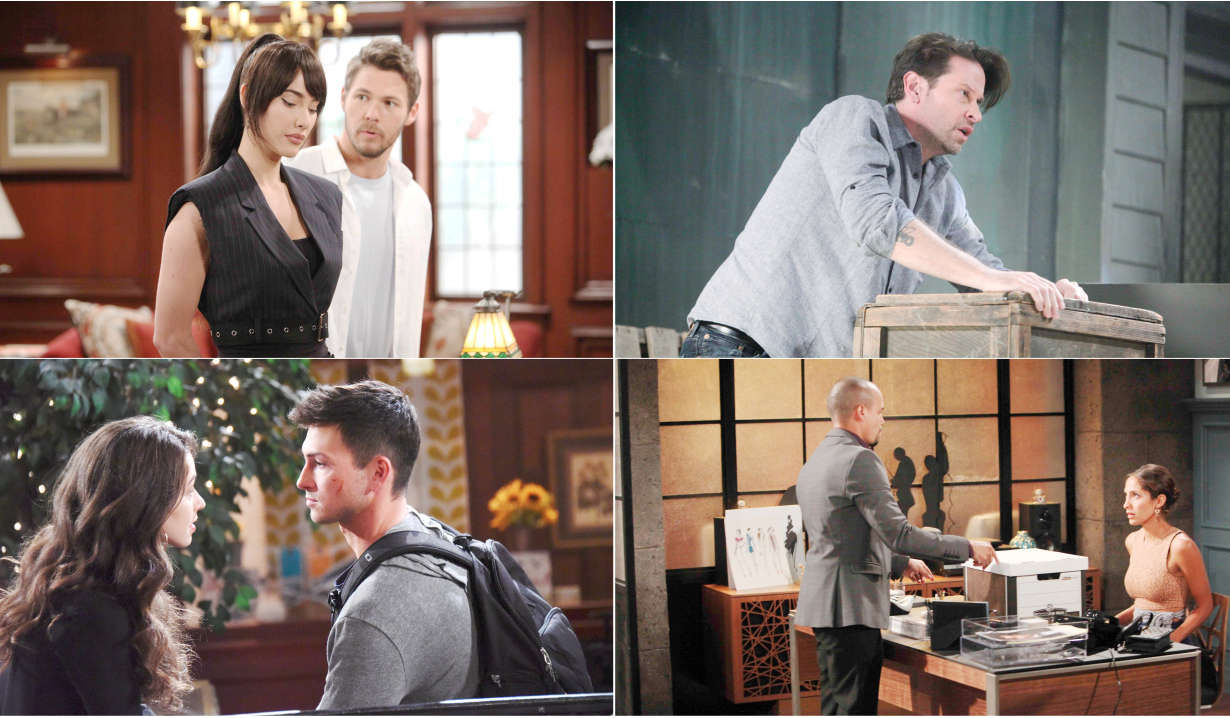 Take a look at what’s coming up this week with Soaps.com’s spoilers for The Bold and the Beautiful, Days of our Lives, General Hospital, and The Young and the Restless.

Once again, Steffy and Liam spend some time reminiscing. This time it’s supposed to help them firm up their decision about Kelly. Soon after, Steffy is spelling out her new business plan for Forrester Creations to everyone. But the family is already distracted by the latest news from Hope, which sparks very different reactions from Brooke and Ridge. While Hope swans off to plot her future with Liam, Wyatt gives his brother some advice and Liam asks him to stand up as his best man. But the wedding plans could hit a snag when Brooke tries to bar Steffy and Taylor from attending. Meanwhile, things seem to thaw a little more as Katie and Bill discuss their conflicts over Will, but that peace could be short-lived after Thorne pops up and antagonizes Bill. Check out Soaps.com’s The Bold and the Beautiful spoilers to learn who tips Ridge off about what Brooke is planning.

Furious that she has been keeping secrets from him, Steve confronts Kayla, but that’s not going to be enough to stop her from giving Stefan a helping hand. The situation isn’t great elsewhere in Salem either. Chad and Gabi are in the middle of a close moment when Abigail catches them together. Gabi decides to use all the upset to her advantage. Across town, Paul is also getting upset. He accuses Sonny of having an affair with Will, who happens to be busy ruining his grandmother’s relationship at the time. Will tips Kate off about Ted’s blackmail scheme and her hair nearly changes color. Meanwhile, Eve and Jenn continue to flip their wigs as they attack each other, and Tripp is outraged to discover that Ciara has asked Ben to move into their flammable loft. Read the Days of our Lives spoilers to see who pulls a gun on Ted.

Things continue to go wrong at the trial and this leaves Griffin in a very awkward position in Port Charles. As Scott tries to make some apologies, Kiki remains close to cracking. In an unlikely move, Franco tries to inject some calm into the situation and Alexis’ bid to settle things with the facts doesn’t go as well as she was hoping. Meanwhile, Jason has a new idea and it could involve asking Sam for yet another favor. Sonny gets a guest he was not expecting but he also gets an apology from Joss over what she did. Finally, Sonny corners Julian to have a word with him. Take a look at our General Hospital spoilers to find out whose emotions get the better of them.

Things are tenser than usual around Genoa City as Sharon and Victoria bicker to the point of nastiness. As Victoria gets defensive, things continue to deteriorate between Ashley and Billy. She leans on Neil for some support and he offers her some romance. It isn’t exactly romance between Summer and Kyle though. Instead, they discover some disturbing evidence that could cause serious problems. Could this have something to do with Phyllis? Her secret comes out and that means she needs some help. Is Nick going to be providing it? He’s already battling with his father. Meanwhile, the Winters family is still in disarray. Cane tells Lily about the big decision he’s made and she prepares herself for the worst as she tries to make amends to Devon. Visit The Young and the Restless spoilers to discover who stands up for Lauren.