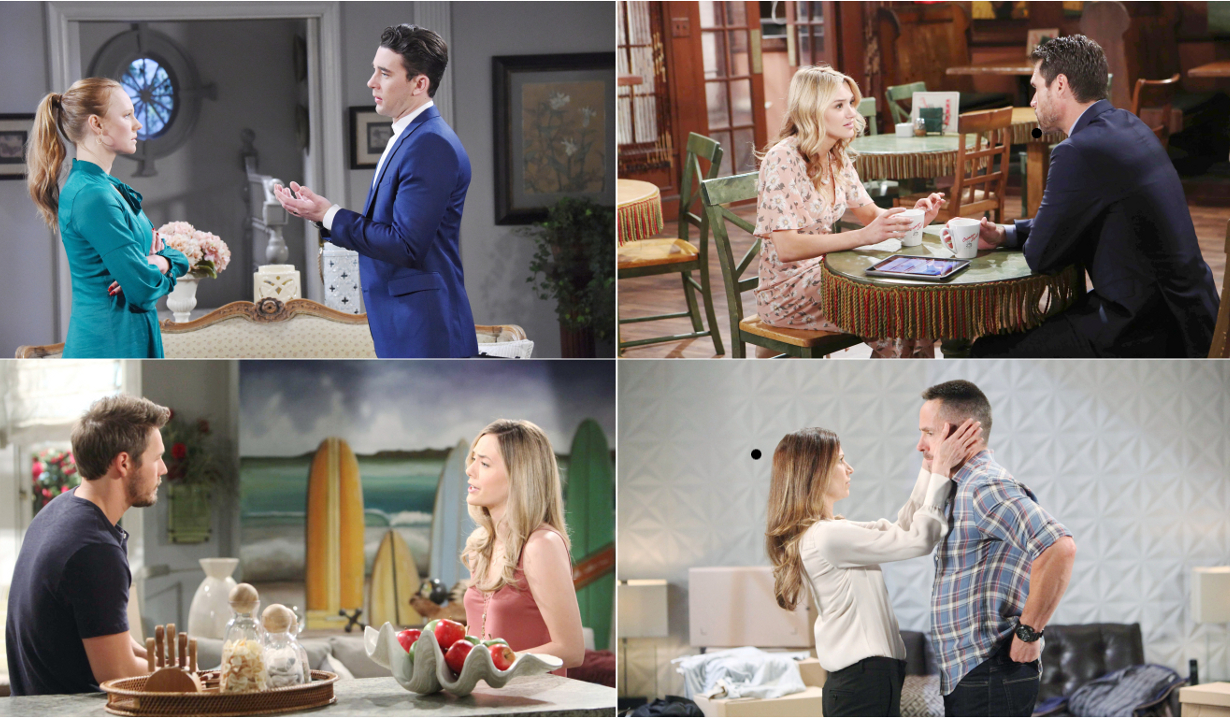 Find something to look forward to this week with Soaps.com’s spoilers for The Bold and the Beautiful, Days of our Lives, General Hospital, and The Young and the Restless.

Liam is perplexed and thrown for a loop when Steffy beats him to the punch. She makes an overture to Hope that he should have. Making things even more awkward, Hope opens up to Liam about the fear that she is feeling. Pretty soon, he’s having another confrontation with Bill. They fight about Steffy and Kelly until Bill starts issuing a mix of apologies and threats. But whatever happens between father and son could be rendered irrelevant after Steffy drops a bombshell. Check out Soaps.com’s The Bold and the Beautiful spoilers to learn who has a confrontation with Thorne.

Secrets are being kept under-wraps in Salem, but at what cost? Victor agrees to keep his mouth shut about what Eve is hiding from Brady, but silence from the king of snide remarks doesn’t come for free. Meanwhile, Steve tells John about what he suspects Kayla is keeping from him. Mr. Black advises him to call Kayla out about it. And things are getting tense over at Casa DiMera. Chad and Abby feel her baby kicking for the first time, but that doesn’t seem to be enough to keep him by her side. He walks out on her as Stefan makes it clear that he wants to be part of his child’s life and Gabi makes it clear to Chad that she plans to be part of his life. Trying to get his life back on track, Ben asks Marlena to hypnotize him so that he can get the proof he needs to show he’s innocent. As Hope tries prodding the shrink to commit Ben, Tripp does what he can to turn Ciara against the troubled Mr. Weston. Read the Days of our Lives spoilers to see who reunites.

Sonny’s curiosity is raised but his hopes don’t pan out as well as he expected. Jason makes it clear that he has some serious doubts about the scheme that he’s in the middle of. He may also have some different but no less serious questions after an unusual meeting with Margaux. No doubt complicating things, Drew makes a grand gesture, but will it fall flat? Ava’s feeling inspired by Julian’s recent gestures and he’s acting more grateful than usual. But things aren’t running smoothly in Ava’s life. Nelle is still flapping her gums and sticking it to the people around her. Worrying about Kiki’s case, Ava starts to put more pressure on Scott to get the result she wants. And Franco manages to make things worse and that leaves Liz feeling ambivalent. Take a look at our General Hospital spoilers to find out who Finn refuses to help.

Summer continues to pour all of her energy into wooing Billy but that might not be the only thing that gets him into trouble. Billy’s secret project starts to leak to the surface and it could have some consequences. Meanwhile, Victor’s new project isn’t moving along quite as fast as he wanted and he asks Nate for some help. He also tries to call a truce when it looks like things may be getting out of hand. Across Genoa City, things are already out of whack as Lauren startles Jack and he decides it’s time to make a risky move. Finally, with all of the heartbreak in his family lately, Neil could use some comforting and he gets it thanks to Ashley. Visit The Young and the Restless spoilers to discover whose actions shock their family.