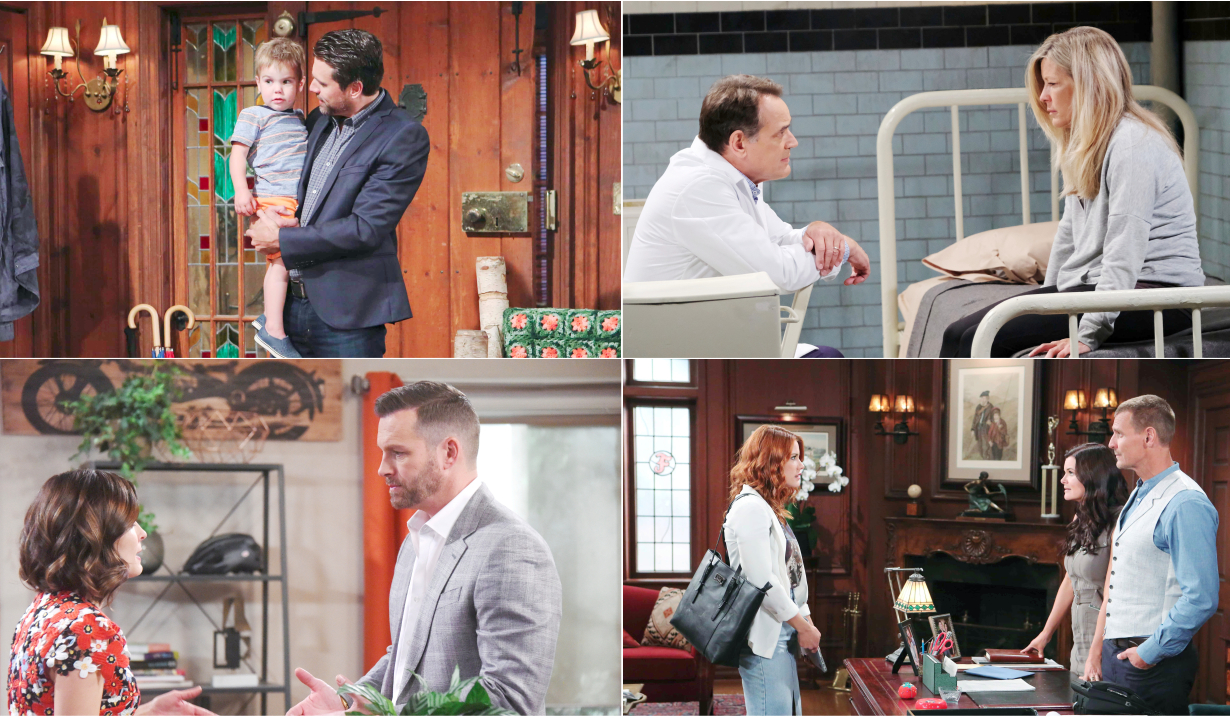 When facing another scandal, Sally tries to shield herself from blame by insisting that she’s being framed. This quickly leads to her getting into an altercation with Zoe. Luckily, Wyatt manages to get between them before things go too far. Zoe still manages to ruin someone else’s week. After Xander reminds her that she’s not his girlfriend, she reveals his secret identity. Meanwhile, Brook tries to convince Liam that he’d be better off with Hope than trying again with Steffy. Bill would certainly agree with that. He’s thrilled to discover that Hope is pregnant and instantly starts to use this in his plan to get Steffy back. This soon leaks into the Hope for the Future relaunch. Although the event will feature Thorne’s designs and Emma’s choreography, it’s likely to be something very different that everyone remembers. Will Justin be able to go through with what Bill has ordered him to do at the event? Check out Soaps.com’s The Bold and the Beautiful spoilers to learn who is forced to confront their past.

Trying to do the noble thing, JJ may regret it when he agrees to take the fall for Theresa’s sake. No doubt making a bad situation worse, Jenn soon throws herself into the middle of the mess as she tries to discover how drugs wound up in her son’s apartment. Meanwhile, Brady and Theresa make their final bids to win custody of Tate, but it looks like Brady will have to bid farewell to his son. This only angers Victor and he soon makes sure that Theresa is facing some rotten news of her own and will have to ship out of Salem. Abigail has plenty of baby problems as well and tells Gabi who the father is, though she is a lot more reluctant to tell Chad. Gabi runs off to rant at Stefan for how he treated Gabby and the truth about Abby’s pregnancy soon leaps out of her lips. In the midst of all the baby chaos, Hope and Rafe keep themselves busy by trying to force Ben to make a confession. Read the Days of our Lives spoilers to see what shocks Will.

Things continue to be fraught for the Corinthos clan as Michael’s wedding to Nelle looms large on the immediate horizon. Michael is starting to feel ambivalent about the path that he has taken. Sonny is annoyed by the situation, and every other situation that he’s stuck in. This may only get worse when Julian pays him an unexpected visit. As Sonny’s problems worsen, so do Carly’s. She is going to have to face some punishment for what she did in Ferncliff. The week gets bleaker when Diane announces that she has some bad news. The misery is thick around Port Charles. Maxie can sniff out that something is seriously wrong and Valentin manages to figure out what’s been happening under his nose. Nina keeps trying to avoid facing the truth and this only makes Valentin more desperate. Complicating thing, Obrecht is starting to lose emotional control and her hold on the situation become loose. Take a look at our General Hospital spoilers to find out why Curtis needs to explain something to Liz.

After weeks of him trying to keep it from her, Phyllis finally finds out what Billy has been hiding. But it looks like he’ll still be facing less of a threat than half of Genoa City next week. Victor’s battle with back-from-the-dead JT escalates to an uncomfortable place. The mustache prepares a multi-front war to keep his hold on what he’s got, but this may also mean playing dirty against Nick again. Sharon can’t help but shudder in fear when she sees Nick’s dark side come out. Meanwhile, Nikki and Victoria are shocked by what comes at them next. Once again, Abby has a hard time choosing sides amidst all the chaos but Ashley already has a cunning plan for who she wants to cut a deal with. Across town, Jack finally gets the paternity news that he needed and doesn’t waste time using it to play hardball to get what he thinks he deserves. And Hilary tries to hide a secret, but doesn’t do it very well. She and Lily are soon in a brutal argument and, not long after, Devon receives some bad news. Visit The Young and the Restless spoilers to discover who Mariah gets close to.

Famous Actors Who Started Out on...

At Home With Olivia Culpo: How Running & Cooking Are Helping Her Survive Being Self-Isolated

More Screen Time During Lockdown? Not for These Kids Cable Channels