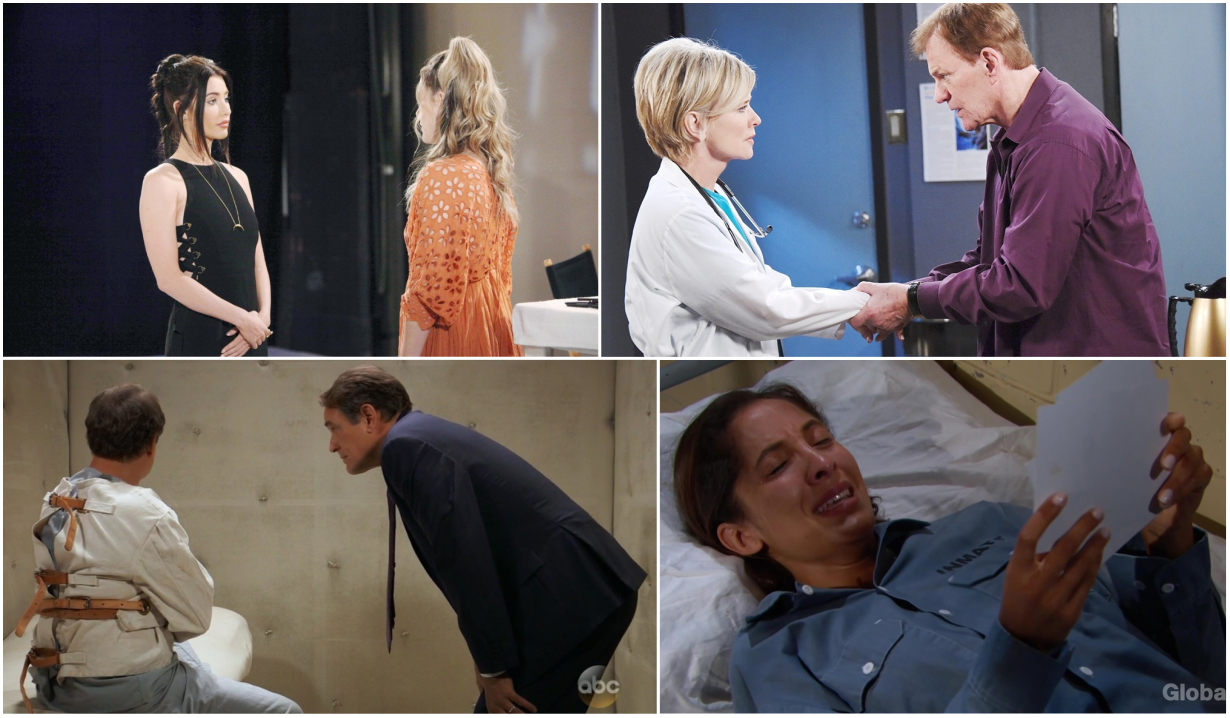 Soaps.com is back again with the highlights from last week’s Bold and the Beautiful, Days of our Lives, General Hospital and Young and the Restless episodes with a teaser into the next week for each.

First on The Bold and the Beautiful, a pregnancy scare for Hope brought her and Steffy closer and they agreed to raise their children to love one another, but once Ridge announced that Forrester could only support either Steffy or Hope’s fashion lines that goodwill went out the door. Steffy asked Hope to back out because she’d already won Liam. Meanwhile Bill turned to Brooke about his custody battle with Katie over Will, and she agreed to talk to her sister. Coming up: Thorne proposes to Katie.

Over on Days of our Lives, Steve was arrested on charges of espionage, but Kayla quickly realized it was his bionic eye that was recording top secret information. Paul was left in critical condition after a tumble out a window with Kristen DiMera, who naturally escaped without a scratch, only to awaken to Will admitting he got his memory back and remembers loving Sonny. And Marlena’s conditioned worsened after being shot at her wedding and she wound up on life-support. Coming up: Marlena’s loved ones say goodbye as they prepare to take her off life-support.

And on General Hospital, in Ferncliff serial killer and psychiatric patient Ryan Chamberlain attacked and switched places with his twin Dr. Kevin Collins. A seizure landed Oscar in the hospital, and Kim admitted to Drew their son was dying of the old inoperable soap opera brain tumor, and Oscar was unaware of it. Nina received a clue from her mother’s estate that led her to believe the child she thought she lost may be alive. And Mike was determined to keep the secret of the body buried under Julian’s pub safe. Coming up: Julian’s pub explodes!

Finally, on The Young and the Restless, even though Devon asked for leniency for Lily, a judge sentenced her to a year in prison for Hilary’s accidental death. Sharon remained suspicious of the returned Tessa, who claimed she needed 20 grand to help out her sister Crystal. After another scare with Dina, Jack decided to move back into the Abbott mansion, and was determined to locate his father. And Billy admitted his gambling to Phyllis, who had reservations that he had it under control. Coming up: Rey arrests Nick for JT’s murder.