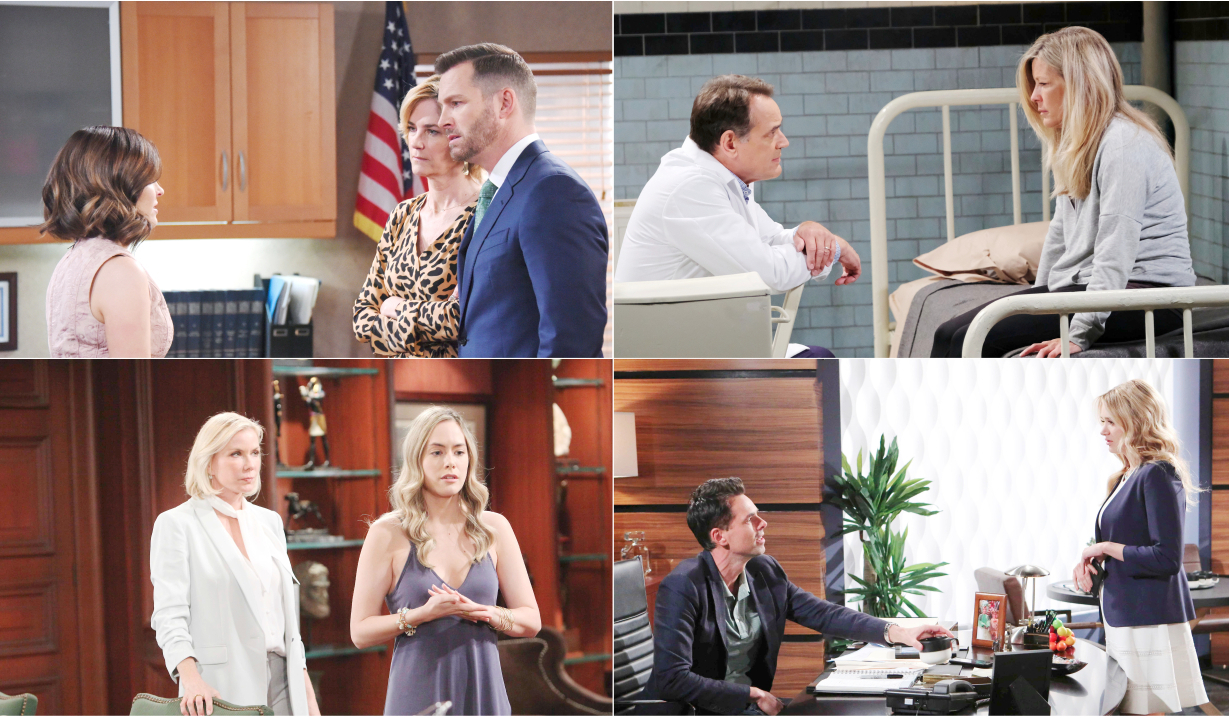 Soaps.com serves up the freshest spoilers for The Bold and the Beautiful, Days of our Lives, General Hospital, and The Young and the Restless.

Emma gets to know Xander better as he confides in her. But this new intimacy isn’t quite so confidential since Zoe is watching them get close. She also manages to be in prime listening position to hear Sally telling Wyatt about the warning she received from Hope. Wyatt is soon distracted when the perpetually confused Liam comes looking for advice. However, Katie and Thorne are so worried about Hope receiving threatening messages that they hire some help to find the culprit, even though they are pretty sure Sally is to blame. Meanwhile, Hope is more worried about how she is going to beat Steffy in her battle for Liam. Check out Soaps.com’s The Bold and the Beautiful spoilers to learn who leaks the truth about Hope to Bill.

Ciara blacks out in the blaze at the cabin, only to come to after being rescued by her mom. Hope wants some answers about what happened, but her daughter doesn’t seem to have them. Although she was nearly burnt to a crisp, she’s in less pain than Gabi is. She gets rushed to the hospital, where Kayla delivers some terrible news as Abby waits for potentially unsettling news from the paternity test. Across Salem, things are getting increasingly tense for Brady. Victor throws his support behind Eve in the bid to help him in the custody battle against Theresa. But the scheming may come to naught after JJ makes an announcement at the hearing that leaves everyone shocked. Read the Days of our Lives spoilers to see who things are heating up for.

While trying to keep control of his fraught situation, Michael makes apologies. Nelle, however, is edgier than usual especially after her scheme suffers from another setback. Over in Ferncliff, Carly finally opens up more to Kevin but becomes distressed when the doctor isn’t around when she needs him. Back out in the woods, Peter continues making every promise he can in a bid to get free. He could be in luck since something is distracting Obrecht and Nina is busy fighting with Valentin. She lectures him but the Cassadine notices that something is seriously off with her and starts to dig into what it is. In a strange turn of events, Jordan decides to ask Stella for advice and Ava is disturbed by Oscar. Take a look at our General Hospital spoilers to find out what has Franco curious.

Jill returns to Genoa City, but she may wish she had stayed away. Everything seems to be in chaos since Jack started digging for the truth about his paternity. While he argues with Jill over his possible place in the Chancellor family, Kyle literally starts digging up Phillip’s grave, which could cause more than a little trouble. Across town, Nikki and Sharon continue to spiral out of control. Nick tries to bottle it up as he and Sharon look forward to the future together. Meanwhile, Billy’s already complicated life gets entangled even more with Summer as he has to bail her out again. And Victor prepares for a fight after he receives a disturbing message. Visit The Young and the Restless spoilers to discover who Hilary helps.