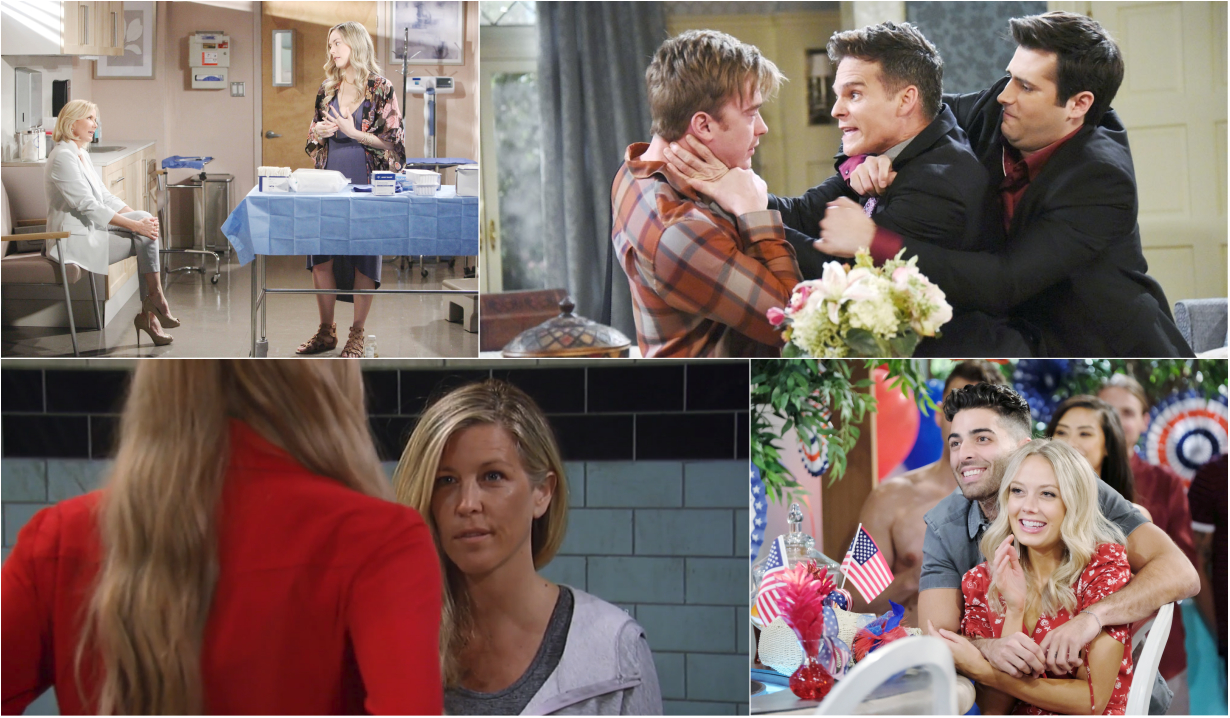 More baby news, hiding a dead body, a visit from the Colonel, and digging up a grave.

Soaps.com has a rundown of what took place in last week’s Bold and the Beautiful, Days of our Lives, General Hospital and Young and the Restless storylines.

Last week on The Bold and the Beautiful, Dollar Bill realized he was hurting Steffy, promised not reveal Taylor shot him, and that he would let her marry Liam if that was her choice. Meanwhile, Hope confirmed with a doctor that she is pregnant with Liam’s child, and Brooke pushed her not to give up on a future with Liam. Liam and Thorne looked into threats on Hope’s website, and Thorne learned both Maya and Emma were holding grudges over Hope not using them as models. As fireworks exploded on the Fourth of July, Hope told Liam about the baby. He vowed they’d make it work, and later returned home to break the news to Steffy. Shockingly, Steffy believed they could handle this, as long as they were married. Coming up: Sally is suspected of the threats against Hope.

Over on Days of our Lives, when Will exposed Leo as a prostitute named Matthew, Leo attacked Will. During the fight, Sonny pulled Leo off Will and Leo accidentally hit his head on the fireplace mantle and was killed instantly. Sonny and Will teamed up to hide the body, Hope and Rafe style. Abby and Gabi worked to acquire DNA samples from Chad and Stefan in order to figure out who the father of her baby was. In court, Brady and Theresa fought for custody of their son Tate. They exposed every dirty secret from each other’s pasts, and Theresa’s lawyer subtly hinted that Brady killed Deimos Kiriakis. And at the cabin, Ben became increasingly unhinged without his medications, and after Ciara finally convinced him to leave to refill them, a fire broke out. Coming up: Eve urges Brady to admit Nicole killed Deimos.

On General Hospital, Chase and Jordan proposed a plan to trap Nelle. Later, Michael suggested to Nelle that they marry immediately. Sonny was stunned to learn Mike reburied the body from Croton in the foundation of what’s now Julian’s pub. Scott warned Alexis and Kiki that Bensch had a photo of Kiki and Griffin hugging but later discovered the more explosive secret that Griffin and Kiki had drunken sex. A scout named Wyatt discovered Peter strapped to the bed in the cabin in the woods but told no one out of fear nobody would believe him. And Maxie and Lulu were paid a visit by KFC’s Colonel Sanders, (played by George Hamilton), who is an old friend of Maxie’s, and asked her to hide his secret recipe because a crime syndicate was after it. Um, but isn’t the secret recipe all over the net? Coming up: Wyatt tells Finn and Franco about Peter.

Finally on The Young and the Restless, Phyllis suggested the ladies dig up JT’s grave, but they discovered a huge piece of art had been placed above it by Jill. Neil brought his godson Dr. Nate Hastings Jr. to town treat Victor’s mysterious ailment. Things got worse for Victor when a news story suggested he had something to do with JT’s disappearance. Ashley, seeking to protect herself, quit Newman and rejoined Jabot as COO. Jack dropped the lawsuit to exhume Phillip Chancellor’s body when he realized Dina was too fragile to take the stand. Later, Kyle considered digging up Phillip’s grave for answers. Billy succumbed to his gambling addiction and lost the company yacht, Jaboat. And the week ended with Nikki and Sharon screaming after spotting JT in a hoodie lurking outside of Sharon’s place. Coming up: Kyle’s arrested digging up Phillip’s grave.

Famous Actors Who Started Out on...

Siren Returns for Season 3: Eline Powell 'Welled Up' When She Saw Ryn's Baby