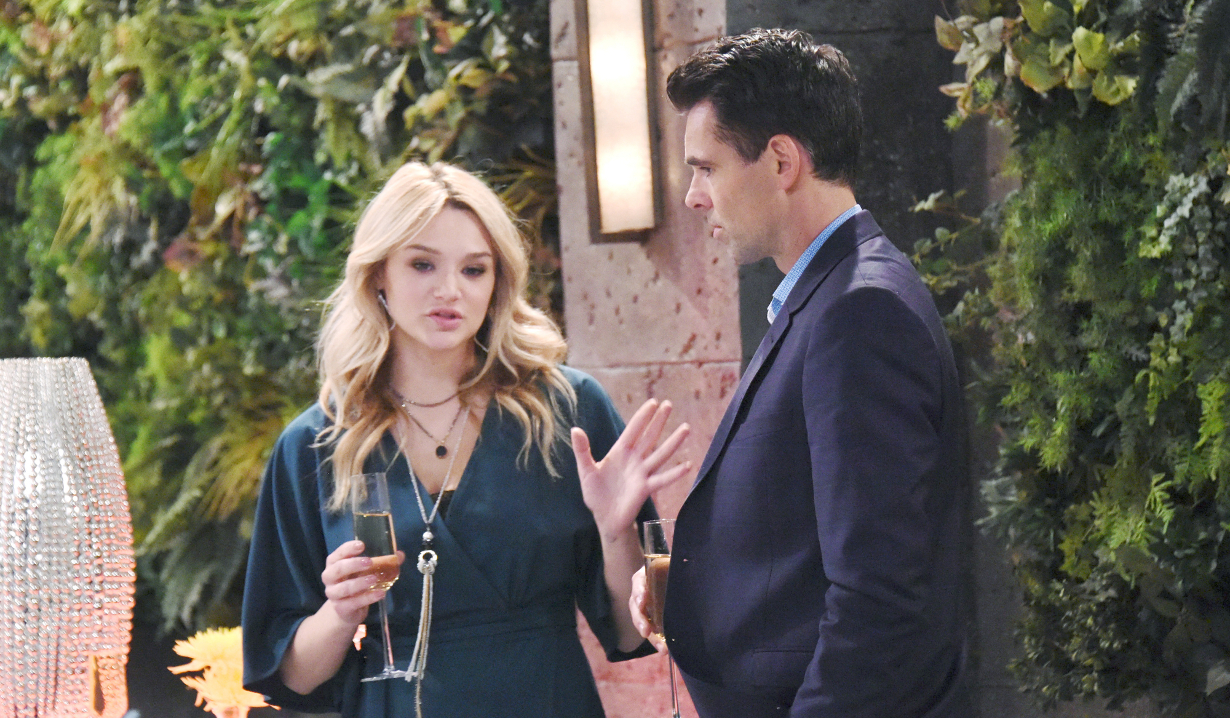 Soaps.com serves up the latest delectable spoilers for The Bold and the Beautiful, Days of our Lives, General Hospital, and The Young and the Restless.

The Bold and the Beautiful:
Steffy has to work hard to convince Liam that they should not be getting married. But Liam is about as good at listening to people as his father is. Bill is treated to a lecture from Brooke, but brushes it off to rush over to Steffy so he can explain that all the nasty things he does, he does for her. She’s shocked, but not as shocked as Katie is after she discovers that Wyatt has been having sex with Sally. And that’s not the only bed Ms. Spectra has gotten into. Eric wants her to leap into the Hope for the Future line, much to the chagrin of Hope. While Sally and Hope battle it out, Eric and Ridge fight over the same thing. Sally is pleased, however, when she finds Wyatt defending her to the Forresters. Check out Soaps.com’s The Bold and the Beautiful spoilers to learn who helps Emma when she’s accused of something.

Days of our Lives:
Abigail has something new to fear. She’s worried that she might be pregnant, but she’s not sure which of her former personalities got pregnant with which man. She admits all of this to Gabi, who has other fish to fry. She rails at Stefan for framing her for murder. No sooner has he recovered from that then Chad shows up to warn him to stay away from Abigail. Finally, Kayla shows up and Stefan demands that she give him proof supporting her theory about Kate. Across Salem, Leo is desperate to find Sonny, who is equally desperate to get some dirt on him. The Kiriakis is surprised when Leo has a proposal for him. Meanwhile, Will confesses to Paul that he’s had a memory of his past with Sonny. Pretty soon, Paul is telling him that he loves him. And Ben and Ciara continue to bond. Read the Days of our Lives spoilers to see who defends Theresa when Brady and Eve blast her over custody for Tate.

General Hospital:
Jason is edgy after the most recent events. But he has some reasons to be optimistic thanks to a breakthrough with a little help from Spinelli. Sam also throws some help their way. Things could be looking up for Carly. The latest surprise she encounters in Ferncliff leaves her curious rather than terrified. Meanwhile, Lucy is concerned about Kevin and the trouble that he could be landing himself in. Sonny could also get dropped into some trouble when he’s interrupted. Joss tries to keep someone out of trouble by telling a little lie. And Valentin is still in trouble with Nina. His latest bid to win her over flunks and she’s furious about this and other things. Someone is not pleased with Michael either and he finds himself on the receiving end of a warning. In response to a very different warning, Chase is forced to make a promise. And Ava weighs up the alternatives to her situation while Scott gets an offer he might not be able to turn down. Take a look at our General Hospital spoilers to find out who learns the truth in Port Charles.

The Young and the Restless:
Jack has to get strategic as he digs for the truth of his paternity. Doing so also seems to mean digging himself in deeper in a battle with Cane over information about the Chancellors. Kyle is getting less defensive though and starts opening up more to Summer. Unfortunately for him, she’s a lot more interested in opening up to Billy and continues to tease and taunt her mother’s boyfriend. Across Genoa City, Abby has some serious question for Arturo as the Newman clan bands together to fight whoever is coming after them. It’s going to take a lot of hard work for Victor and Nikki to preserve the family image, especially with Nick and Sharon battling them over Christian’s custody. And Victoria teams up with Ashley to deal with her problems, but that won’t be enough to prevent her life being thrown into chaos. Visit The Young and the Restless spoilers to discover who is stuck doing damage control.