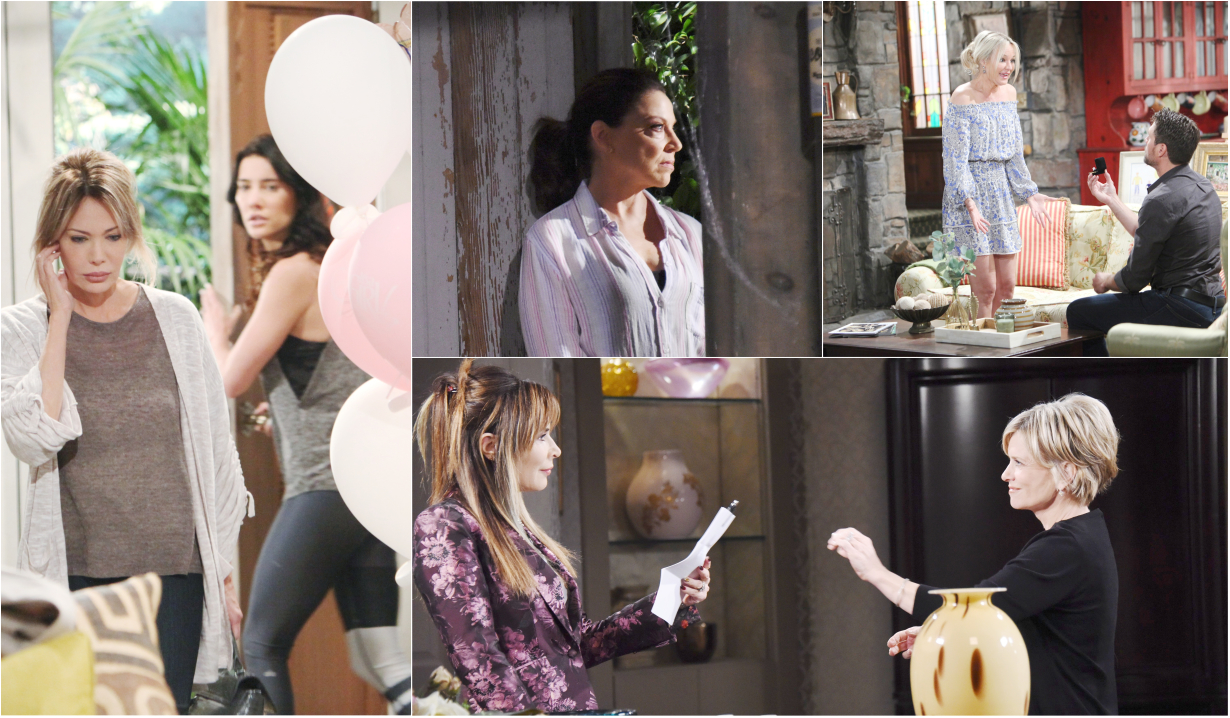 Missed any of last week’s soap opera episodes? Soaps.com has highlights of what went down on Bold and the Beautiful, Days of our Lives, General Hospital and Young and the Restless.

Bold and the Beautiful:
Last week on The Bold and the Beautiful, a drunk Sally shot up a photo of Bill at Wyatt’s place, and when things cooled down, she and Wyatt connected over how Bill had ruined their lives. Maya figured out Emma was related to Bill’s right-hand man Justin Barber and fired her. Emma and Justin swore they only kept their relationship a secret so it didn’t hurt Emma’s chances at a career in fashion. Hope decided to give her a second chance but warned her she didn’t trust people associated with Bill. As news of Liam and Steffy’s engagement spread, Bill warned Steffy that if she married Liam he’d send Taylor to prison for shooting him. Liam surprised Steffy with a fast-tracked wedding but was suspicious when Steffy seemed to put on the brakes. Coming up: Wyatt and Sally have sex.

Days of our Lives:
On Days of our Lives, Lani was rushed to the hospital after cramping, and sadly lost her baby boy. After being injected with Rolf’s serum, Will had a flash of memory, and later stole the serum from the hospital after learning they would no longer give it to him. Chad proposed to Victor and Sonny that he run Titan, since nobody else was able or willing to. However, he was stunned when Kate confessed she was behind the lawsuit against Sonny to secure both their futures at Titan. Chad chose to keep the lie and screw over his best friend, embracing the DiMera way. At the cabin, Ben acquired a burner phone, which Ciara used to let her mother Hope know she was okay, but not where she was. Coming up: Abigail returns and is pregnant, but unsure who the father is.

General Hospital:
Over on General Hospital, Nelle claimed to Michael that Chase had stalked her from Maine to Florida, and now to Port Charles. However, Michael discovered the gifts Nelle claimed to have received from Chase were ones she sent herself. Kevin was alarmed to find Jason working as a janitor in Ferncliff and told him to quit immediately. Carly naturally asked Jason not to leave her. Mike couldn’t recall a prior conversation with Sonny about relocating the body Sonny disposed of in Croton but did remember he knew pub owner Charlie Delaney back in the day. Alexis convinced Julian to attend therapy with her, where things got tense as they opened up about their past. And Kiki feared her case against Dr. Bensch was falling apart until another nurse came forward and admitted Bensch had harassed her. Coming up: Michael makes a move to trap Nelle.

Young and the Restless:
Finally on The Young and the Restless, Jack discovered an old photo of Dina with Phillip Chancellor. With all the blood Chancellors off hiking the Himalayas, Jack decided to exhume Phillip’s body for a DNA test to see if he was his father. With Phyllis out of town, Summer arranged a poker game at home, and Billy gave into temptations. He later swore Summer to secrecy about the game. Victoria received shocking emails that her secrets were not safe, and later boxes of private Newman documents appeared on her desk. Mac revealed that JT’s credit cards were being used across the Midwest, including to ship several boxes. Brittany counseled Nick to break things off with Sharon in order to get Christian back, but instead Nick proposed. Later, Nick threw a party to announce the engagement, which Victor crashed. Coming up: Jack learns Phillip Chancellor is his father.