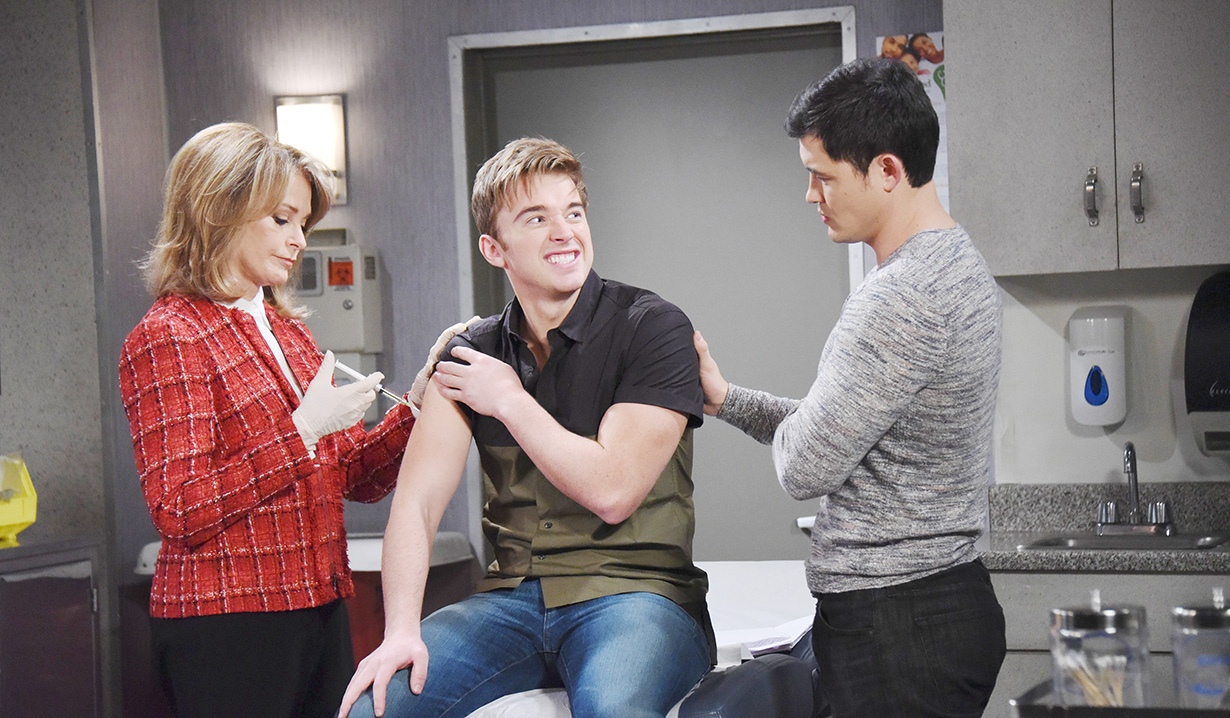 Liam proposed to Steffy, Ben cared for Ciara after her motorcycle accident, Carly was sent to Ferncliff, and Jack was closer to finding his real father…

Soaps.com is giving our readers a refresher of what happened last week on Bold and the Beautiful, Days of our Lives, General Hospital and Young and the Restless.

Last week on The Bold and the Beautiful, Maya’s cousin Xander from Britain began working at Forrester as an intern, where fellow intern Emma kept secret that she was Justin Barber’s niece. Liam proposed to Steffy, who accepted. He is just popping these proposals out left and right these days. After being dumped by Katie yet again, Wyatt ran into a drunk Sally Spectra, who had returned after being dumped herself by Thomas. They went back to his place where she pulled a gun on him and fired. Coming up: Bill meddles in Steffy and Liam’s relationship again.

On Days of our Lives, Theresa tried to tempt Brady away from Eve by offering him back Bella Magazine, but Eve landed her and Brady a job at Gabi Chic. Sonny was elated to learn his ex-husband Will could regain his memories, though it was through using an experimental serum developed by Dr. Rolf. Ciara was stunned to wake up in a cabin after crashing her motorcycle and find “reformed serial killer” Ben Weston taking care of her. And during a tense discussion with JJ, pregnant Lani began cramping. Coming up: Ben recalls a disturbing childhood memory.

And on General Hospital, Carly was hauled off to Ferncliff, where Jason got a job as a janitor to watch over her. Mike confessed to Sonny that he moved the body that Sonny disposed of for his boss decades ago in Croton. Whether he remembers what he did with it is a whole other question. Kiki warned Dr. Bensch she was filing a lawsuit against him for sexual harassment. And Nelle was stunned to run into Chase, who was the detective in charge of investigating her former fiancé’s death in Florida. Coming up: Nelle reflects on her past.

Finally on The Young and the Restless, Hilary and Devon had a romantic night together and officially decided to share a bedroom. Brittany Hodges represented Nick in the custody case for Christian against Victor, but due to Sharon’s past, Victor gained temporary custody. Nick vowed to take everything from his father. And Neil gave Jack a box of Dina’s old diaries which held clues to Jack’s father’s identity just in time for Father’s Day. Coming up: Brittany questions Victoria about JT.

Jordan Matthew Young: 5 Things To Know About The Dreamy Singer On ‘The Voice’