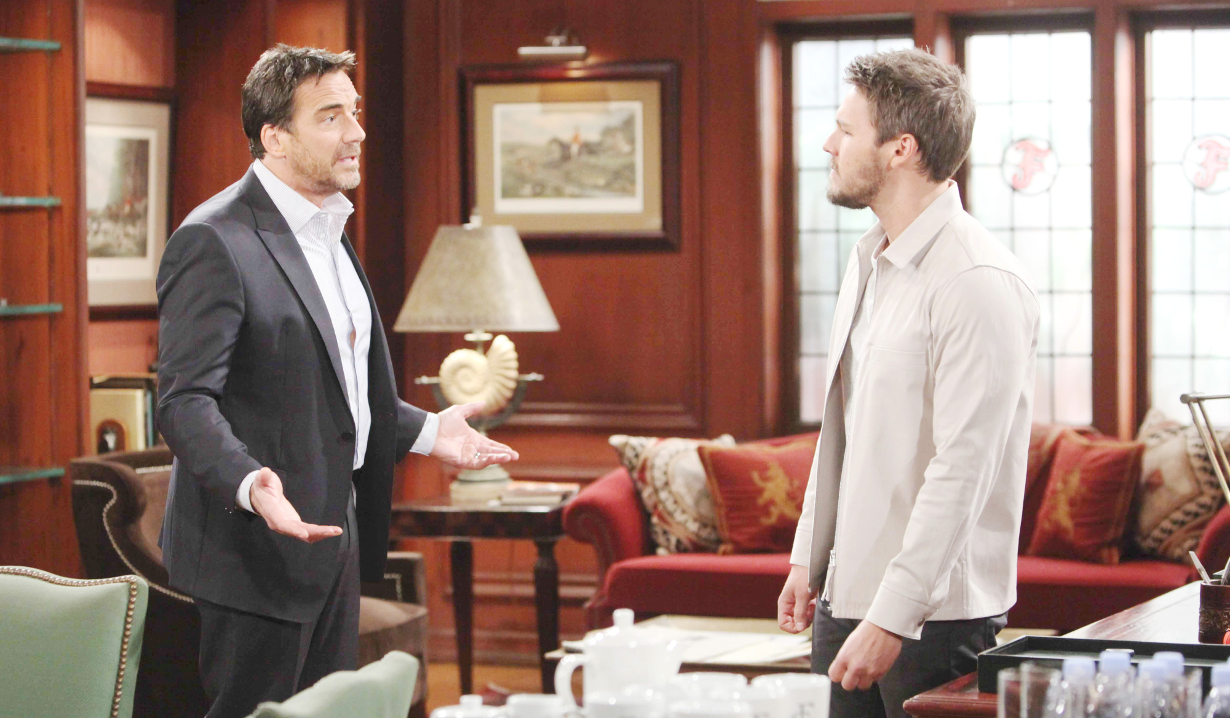 The Bold and the Beautiful:
Katie starts to think that she spoke too hastily to Wyatt and regrets what she suggested he do. But will her regrets be enough to woo him away from Bill’s latest offer? Wyatt has a hard time keeping everything he knows in his head, but Katie does her best to keep his mouth shut. Meanwhile, Bill is also busy manipulating Liam, but that probably has less impact on the young man than learning what Steffy plans to name their child. However, Liam’s life could be upset by Ridge, who decides to tell Hope that Liam is marrying her based on lies. This forces Brooke to do some damage control and she calls in her sisters for help. As Carter arrives to start the wedding ceremony, Steffy and Taylor are busy blaming different people for how all of this has gone down. Check out Soaps.com’s The Bold and the Beautiful spoilers to learn who reminds Bill of something.

Days of our Lives:
Stefan tries to keep his head above water, but that means getting threatening. One of the only tricks he has left is to use Chad’s freedom as leverage with Abby. While she ponders that, Chad is busy trying to convince Melinda cut a plea bargain for Abby. But will that be enough when she has to face up to charges in Andre’s murder? Abby isn’t the only one facing fallout over bloodshed. Kate discovers what her future holds thanks to her part in Vivian’s demise. And Sonny realizes another of his relationships is set for the chopping block after he discovers what Leo has really been doing all this time. Trapped in a very different predicament, Brady is stunned when he gets home and finds Theresa waiting for him, wanting to start up their relationship again. This is even more stunning for Eve when she walks in on it and her sister tries to convince her to split with Brady. Read the Days of our Lives spoilers to see what problems arise when a judge overturns someone’s conviction.

General Hospital:
Anna’s nerves continue to get the better of her while Finn goes looking for answers to some questions that have been nagging him. Complicating things, Alexis does something that she soon regrets. Across Port Charles, Valentin tries to avoid disaster, but he is walking a fine line to do it. That isn’t enough to stop Peter from feeling deceived, but it’s Lulu that Valentin crosses. This is all starting to be too much for Dante, especially after Nina pays Lulu a visit and Valentin does his best to control the situation. Meanwhile, things are still panning out the way Nelle was hoping, and this leaves Carly feeling tortured and Sonny feeling tormented. Take a look at our General Hospital spoilers to find out what Lucy is apologizing for this time.

The Young and the Restless:
Shawna is back and creating some friction for Hilary and Devon. Dina creates even more friction for the Abbotts and anyone who comes into their orbit with her latest revelation. All the upset has Jack sinking into addiction while battling for control with Billy. This gets ugly very fast and Billy has the upper-hand. However, all his scheming has only managed to mess up Kyle’s life. Across Genoa City, Nick finds himself on the end of a surprising offer and he turns to Phyllis for some much-needed advice. He should probably be keeping a closer eye on Sharon, whose attempt to manipulate Nikki doesn’t work out the way she was hoping. Will things work out for Abby as she starts a new, risky project with Arturo? And whose lives will Ashley’s secret agenda disrupt when it is revealed? Visit The Young and the Restless spoilers to discover where the sparks are flying.