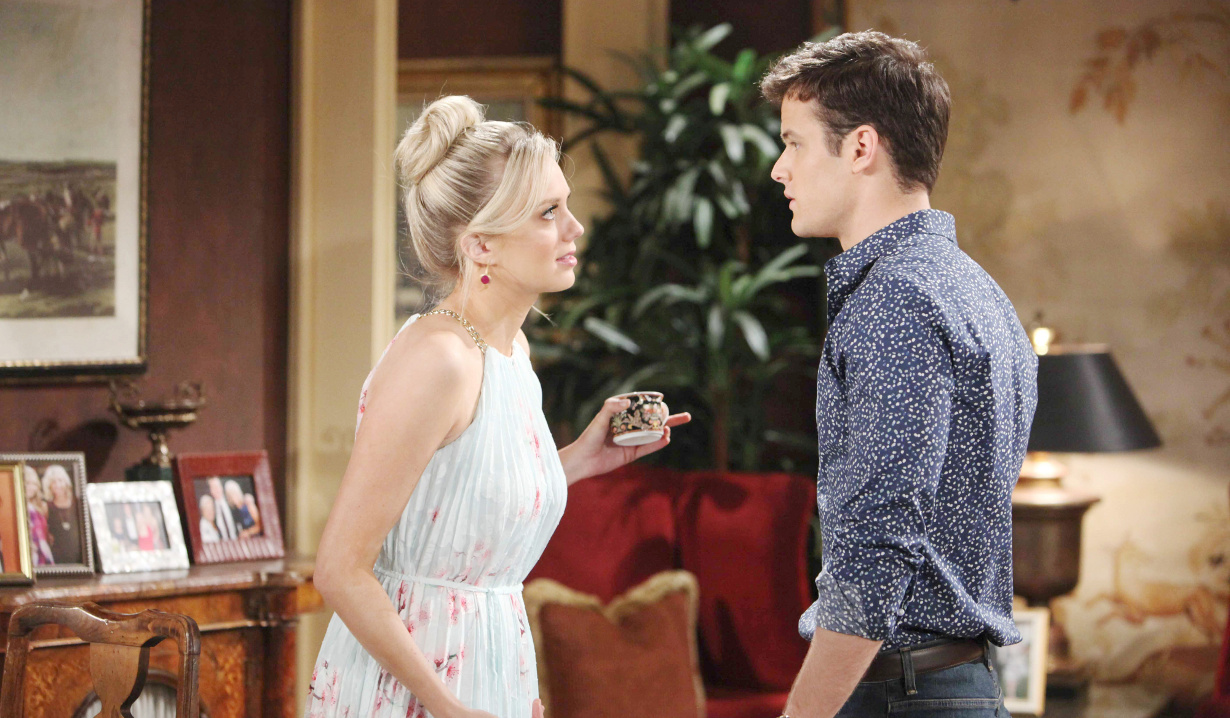 The Bold and the Beautiful:
After realizing that his father has been using him yet again, Wyatt confronts Bill and gets threatening. While that’s unlikely to get through to Dollar Bill, will Ridge have any more luck trying to convince Brooke that Bill was behind Steffy’s split with Liam? Apparently not, since she’s soon brawling with Taylor when the blonde shows no sympathy for Steffy. Ridge runs off to try and persuade Liam that he’s being manipulated while Wyatt is stunned when Katie kiboshes his plan to come clean with his brother. She urges him to make a deal with his dad instead while Bill optimistically looks forward to a future with Steffy. Check out Soaps.com’s The Bold and the Beautiful spoilers to learn who else questions Bill about his actions.

Days of our Lives:
Victor remains opposed to Brady’s plans to tie the knot with Eve. But will the offer that Victor makes him be enough to woo Brady away from walking down the aisle? Or maybe the fact that Eve has an unanticipated encounter with her old flame JJ will do the trick? Meanwhile, desperate to get out of her situation, Theresa strikes a deal that she may wind up regretting. Sonny may also be destined for some serious regrets. Leo has a new boss and pushes him to drag Sonny deeper into his scheme. Across Salem, Abigail seems to be digger herself deeper into trouble. After she ignores Justin’s legal advice, things continue to go downhill as Gabi accidentally makes Abby’s life worse. Soon, Chad and Stefan are getting violent with each other, but that may not be as violent as Abby gets with Stefan. Read the Days of our Lives spoilers to see who makes a decision about their future.

General Hospital:
Things continue to go swell for Nelle, which is more than you can say for almost everyone else. Nelle’s good fortune could spell doom for Carly, which also means that things aren’t going well for Sonny. The dimpled don isn’t sure what to do with himself. This is positive news for Ava, who manages to gain even more control and she tries to bring Griffin closer again. Meanwhile, Michael and Dante decide it’s time to tie one on and do some brotherly bonding as they get drunk. This is more than can be said for Chase’s ongoing problems with his brother. Things aren’t looking up for Curtis either. His nerves have him on edge and could bungle something for him. Aunt Stella tries to look at the bright side, but soon discovers that what she’s looking at is horrifying. Take a look at our General Hospital spoilers to find out who connects.

The Young and the Restless:
With the Abbott family in chaos thanks to the latest paternity revelation, Abby hunts around, trying to get to the bottom of who tampered with Dina’s movie and sent Jack into a downward spiral. Billy attempts to be heroic in the midst of the mess as Jack disappears. And speaking of disappearances… Nick still wants to know what happened to JT. Sharon continues trying to keep him off the scent, but by the end of the week the friends with benefits need to make a major decision. Across Genoa City, Paul grills Victoria and Neil tries to help a friend in need. Visit The Young and the Restless spoilers to learn who saves the day.