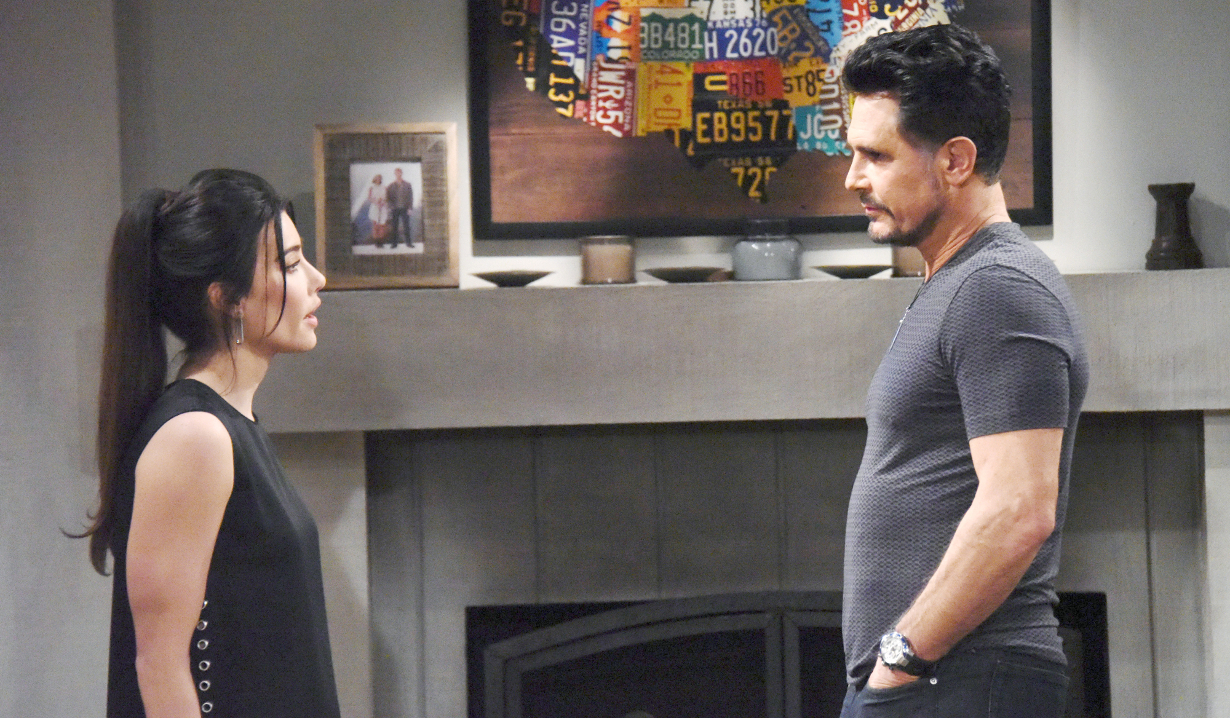 Some remain stuck while others are pushed too far.

The Bold and the Beautiful:
With his head turned for the moment, Liam also manages to drop on his knee and pop the question to Hope. He’s lucky, because she’s in the giving mood. Feeling much less generous is Steffy, especially with Bill continually trying to wriggle his way back into her life. She enlists Wyatt to keep Liam at bay while Ridge tells her about his suspicions. The paranoia starts to escalate when Hope and Liam announce that they are engaged. Steffy can’t manage to feel congratulatory and lashes out instead while Brooke, Maya, and Rick eavesdrop on her nasty argument with Hope. Steffy doesn’t waste any time and runs off to try to convince Liam he is making a heinous mistake. Check out Soaps.com’s The Bold and the Beautiful spoilers to learn who confronts Bill with their suspicions.

Days of our Lives:
Abigail manages to regain enough control of her body to get back with Chad. Unfortunately, he’s keen to use her lucidity to help her remember killing Andre. Forced to face that, it’s not long before her alternative personalities possess her body again. Meanwhile, Kate seems possessed during her battle with Vivian over DiMera. Vivian is sent to the hospital, facing possible death while Kate copes with questions from the cops. Elsewhere in Salem, Brady faces a medical crisis of his own while Chloe and Theresa remain trapped in Mexico. The diva fills her in about Brady’s relationship with Eve while Victor looks for a way to keep the truth about Theresa being pushed out of town a secret. Read the Days of our Lives spoilers to learn why Sonny explodes at Paul.

General Hospital:
Though Carly clearly has some serious problems of her own, she attempts to help when things are going south for Josslyn. However, this only manages to compound her problems and Joss starts to beg her for some understanding. Meanwhile, Ava is pleased as punch with how things have been panning out. Nonetheless, Nelle manages to ruin her mood when she makes it clear what she has planned. Nelle continue to wear her game face even as she sets Ava up to take a fall. Across Port Charles, the future isn’t looking great for Peter either, especially since Valentin double-crosses him. While that is likely to put Peter on edge, he’s not the only one. Franco is edgier than he’s been for awhile and Drew and Jason are both a bit frazzled now that Sam is free. And no doubt complicating things even further for Peter, Lulu turns to Anna for advice about what she should do. Take a look at our General Hospital spoilers to learn who is feeling wary.

The Young and the Restless:
Hilary’s week goes from bad to worse. It starts with her making a confession to Devon. If that wasn’t enough to leave her feeling raw, Abby pops up to push her buttons. Meanwhile, Sharon and Nick push very different buttons as they have sex. Cane does his best to be protective of Charlie and his efforts are rewarded by a little surprise from Lily. Across Genoa City, the Abbott family continues to crumble. When Dina’s secret is revealed, Jack starts to spin out of control. While he is unloading his problems on Neil, things are only getting worse for Dina. They aren’t looking up for Kyle either since Victor is testing him and Ashley manages to dig up something that casts her nephew in an unflattering light. Visit The Young and the Restless spoilers to learn who gets a disturbing reminder about their past.