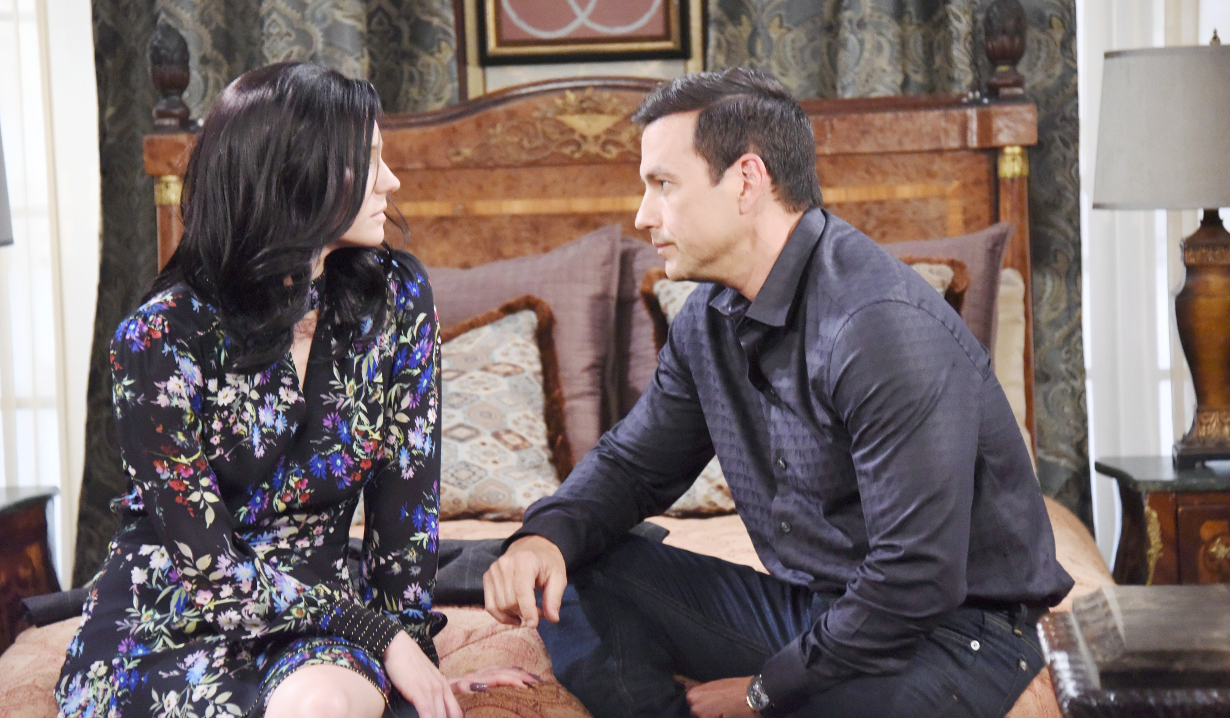 The Bold and the Beautiful:
Bill may have a bullet hole in him, but that hasn’t made him look any more sympathetic to the people who know him best. While Justin and Wyatt are fighting over what to do with the Spencer empire, Hope tips Liam off about Bill popping the question to Steffy. It might take awhile, but Liam finally figures out that his father’s advice to him over the past few months wasn’t as straightforward as it seemed. Meanwhile, Hope tries to convince Steffy that she should be angrier with Bill but Steffy seems more concerned about what Hope really wants. When Liam marches off to confront his father, he’s shocked by what Bill tells him about Ridge. Check out Soaps.com’s The Bold and the Beautiful spoilers to learn who becomes a suspect in the shooting.

Days of our Lives:
After a heated debate, Stefan leaves for Hong Kong with Abby. Once they land, she’s already transforming herself into Gabby. While Stefan attempts to inch closer to her, Hope watches from the distance, confused about who this mysterious woman is. But what will happen when Chad shows up unexpected? Back in Salem, things are running even more chaotically as Gabi goes to trial. Eli does what he can to support her, but the entire event is thrown into pandemonium after Lani takes the stand and makes a confession. Read the Days of our Lives spoilers to find out what’s making Sonny miserable this week.

General Hospital:
Conflicted and confused by everything that’s happened with Franco, Liz turns to Jordan to help her get to the bottom of what to believe. Surprisingly, Jordan is actually useful. Across Port Charles, Franco’s future may be unclear, but Drew’s past seems to serve him well as his instincts kick in. Ava is starting to doubt Nelle’s instincts and thinks that she may be pushing things too far. Nelle is getting annoyed enough to make a move that could bungle things for her. And Jason has a special meeting with Spinelli while Sam tries to sort out her feelings. Take a look at our General Hospital spoilers to discover who has a meeting with Anna.

The Young and the Restless:
Nikki decides that it’s high time that she came forth with a confession, but she may soon regret that when the fallout begins. Jack thinks that Arturo may have something to confess and starts nagging him about Dina. Soon, Jack is hurling his energy elsewhere as the tension mounts between him and Victor once again. The mustache ups the ante and issues an ultimatum, but could Nick’s choice throw Victor’s expectations into turmoil? Visit The Young and the Restless spoilers to learn who gets an unanticipated offer.

Where Are They Now? Martha Madison,...