When Your Favorite Soap Character Has DID, the Mirror Has Two Faces 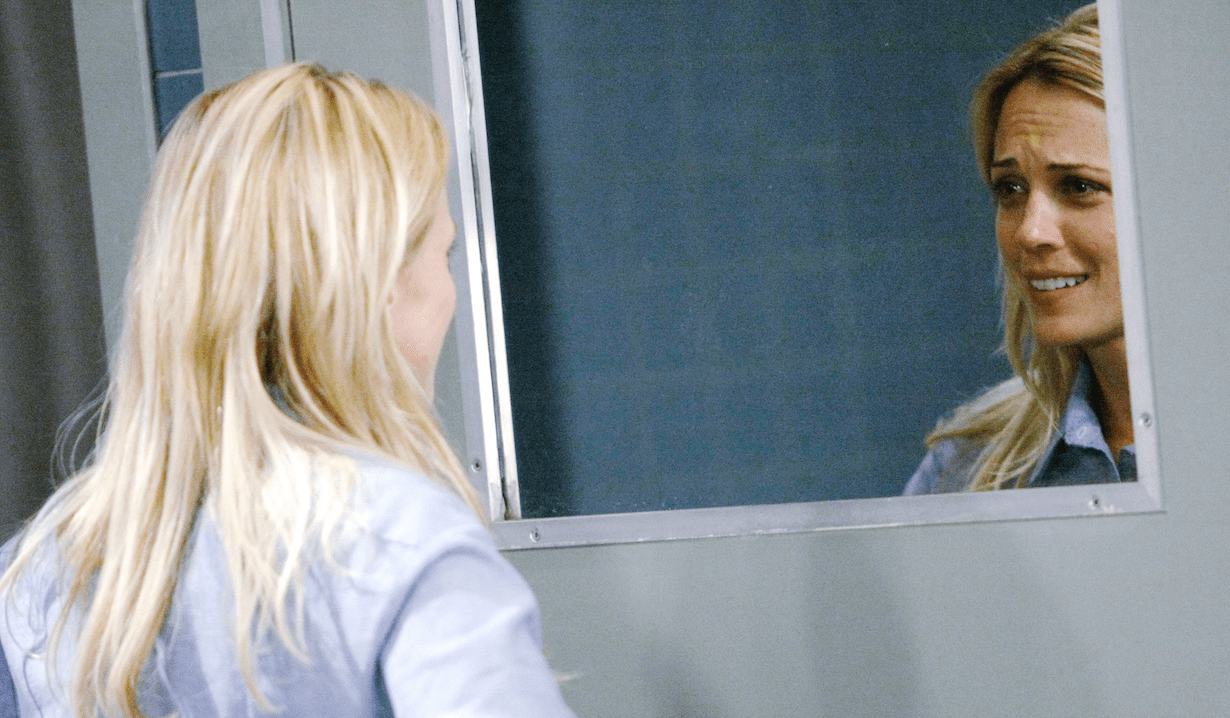 Blackouts, wigs and booze: a recipe for a soap opera split personality.

DID, otherwise known as dissociative identity disorder or multiple personality disorder, is a well-worn soap opera plot device. Sometimes there’s only one personality lurking, but often there are two or three or even six identities battling for control. It usually happens to the straightest of characters, allowing for their portrayer to cut loose and play a “badder” version of their onscreen persona. With Days’ Abigail Deveraux DiMera recently developing DID, Soaps.com thought it was the perfect time to look back at one of daytime’s favorite contrivances.

Sharly came out to play decades after Sharlene’s brother rented her out to his friends when she was a young girl. Though Sharlene was married to John Hudson, Sharly enjoyed the nightlife, especially while on the arm of Senator Grant Harrison. Of course, John discovered her double life and Sharlene got the help she needed to vanquish Sharly. However, her therapist fell in love with John and held Sharlene captive on a boat that exploded. She was presumed dead and John moved on. Sometime later, Kate Baker, who looked just like Sharlene, came to town and was revealed to be another one of Sharlene’s alters who emerged after the explosion. Sharlene eventually resurfaced and reunited with John, but their love story didn’t last much longer.

Kim’s first personality Lacey took over when she was molested by an uncle as a young girl. As an adult, Lacey emerged as a wilder version of her host and was almost raped at knifepoint by Randy Huston. When she fought back, Randy fell on his knife and died. Another alter, Clare, came forward when Kim started to tell her fiancé Phillip Collier about a bloody dress and knife she found, but had no memory of. Then, Clare shot her brother Roman Brady when he came to arrest her for Randy’s death. Though Roman may have had that coming (she’s his sister after all), he survived and Phillip was able to prove Kim was innocent. In the end, it was none other than Dr. Marlena Evans who helped Kim conquer her alters.

More: Where to watch the Daytime Emmys

Sure, Abigail has a past with mental illness, as she set fire to Ben Weston and spent months in an institution before letting all of her loved ones think she was dead. But in the most recent soap opera DID storyline, she’s reached new levels of instability by taking on the persona of her friend and former romantic rival Gabi Hernandez. Not only is she lurking around Stefan O DiMera’s bedroom in a wig as her alter Gabby (or, if you like, Gabigail), but it appears she killed Andre DiMera. Now, another alter has surfaced, believed to be modeled after her grandmother Dr. Laura Horton, who diagnosed her with PTSD when she was away faking her death. While Chad DiMera is enjoying his wife’s new edgier attitude, protector Laura does not like the touch of him one bit. Maybe Chad can borrow the book Stefan’s reading on DID, written by Kimberly Brady, for help when he’s done with it.

Kate Howard grew up as Connie Falconeri, Sonny’s ex-girlfriend from Bensonhurst. Connie changed her name to Kate as a career move, but when Kate started remembering being raped as a teenager and abandoning the son she became pregnant with as a result, Connie came rushing back as her alter. Shortly after the revelation, Kate, who had reunited with Sonny, met her adult son Trey Mitchell, who coincidentally married Sonny’s daughter Kristina Davis. Connie once again came out to play, but she caused an accident that killed Trey. Sonny stuck by Connie’s side throughout the ordeal and those two crazy kids fell in love again, until they had sex causing Kate to return. We’re not sure if that’s technically cheating, but the two personalities compromised, agreed to integrate and went forth as her given name Connie Falconeri.

Carrie Todd came to Springfield a seemingly happy, healthy young woman who caught Ross Marler’s eye. That was not the case though, as she was balancing three personalities named Carrie: one who would blackout, one who would do dastardly things and another who would feel bad about all the trouble she caused. In addition to manipulating men and seducing a teenager, that trouble would include killing two people. She also attempted to kill Ross, who married Carrie after she was acquitted for the murders that were deemed accidental. So, that one might be on him.

More: Comings & Goings for all Soaps

Try to stay with us here. Sonni was Josh Lewis’ first wife, who fell off a cliff to her presumed death. She returned to reunite with Josh, but was later thought to be Solita, who had been impersonating her twin sister Sonni, who killed herself as a teenager. Solita formulated a plan with her first love Will Jefferies to kill Josh, but Reva Shayne grew suspicious. Reva went to Venezuela with her brother Rusty Shayne to discover that Solita was actually the sister that was dead, not Sonni. So, Solita was truly Sonni. Still with us? Turned out, when Sonni was a teenager, her father found her in the throes of passion with Will. He assumed she was Solita and whipped her with a belt. When Solita came home, she was beaten as well, while Sonni was forced to watch. Solita killed herself and Sonni took on her personality.

When Edmund Winslow met Lorelei Hills, who was a dead ringer for his thought to be deceased wife Beth Raines, he convinced her to come to Springfield to con Beth’s ex-husband Phillip Spaulding out of millions. Though she was far more fun loving and unsophisticated than Beth, Lorelei agreed to the con. She grew close to Phillip and started to feel guilty, just as Phillip became suspicious. When he confronted her, Lorelei confessed to everything. She landed in jail, where she had a memory that proved she was in fact Beth, who created the stronger, bolder Lorelei to deal with surviving the flash flood everyone believed killed her. The two personalities battled each other for a time, but Beth eventually won out.

The gold standard of DID stories, Victoria Lord Buchanan had six alters: the notoriously wild Niki Smith, orderly Jean Randolph, angry teen Tommy, young girl Princess, teenaged Tori and a version of the father who abused her Victor Lord. She was integrated many times, but as it made for fruitful storytelling throughout the character’s tenure, it never really stuck. While Viki’s alters did many dastardly things, including Niki pushing Viki’s love Ben out of a window, Jean kidnapping Dorian and Tori setting fire to Llanfair, the worst was probably Niki taking young Jessica to a bar where she neglected her long enough for a pervy dude to molest her. Like mother, like daughter, this caused Jess to play host to her own slew of personalities.

Jess first split off into Tess, the wild child who created a lot of drama. That included falling in love with Nash Brennan, who Jess eventually would leave Antonio Vega for after she was integrated. Again, like her mother, Jess’ integrations didn’t take and Tess continued to force her way back to the surface, like the time she wanted to avenge Nash’s death. That appearance resulted in Tess being present when she gave birth to their stillborn baby, which in turn brought out a second alter, Bess, who switched Jess’ dead baby with Starr Manning’s healthy one. Jess had one more alter in her: Wes Granger, who didn’t know anything about the others and actually thought he was former Navy SEAL Brody Lovett’s murdered friend and former lover of Marty Saybrooke.

After getting caught in an explosion, buttoned-up Mason Capwell was presumed dead. Little did anyone know, he was really living in Las Vegas as his split personality, the hard-drinking lounge singer Sonny Sprocket, who had no knowledge of his previous life. Gina DeMott discovered him, brought him back to Santa Barbara and taught him how to be Mason in order to milk C.C. Capwell out of millions. Despite Mason resurfacing here and there, Sonny remained dominant long enough to marry Gina and get some of that cash. Unfortunately for the schemers, Sonny was shot by a mobster, had an out of body experience and was sent packing by Mason, whose personality finally won out to reunite with his love Julia Wainwright.

Eden was happily married to the love of her life Cruz Castillo when, like her brother Mason, she was revealed to have a split personality. Hers was a jewel thief named Lisa. In an attempt to evade capture, Lisa fell off that ever popular, yet dangerous soap opera cliff and was presumed dead. Alas, she didn’t parish and eventually returned, but as a new personality: an artist named Suzanne. When her mother Sophia confronted her, Eden revealed one more personality, her late brother Channing. As her brother, Eden shot Sophia, who was the reason for the DID in the first place, as she allowed her children to believe she was dead for years. Sophia also accidentally shot and killed her son, who Eden was channeling. Eden left her life and Santa Barbara behind, but did find the time to send Cruz divorce papers.

Are you a fan of DID storylines? Have a favorite? Tell us below!