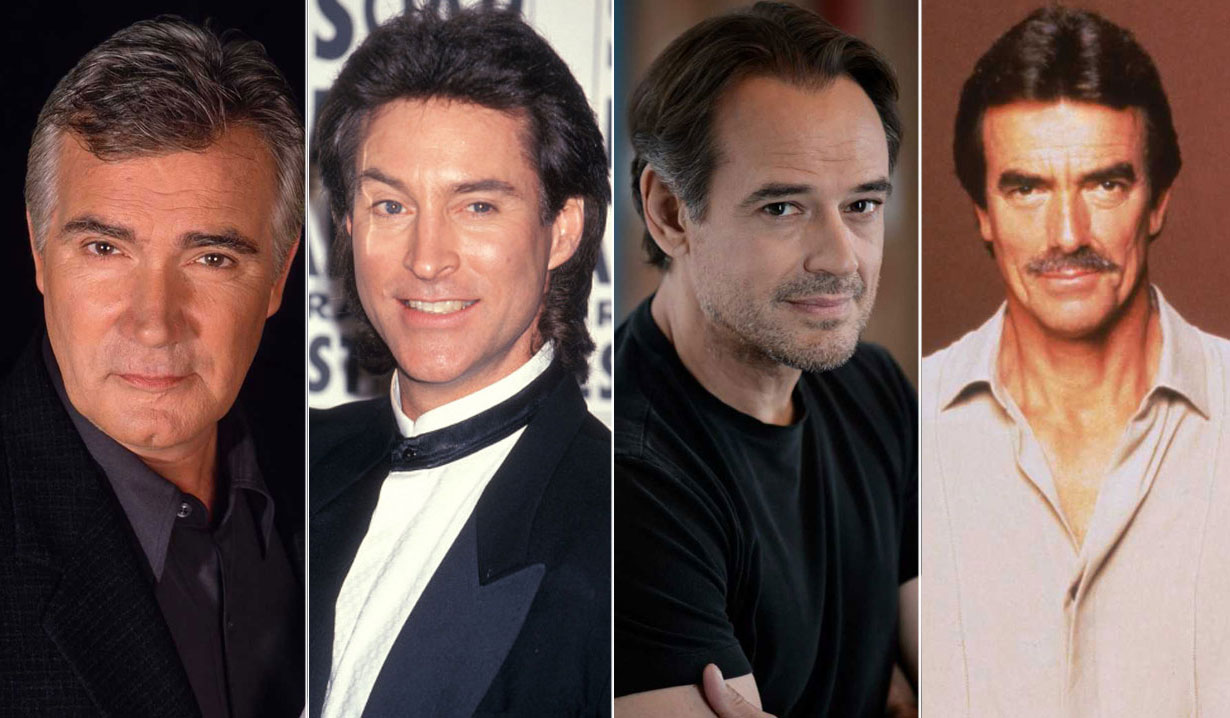 Celebrating men who have embraced their grey.

Every soap has at least one, the older gentleman with a hint of grey in his hair or beard, sometimes covered by color, other times a full out mane of silver. The silver fox, the man who makes women’s and some men’s hearts skip a beat, some having done so for decades before they attained and embraced their grey. Soaps.com decided to take a closer look at some of these distinguished gentlemen, their history, and how they stay in shape. John McCook has playedEric Forrester on “The Bold and the Beautiful” since the show debuted in 1987. McCook was always a bit of a silver fox, and recently added a beard to his now full head of silver hair. In his youth McCook served two years in the U.S. Army, which no doubt led to lifelong healthy habits. He also stays young at heart by frequently returning to the stage to perform plays and musicals. Drake Hogestyn joined “Days of our Lives” as John Black 1986 and has had his character rebooted and reinvented more times than Spiderman and Madonna combined. Hogestyn has always been known for his lush dark locks and chest full of hair. His character seemingly went grey overnight, but in reality, stopped dying his hair 5 months ago and is only now showing on screen due to “Days’” advanced taping schedule. A lifelong athlete, he keeps in top physical form by working out and playing baseball, a game he played in college and later was drafted by the New York Yankees before an injury forced his retirement. John Aniston has played Greek businessman Victor Kiriakis since 1985. For most of his time on the soap he was the man you loved to hate. As he grew older, he started greying and embraced the silver, and the love of Maggie Horton softened his dark side. However, when his family is threatened, the papa bear in him comes out! Aniston is the father of “Friends” star Jennifer Aniston and after college he served in the United States Navy where he no doubt learned how to stay in good health. Wally Kurth, who plays Justin Kiriakis on “Days” and Ned Quartermaine on “General Hospital,” gets an honorable silver fox mention for his strands of grey. He also has the distinction of having an affair with an older woman on one soap, Anjelica Horton on “Days,” and then went on to play the son of the same actress, Jane Elliot, who portrayed Tracey Quartermaine on “GH”. Kurth stays young by competing in triathlons and singing on stage as part of his band Kurth and Taylor. His musical talents have been written into his character on both shows. Jon Lindstrom has played Dr. Kevin Collins and his psychotic and now deceased twin brother Dr. Ryan Chamberlain on “GH” and its spinoff “Port Charles” since 1992. The doctor has always had touches of grey on his temples, and has sometimes sported a beard with a dash of salt and pepper sprinkled throughout. When he’s not portraying the good doc on screen, Lindstrom stays fit through his hobbies, which include skiing, scuba diving, and surfing. He’s also a proficient martial artist and a lifelong drummer. Maurice Benard joined “GH” in 1993 as alleged mobster Sonny Corinthos. The part was only supposed to last six months, but Benard recently celebrated 24 years on the soap. The actor has touches of grey on his sides, and we suspect a full head of silver lies underneath, but is hidden by the products used to slick back his hair for that gangster look. Benard keeps fit as a boxer, which along with the actor’s bipolar disorder, has been written into Sonny’s character on the show. William deVry came onto the “GH” scene in 2013 as media mogul Derek Wells, but was soon revealed to be the long thought dead Julian Jerome. Julian’s character often sports a close tight haircut, but lately we’ve noticed some flecks of silver peeking through, especially when he lets his beard grow out. deVry keeps fit and comes from a long line of athletes. His father lettered in several sports in college and his maternal grandmother held 26 world records in track and field. Eric Braeden has portrayed the devilishly handsome Victor Newman, AKA the mustache, since he was offered the role on “Young and the Restless” for a 26-week run back in 1980. He became so popular, the dynamic actor stuck around as a villain we all love or love to hate. As handsome as he is talented, Braeden stays in shape with boxing, Olympic lifting, and tennis. The talented actor as a younger man was handsome and now, this silver fox is one sexy grandfather. Max Shippee is the newest silver fox on our list, playing Graham Bloodworth on “Y&R” for only a few months. The part was originally supposed to be an under-five role, but Graham has charmed his way into viewers’ hearts, and possibly the pocket book of at least one Genoa City resident. The actor stays fit through CrossFit and has been the owner and head coach of his own gym CrossFit 1440 for over ten years. He holds several certificates in the sport, but also in weightlifting, nutrition, and heart rate training.