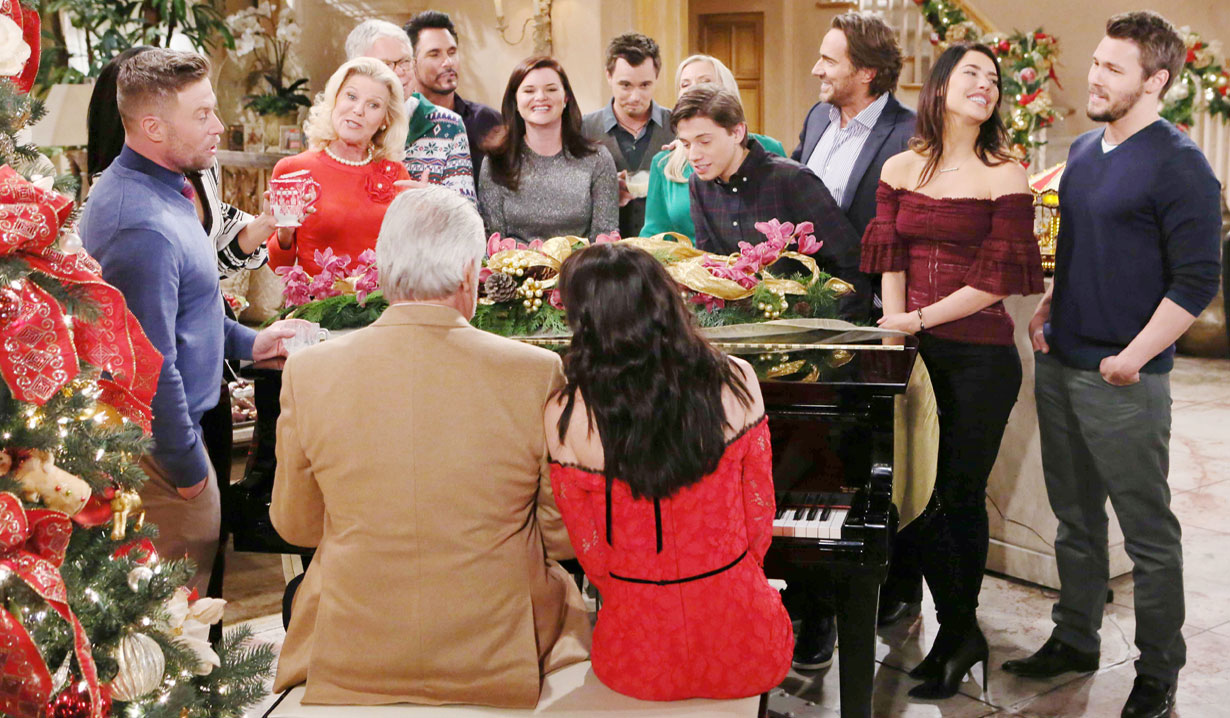 Families come together for the holidays.

Missed any episodes or scenes from last week’s soaps? Soaps.com has you covered with storyline highlights and detailed daily soap opera recaps.

The Bold and the Beautiful:
Katie showed Brooke the video recording of Quinn threatening Liam and both agreed she was dangerous. They knew Eric would make an excuse for the confrontation and planned to rid Quinn from his life. Ridge revealed himself to a naked Quinn, who had an outdoor shower installed as a gift to Eric. After Ridge accused her of controlling Eric with sex, Quinn marched past him naked and went to make love to her husband. Ridge located Rick and confided what had happened with Quinn, who later teased Ridge about having seen her naked. Many debated how to spend Christmas, as Ridge proposed to Brooke with Stephanie’s ring. Brooke said yes, which put a damper on Bill’s holiday spirit. Read the Bold and the Beautiful daily recaps to hear how everyone got along, or didn’t, while spending Christmas at Eric’s.

Days of our Lives:
Philip told Chloe how Deimos kidnapped and drugged him and offered to run away with her to protect Nicole’s baby. After Chloe turned him down, Nicole located her in Chicago, where Chloe went into labor and gave birth to a baby girl. Chloe asked Nicole to name the baby then passed out. Back in Salem, Philip attacked Deimos and announced to Victor, Deimos and Kate that he was leaving Titan and Salem for good. Deimos and Brady received word from Chicago and rescued an unconscious Chloe, Nicole and the baby, who Nicole named Holly. Lani returned and made small talk with JJ, while Abby ran off after spying Chad kissing Gabi. After Abby told JJ, he confronted Gabi about kissing Chad, which led to Gabi dumping him. Many gathered to celebrate Christmas, and hang the Horton ornaments, as Chad and Gabi professed their love prior to Chad finally spying Abby holding Thomas. Read our Days of our Lives daily recaps for details surrounding Chad and Abby’s big reunion.

General Hospital:
Nina disapproved when Valentin allowed Lulu to take Charlotte home with her on a play date. Though Charlotte wanted to return to her father, Lulu told Dante she planned to fight for full custody. Anna recognized a song Charlotte hummed, a song her dad hummed to her frequently, and told Dante she believed she had known Valentin from when she was trained at the WSB. Over at the hospital, Finn had to confide his disease to Brad, who believed he’d been an addict, in order to help Hayden. After Finn warned Hayden the experimental cure could kill her immediately, Liz and Tracy watched as he administered the drug. Tom Baker managed to escape the cage Franco held him in, as his brother Seth Baker appeared in Port Charles and confronted Franco about his whereabouts. Read our General Hospital daily recaps to find out how Tom turned the tables on Franco then ended up dead, and for Sam’s reaction when Maxie provided a gender reveal cake at her baby shower.

The Young and the Restless:
Victor offered to relocate Brash & Sassy to Newman but Jill and Billy refused. Nikki visited Paul to discuss Dylan’s avoidance of her, as Dylan recalled seeing Nikki with Nick and the fact that he wasn’t a Newman. After Faith’s play, arguing ensued between Nick and Sharon, which left Faith screaming that she wanted a divorce from her parents. Later, Dylan, Sharon and Nick noticed Faith had run away, but Victor located her safely in the stables and was later pleased to hear Faith inform her parents that she wanted to stay with her grandparents. Lauren visited Paul at the station, where Chris witnessed him taking Lauren’s hand as she further confided her troubles with Fenmore’s and the fact that she’d kept them from Michael. Gloria jumped out of a box, surprised her family with a visit then grilled Chloe with questions about Bella’s father. Read The Young and the Restless day-ahead recaps to learn who celebrated Christmas together and who wanted to be alone – with a bottle of booze.

Disney Plus Latin America Teams with Filmax, Gloriamundi’s Dominican Dictatorship Series ‘The Roar of the Butterflies’

Call Your Mother Cancelled at ABC