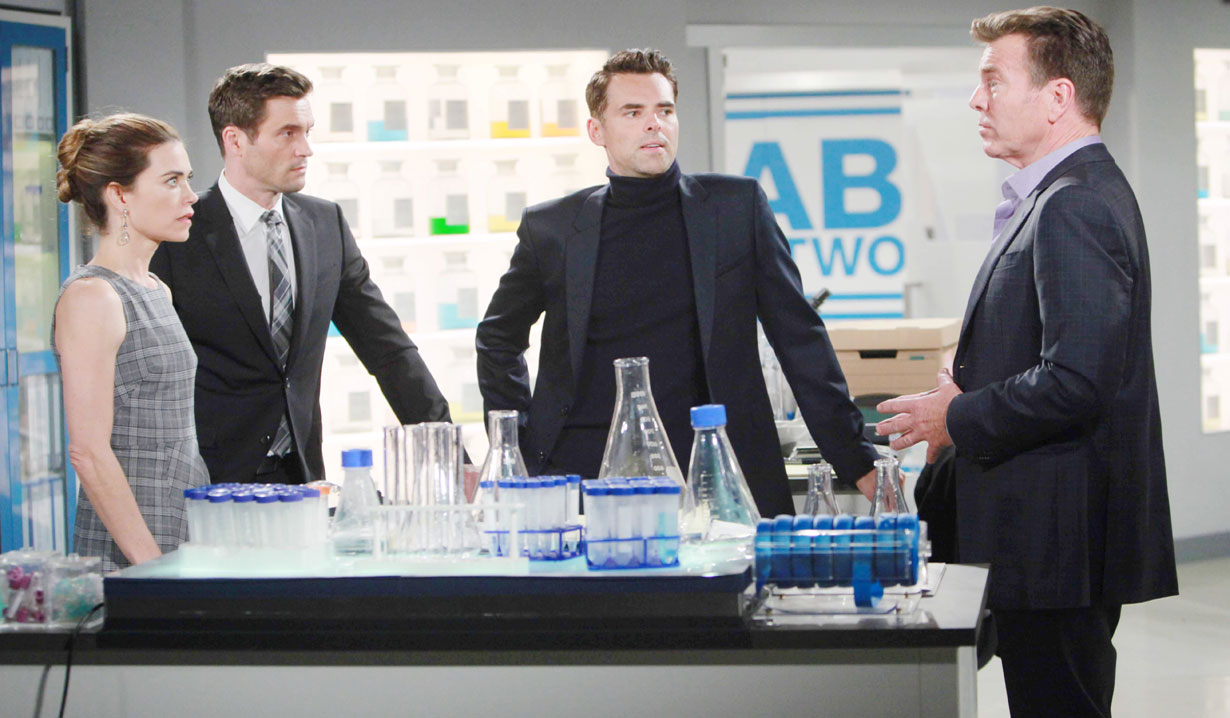 It’s Sunday, which means Soaps.com is taking a look back at the past week’s storyline highlights, as well as inviting readers to get caught up through our in-depth daily soap opera recaps, before a new week of drama unfolds.

The Bold and the Beautiful:
Quinn imagined murdering Katie then accepted an invitation to visit Katie’s new home. Once there, Quinn saw how easily Katie could see the mansion and warned her from being alone with Eric – and kissing him again. Brooke learned about the CEO offer made to Steffy, by Quinn, from Rick and marched over to confront Eric. Though Brooke believed their son should be CEO over Steffy, Eric stood his ground and further infuriated Ridge and Rick by offering Wyatt the head PR position at Forrester. Wyatt agreed to leave Spencer Publications and accepted Eric’s offer, as did Steffy for CEO. Ridge and Rick were then named co-vice president and everyone protested when Eric announced Quinn as the new Forrester president. Read the Bold and the Beautiful daily recaps to hear what new role Nicole took on at the company, as well as Katie’s refusal in regards to Brooke.

Days of our Lives:
Chad told Rafe about Stefano’s unregistered gun. After Rafe shared the news with Hope, and planned for an appeal, Chad assured Hope he no longer blamed her for his father’s death. Chad then unveiled an angel statue, in memory of Abby, who witnessed him leaving his wedding ring behind. While Abby had a panic attack in Dario’s arms, Gabi overheard JJ tell Jenn he didn’t know how much longer he could keep ‘her’ a secret from Gabi. Gabi went over to Chad’s, where Abby and Andre caught them in a passionate kiss. Jade was rushed to the hospital for cramping, as Adrienne leaned on Kate after learning she had to undergo a double mastectomy and chemo. Brady stopped Deimos from injecting Philip with another dose of truth serum at the Inn. Deimos admitted his belief that Philip had been keeping a secret, that Chloe could possibly be carrying Nicole’s baby, and later learned Chloe had another IVF procedure in May. Read our Days of our Lives daily recaps for details on Chloe’s sudden text to Nicole.

General Hospital:
Jason realized something happened between Sonny and Nelle and urged Sonny to tell Carly. Sonny refused and asked Jason to keep his secret. Jason and Curtis continued their investigation into Julian’s car bombing, unaware that the mysterious person Julian had been in contact with was spying on them. Kiki summonsed Tom Baker to Franco’s art studio but left before he arrived to a dark painting of himself. Franco knocked Tom out, shoved him in a dog cage and threatened to shock him via a collar when Tom awoke. Later, Franco hid Tom from Liz, who asked him to leave Tom alone. Elsewhere, Valentin explained how Helena paid Daphne to collect his sample in order to make a Spencer-Cassadine baby for Stavros. After a DNA test confirmed Charlotte’s paternity, Lulu asked if Dante could love her daughter as his own. Read our General Hospital daily recaps to find out why Finn’s lizard, Roxy, gave him hope of saving Hayden.

The Young and the Restless:
Sharon stopped Hilary from sabotaging Mariah’s GC Buzz hosting debut, but Mariah ended up falling on her face anyway, literally. As Mariah’s fall went viral, she wondered if Hilary had been to blame. Hilary was stunned to learn Mariah had not only been trending on social media but had received rave reviews. Just when things looked bleak for Hilary, Jack offered to help her find other work via an agent, who Hilary ended up using in order to bring Devon groveling back to her. Nick received an offer as well when Victor suggested he run Newman – without him. Elsewhere, while Phyllis worked to help with Fenmore’s online expansion, Jack showed interest in taking over control of Lauren’s company. But that’s not all… Jack also ordered Brash & Sassy, and its employees, out of the Jabot building by New Year’s Eve. Read The Young and the Restless day-ahead recaps to learn why Phyllis changed her hair color and how Vikki lost control.

Where Are They Now? Arianne Zucker,...

Posted 26 mins ago
Back to Top
ad