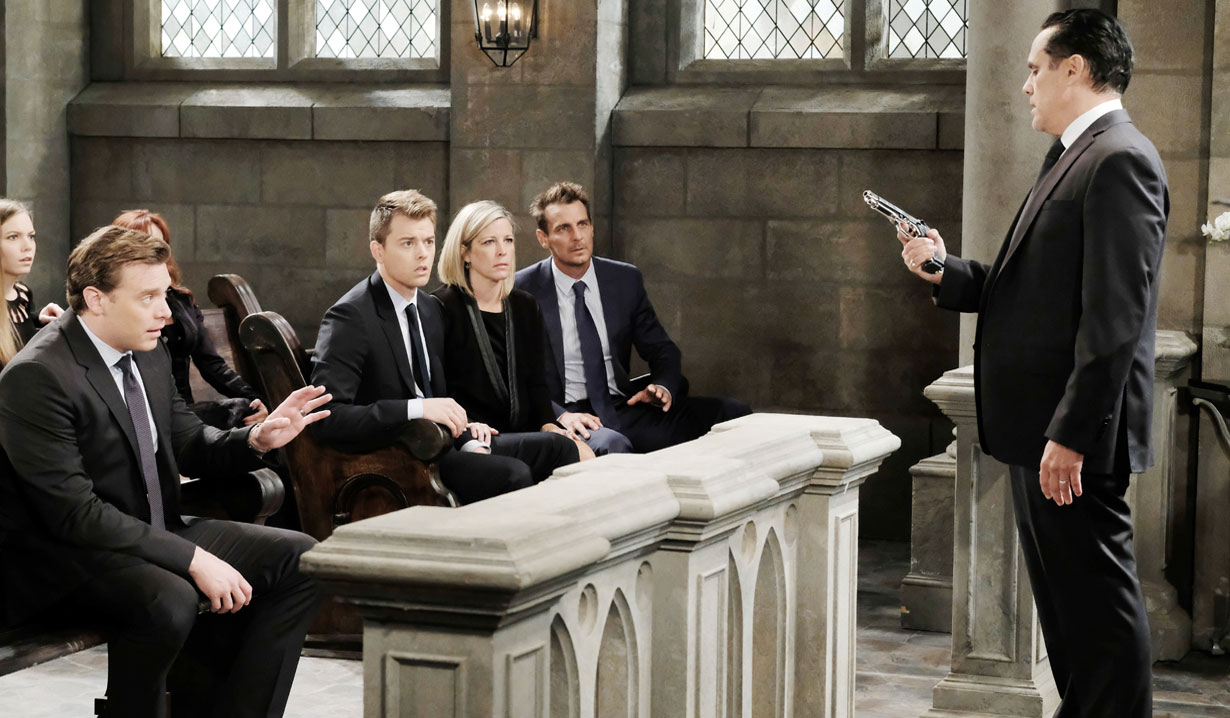 Many come together in grief, as chaos erupts at Morgan’s funeral.

It’s the end of another week and Soaps.com has a rundown of storyline highlights and in-depth daily soap opera recaps for your reading pleasure before a new week of drama begins.

The Bold and the Beautiful:
Ridge left the fashion show irked that Quinn took control, as Quinn returned home and found two champagne glasses, one with lipstick on the rim. After Eric explained Katie’s visit, Quinn called Katie and warned her against stopping by the mansion unannounced. Later, Katie expressed interest to Eric in buying the house next door. Though she told him about Quinn’s call, Eric convinced Katie to buy the house and insisted Quinn would enjoy having her around, which infuriated Quinn. Ridge stopped by Brooke’s, urged her to commit to a future with him then left. Bill arrived soon after and agreed to spend the day with RJ, at Brooke’s request, after she insisted he was the man she wanted to marry. Read the Bold and the Beautiful daily recaps to learn how Bill and RJ’s time together panned out, as Ridge took Brooke to a very important place.

Days of our Lives:
Hope went before the judge, where DA Trask suggested death by lethal injection. However, the judge sentenced Hope to 25 years in prison without parole. Andre made plans to introduce a new villain to Salem, as Abby made her presence known and thanked Andre for faking her death. Abby then revealed herself to Jenn, who at first fainted then hid her daughter from JJ. Victor summonsed Kayla to the mansion to help Theresa, who’d overdosed on pills. After she recovered, Theresa expressed to Mateo that Brady hadn’t been buying her act. Mateo came up with a plan to alienate Brady, and it wasn’t long before Brady barged into the Salem Inn on a half-naked Theresa with Guillermo and some cocaine. Brady finally turned his back on Theresa, who left Salem with Mateo. Elsewhere, Gabi refused to forgive JJ for cheating. Read our Days of our Lives daily recaps to hear who interrupted Lucas and Adrienne’s wedding, as Joey blurted out the news to Steve that Jade was pregnant.

General Hospital:
During Morgan’s funeral, Sonny credited his violent lifestyle as the reason for his son’s death and agreed to accompany Jordan to the station for questioning. Jason snuck into the interrogation room and informed Sonny that he hadn’t been responsible – the hit on Julian had been called off in time. However, Jordan arrested Sonny for Julian’s attempted murder and Morgan’s death, as Julian took a call from a thought-to-be ‘dead man’ – Oscar Jessup. Elsewhere, Scott agreed to steal Morgan’s pills back from Lucy for Ava, who continued to grieve her former lover. A DNA test proved Valentin was Charlotte’s father, which left Nina happily playing mommy to the little girl. Franco went to Tom Baker’s, Liz’s rapist, house and got into a physical altercation with him. Meanwhile, Jax met with Alexis and admitted he’d kept a secret from Carly, about Joss’ donor, and wasn’t sure if Nelle had uncovered the details. Read our General Hospital daily recaps to find out what happened after Tom joined Alexis for a drink, as well as Liz’s reaction to seeing her rapist for the first time in years.

The Young and the Restless:
Jack kissed Phyllis but warned he wouldn’t be lured in by her ever again. Sharon went to Hilary and told her side of the story surrounding Christian live on GC Buzz. It wasn’t long before Sharon was arrested on kidnapping charges. After Dylan asked Nick not to press charges, Nick got Sharon released then had her and Dylan accompany him to Christian’s birthday party. Elsewhere, while Billy scolded Vikki for having been too hard on her boyfriend, Travis had sex with Michelle. Later, Travis returned to Vikki and professed his love, as Billy spotted an incriminating text from Travis on Michelle’s cell. Billy learned from Ashley about Travis and Michelle’s past affair then confronted Travis, as Michelle admitted to Ashley that she’d slept with her ex. Ashley then warned Travis to confess to Vikki and told Billy that Travis had cheated. Read The Young and the Restless day-ahead recaps for Billy’s reaction to finding Travis on one knee in front of Vikki.

Where Are They Now? Alums in First...