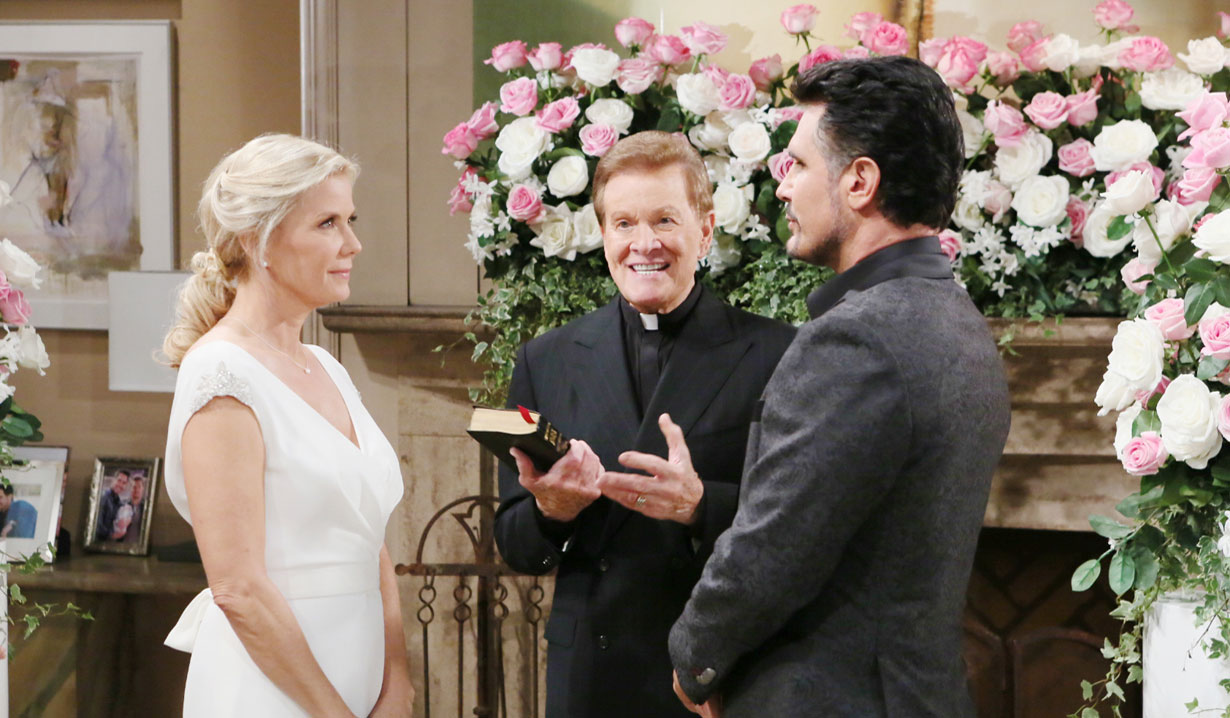 Happy moments take a turn for the worse for some, as devastation rocks others.

Get a quick refresher on last week’s episode highlights and read Soaps.com’s daily soap opera recaps for a closer look into what went down on your favorite soaps.

The Bold and the Beautiful:
Bill felt as though Ridge tainted their special day and called off his wedding to Brooke. Ridge heard the news from RJ and promised to reunite their family. When Eric learned how his family planned to use Bill’s shares to take over Forrester, he announced to them all that Quinn was in charge of the upcoming fashion show. Later, Steffy had her wedding ring tattoo removed then moved in with Liam. As many celebrated Halloween at Forrester, Nicole broke the news to Zende that she planned to carry another baby for Rick and Maya. Zende walked out on Nicole, accepted Sasha’s kiss and convinced her to fly to Hawaii with him. Nicole was stunned to hear about their spontaneous trip. Read the Bold and the Beautiful daily recaps to learn whether or not Nicole changed her mind after Rick and Maya gave her an out to being their surrogate again.

Days of our Lives:
Orpheus explained how Lazlo helped him fake his death then lit nailed coffins, containing Marlena and Kayla, on fire. Though John and Steve ended up saving the women, Orpheus was killed. During the Halloween fundraiser everyone was stunned to hear the recording of Hope’s murder confession. Later, Chad arrived at the PD in time to hear Hope officially confess to Stefano’s murder. Hope made a deal with Andre to plead guilty, in order to keep Rafe and Roman out of the mess, which led to her arrest. Theresa was shocked to find Shane in place of the priest in the confessional at St. Luke’s. After Shane warned that a man from her past, Mateo, the head of a drug cartel, had tracked her to Salem, Theresa came face to face with Mateo, who demanded she return to Mexico with him. Desperate, Theresa went to Victor and asked that he have her ex taken out then decided to handle Mateo herself. Read our Days of our Lives daily recaps to find out who Chloe revealed to be her baby’s father and who teamed up to buy The Spectator.

General Hospital:
Valentin produced a letter stating Nik had turned Wyndemere over to him. He then tried to charm Nina, who didn’t give him a second thought until he commented on her baby book and the fact that he was very fertile. A photo of a young Anna consumed Valentin’s thoughts, as he headed over to Alexis’ next, asked her to be his legal consultant and offered to share Wyndemere with her. Alexis warned the exchange of Wyndemere hadn’t been legal. Jason found Sonny manhandling a trick-or-treater outside his house after hallucinating that the guy was Morgan. Later, as Curtis admitted to Jason that Sonny had been connected to Julian’s car bombing, Carly read Morgan’s journal, which stated he’d taken his meds daily. Ava received a shock as well in the form of a mysterious message where the caller claimed to have known what she’d done to Morgan. All the while, Nelle caught Sonny planning to leave town for good just as someone was shot while being questioned by Jason and Sam. Read our General Hospital daily recaps for Lulu’s reaction to news about her embryo, as Griffin made plans to have a DNA test ran on Charlotte.

The Young and the Restless:
Dylan visited Patty, who kept quiet about Sharon’s secret but called Nick to spill the beans that Sharon had Christian. Nick confronted Sharon, who admitted the truth then was forced to tell Dylan that Sully wasn’t his son. Nick suggested Dylan arrest Sharon then agreed to come back to retrieve Christian in the morning. Chelsea went to Victor about their secret – that Christian was really Adam’s son, to which Victor convinced Chelsea to stay quiet and allow Nick to raise the boy as his own. Later, Abby was stunned when Victor admitted to having set up the leak at Newman, which fed Jack and Phyllis false information. After Billy got Natalie drunk, and learned Victor had been trying to set Jack and Phyllis up, he reported the news to Phyllis who in turn told Jack – but it was too late. Read The Young and the Restless day-ahead recaps to hear what Jack had to do in order to undo the mess he’d gotten himself into.

Where Are They Now? Lori...