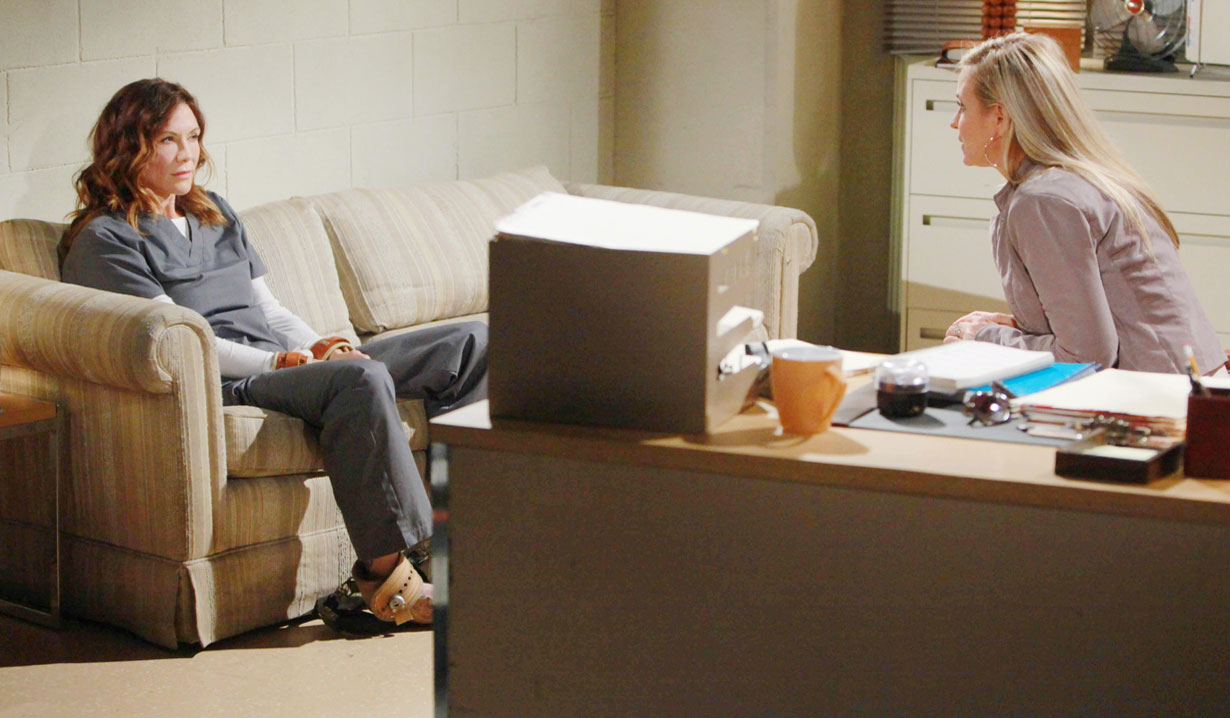 A secret that could destroy a family for good.

Soaps.com has storyline highlights and daily soap opera recaps of last week’s episodes in order to keep readers caught up on the drama before a new week begins.

Watch as Cathy Rankin discusses all this week’s happenings in the Soaps.com Round-up!

The Bold and the Beautiful:
Quinn and Wyatt infuriated everyone at Forrester by throwing around the authority given to them by Eric. Later, Brooke professed her love for Bill and warned Ridge she wouldn’t get an annulment after turning over Bill’s Forrester shares. On the day of the wedding, Wyatt agreed to stand up for Bill, as Ridge let RJ in on the plan to get Bill’s shares and insisted Spencer’s marriage to Brooke wouldn’t last. RJ asked his father which he wanted more, the shares or Brooke, and urged Ridge to fight for the woman he loved before it was too late. Ridge rushed over to Bill’s, found Brooke upstairs in her wedding gown, professed his love and begged her not to marry his nemesis. Read the Bold and the Beautiful daily recaps to find out how the drama unfolded when Bill found Brooke with Ridge, as well as Nicole’s answer to Rick and Maya’s request that she be their surrogate again.

Days of our Lives:
Rafe told Roman about Aiden’s blackmail, but before he could confess to Stefano’s murder, to rid Hope of Aiden, Aiden and Hope appeared and shocked everyone with Aiden’s resignation and plans to give Hope a divorce. Little did anyone know, Andre had a copy of Hope’s murder confession. Abe’s former flame Valerie arrived at the hospital. When complications arose after she operated on Abe, Theo accused Valerie of trying to kill his father – and Orpheus turned up very much alive. Elsewhere, Victor urged Deimos to take his baby from Chloe and to ask Nicole about the child she lost. He then stunned the family by announcing his retirement and that he’d signed over control of Titan to Deimos. Eddie made a business deal with Dario as well, to use the club to front other activities. Read our Days of our Lives daily recaps to learn what surprising announcement was made at the DiMera sponsored Halloween charity fundraiser and how the hospital’s magic show took a dark turn.

General Hospital:
Carly berated Kiki for hurting her son, as Ava admitted her guilt over Morgan’s death to Scott, who told Sonny he had everything coming to him, including losing his own son. As Sonny grabbed Scott by the throat, Carly slapped Julian hard across the face for his comments about Morgan as well. Later, Robin found Sonny holding a gun to his head, debating whether or not to take his own life. Elsewhere, as Jason and Sam told Danny about the pregnancy, Franco confessed to Liz that he’d fallen for her. In his room, Finn finally gave in to his feelings for Hayden and took her in a passionate kiss. Maxie managed to get in touch with Nathan, who with Dante’s help rescued her from the basement. Claudette left Charlotte behind with Griffin and boarded a flight to Calgary, where Valentin made his presence known. Read our General Hospital daily recaps for Nathan and Maxie’s reaction to some disturbing video footage.

The Young and the Restless:
Jack filled Phyllis in on how he planned to further his revenge plot against Victor then forced her to sign divorce papers. Elsewhere, Victor hired Michael to sue GC Buzz for running the story on him then listened to Natalie, who went behind Travis’ back, and reported that Vikki’s boyfriend believed the person who leaked info to Hilary could be a Newman family member. As Jack caught Travis digging in a trashcan, Abby spied Phyllis doing Jack’s dirty work. Nick believed Sharon was hiding something, as Dylan arrived home and demanded Sharon tell him why Patty was so obsessed with her and Sully. Paul ordered Patty’s doctor to uncover what happened with Dr. Anderson and Sharon then alerted Dylan and Sharon that Patty had been transferred. After Patty summoned Sharon for a visit, Dylan insisted on joining her at Rivercrest, where Patty made Sharon a nervous wreck in front of her husband. Read The Young and the Restless day-ahead recaps to hear what had Nick losing control.