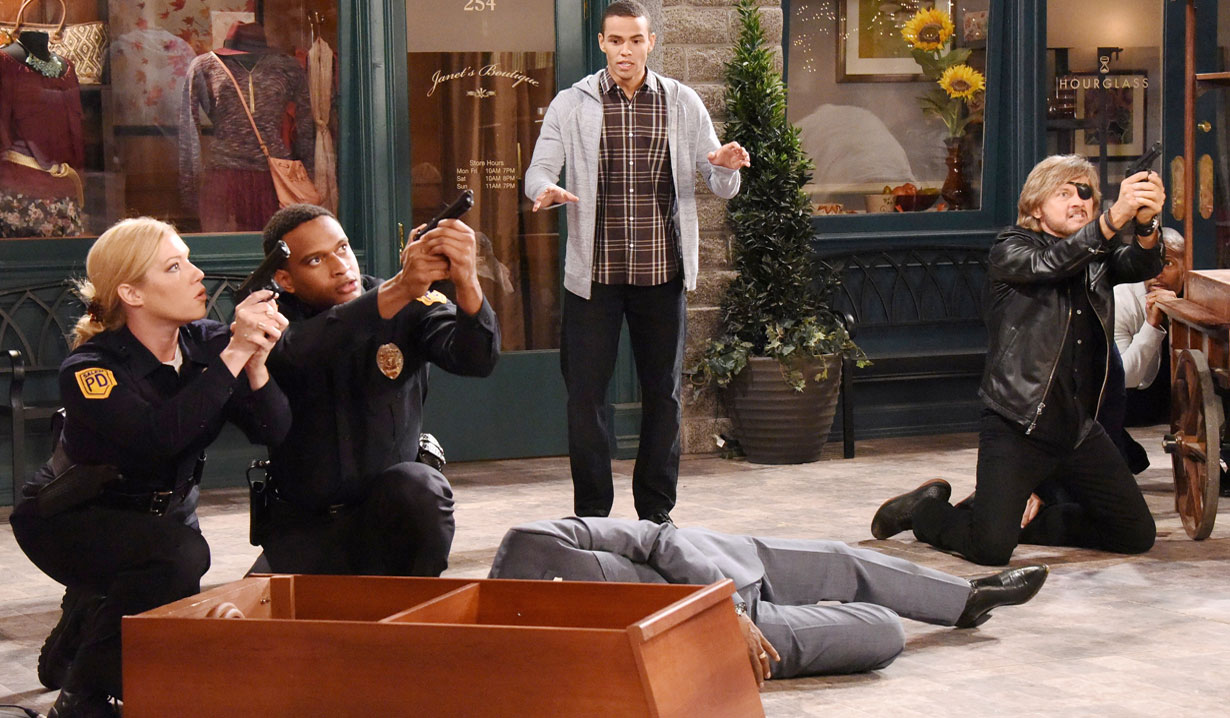 If you missed any of the action packed episodes this past week, Soaps.com has a rundown of highlights and daily soap opera recaps leading up to the cliffhangers before a new week of daytime drama begins.

Watch as Cathy Rankin dishes on all the highlights from last week’s shows in the Soaps.com Roundup.

The Bold and the Beautiful:
Quinn tried to stop the wedding for fear of causing further issues with Eric and his family. Eric reminded Quinn that his family made a choice to turn their backs on him and refused to allow them to ruin their day. Eric and Quinn were pronounced husband and wife. As Eric replaced Stephanie’s portrait with one of Quinn above the fireplace, Ivy went to Forrester, announced the wedding news and scolded the family for breaking Eric’s heart. Felicia and Thorne began regretting the boycott but Ridge and Steffy held their stance. It wasn’t long before Eric angrily confronted them all, which resulted in him collapsing to the floor due to a brain hemorrhage. Read the Bold and the Beautiful daily recaps to find out what Quinn did after Ridge had her banned from Eric’s hospital room, as well as what shocking find Carter came across at the Forrester mansion.

Days of our Lives:
Nicole told Deimos about Chloe’s history with Leukemia and berated him for ordering a DNA test, as Phillip assured Chloe that Kate agreed to change the paternity results. After Kate managed to escape Clyde and Orpheus’ clutches, she went to meet Dr. Wright, who already had the results and announced that Deimos wasn’t the father. Everyone was stunned, including Chloe, and Philip later walked out on her for making him look like a fool. Elsewhere, John saved Marlena and Claire from Clyde and Orpheus and ended up shooting Orpheus. Orpheus tended to his wound then set back out on the task at hand and kidnapped Claire, who joined Joey as a hostage. Abe was soon caught in the crossfire and ended up shot by Clyde during a press conference. Clyde continued on his rampage and ended up firing shots at John and Steve, who tried to save Claire and Joey. Read our Days of our Lives daily recaps to learn how Aiden overheard Rafe and Hope discussing Stefano’s murder, which led to Aiden confronting Hope.

General Hospital:
Charlotte’s DNA results came back, which proved Nathan was the father of Claudette’s child. While Maxie tended to an upset Griffin, Claudette admitted to Nathan that the man she’d been hiding from was Valentin Cassadine. At the chapel, when Tracy overheard Paul admit he killed Sabrina, she assumed he felt responsible for her death, for not finding the killer, and Paul allowed her to believe that. Tracy told Dillon that Paul had taken Sabrina’s death hard due to the distance between him and Susan then tracked Paul to a facility and was stunned to find him talking to a withdrawn Susan – and even more shocked to overhear him confess to the hospital killings. Paul spotted Tracy and later held her captive as he explained his reasons for the killings, which surrounded Sloane raping Susan. Read our General Hospital daily recaps for Paul’s reaction upon Anna and Dillon finding him about to kill Tracy, and how Laura responded to her unexpected travel companion.

The Young and the Restless:
Phyllis informed Billy she wanted Jack back, as John’s ghost appeared to Jack and urged his son to forgive Billy – like John forgave Jack for sleeping with Jill. Though Billy apologized to Jack and pushed him to take Phyllis back, Jack refused and demanded a divorce. In turn, Phyllis refused Jack’s big settlement but agreed to a divorce if he kept her on at Jabot. Elsewhere, Travis turned down a job at Newman from Victor, then ended up accepting the offer, as Devon bought GC Buzz. During Faith’s big birthday bash, Mariah voiced her concerns about Chloe hiding Bella’s father, as Faith made a special wish involving her father and Chelsea. Not only did Faith’s wish come true, she also happily accepted a gift from Victor – a piece of the family business, Newman shares! Later, Dylan arrived home and received yet another mysterious hang-up. Read The Young and the Restless day-ahead recaps to hear what disturbing message Patty had for Sharon.